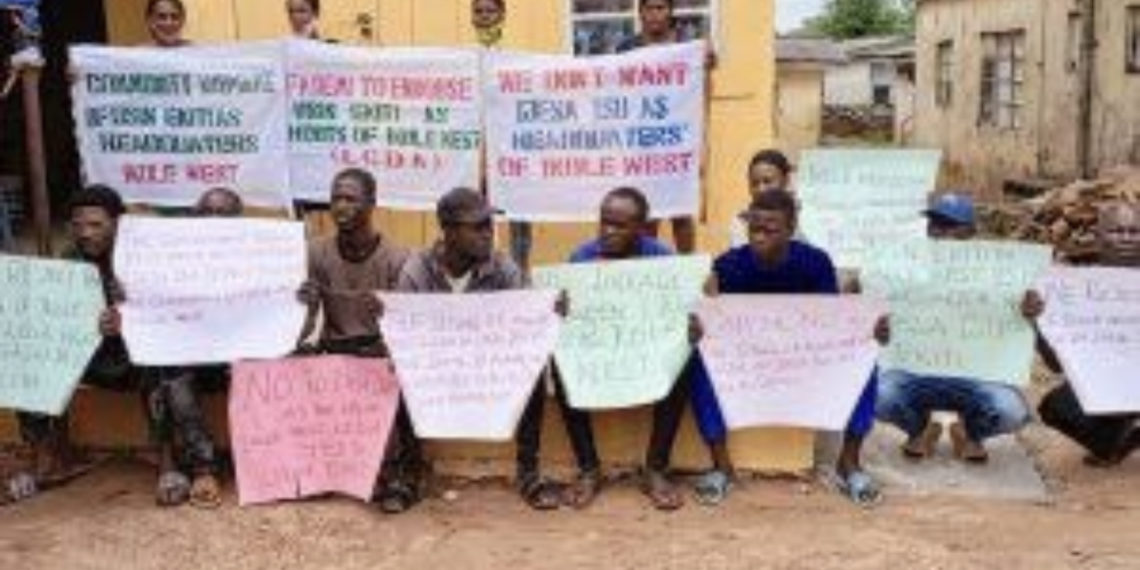 A spokesperson for the communities said "some powerful forces were behind the action."

Traditional rulers from seven communities in the newly created Ikole West Local Council Development Area of Ekiti on Wednesday appealed to Governor Kayode Fayemi to relocate the council headquarters from Ijesa-Isu to Usin-Ekiti.

They made the plea at the temporary Secretariat of the LCDA in Asin-Ekiti, where they staged peaceful protest with their subjects, expressing dissatisfaction on the location of headquarters in Ijesa-Isu.

Addressing the protesters on behalf of other traditional rulers, the Olotunja of Ootunja-Ekiti, Adedeji Fagbamila, thanked the protesters for their peaceful conduct.

Mr Fagbamila urged them not to take the law into their hands by resorting to violence.

“We are in support of your rightful agitation, because it is your future that is at stake and your inalienable right to self-determination.

“I assure you that our amiable governor has no hand in this purported location of the council secretariat at Ijesa-Isu.

“But we want to assure you that this is an error that cannot see the light of the day,” the traditional ruler said.

Also, Lanre Ayejuyo, who spoke on behalf of the communities, said, “some powerful forces were behind the action and the development is injustice and unfair”.

According to him, locating the headquarters at Ijesa-Isu is against the interest of seven other communities and it is injustice.

“But, we are just appealing to Governor Kayode Fayemi and the Chairman, LCDA Creation Committee to consider our initial proposal which was defended at the House of Assembly that the headquarters of the council be located at Usin-Ekiti.

In his remarks, Bayo Ayeni, the Chairman, Ikole West LCDA Implementation Committee, said, “We have been on this struggle since 2014 during Governor Kayode Fayemi’s first tenure.

“We presented our memorandum, which contained our demands before the state government when the LCDA idea was being proposed.

“We even provided infrastructure, including a befitting edifice for the take-off of the council secretariat before the last administration truncated the process,” Mr Ayeni said.

In his reaction, Olawale Fapohunda, the State Attorney-General and Commissioner for Justice, said the LCDA Committee was looking into the communities’ agitations and would do justice to all the complaints.

Mr Fapohunda then advised the people of the seven communities to be patient.

“Decision will be taken to rectify all the anomalies in the creation of the LCDAs.

“Please wait for the state government’s decision; but we appreciate your peaceful way of showing your displeasure,” he said.

The Ekiti LCDA Bill was passed by the state House of Assembly on August 4 and signed into law on August 6 by Governor Fayemi.