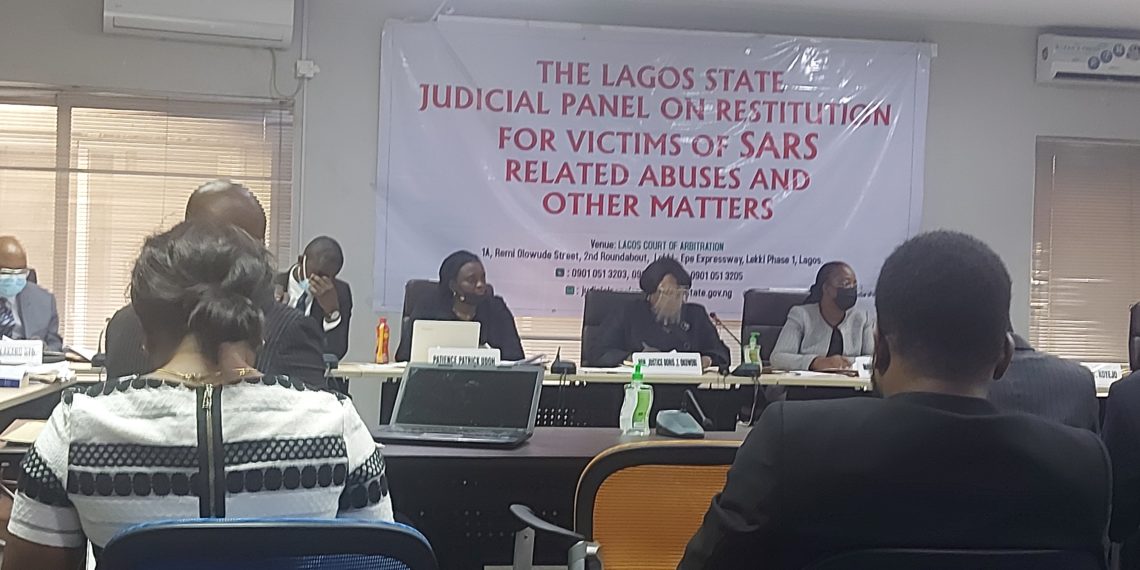 Member of the Judicial panel

In two different petitions, the families of Gabriel Ayoola and Ayodele Solaja accused the police of killing the victims extrajudicially.

The family of Ayodele Solaja Tuesday told a Judicial Panel of Inquiry that police officers lied to them after extrajudicially killing their son in August 2019.

The family showed the panel a video of police officers shooting the deceased after they handcuffed him.

In a sworn affidavit deposed to the panel, the elder sister of the deceased, Seun Bamgbose, narrated the events that led to the killing of Mr Solaja. She said the deceased, who was a youth corps member at the time, came to her house for the Sallah holidays and left the house to socialise with his friends in the neighbourhood at about 2 p.m.

She said she was informed on the following day by one Francis that her brother and one other person, identified as Oghenenovo Ebobo, had been shot dead by police officers from Adoff Police Station, Iba.

“Francis recounted the event he witnessed that at around 3 p.m. on the 19th of August, 2019 that the policemen serving at the Adoff Police Station came fully armed and stormed Mission Street Iba Estate where my brother Ayodele Gabriel Solaja (now deceased) in the company of one Ogheneovo Ebobo and some others were drinking.

“That the people drinking there were terrified by the aggressive police presence and dispersed in various directions and the police pursued them. That my brother Ayodele Gabriel Solaja (now deceased) and Oghenevo Ebobo were arrested and brought in alive into the operation bus of the policemen, a yellow minibus popularly called Korope.

“That the policemen after a little while brought out my brother and Oghenevo Ebobo from inside the bus and shot them point-blank, with a rifle killing him instantly. That the policemen later planted two pistols and five expended shells or bullet casings on Ogheneovo Ebobo,” she said.

The killing of the victims was captured by an unknown person and was publicised on social media. The family presented the footage from an online site, Instablog9ja, which they played at the panel showing how the officers shot at the victims.

Mrs Bamgbose said the police refused to release the corpses of her brother and Mr Ebodo, claiming that her brother ran away while being taken to the hospital by the police.

She, however, said the viral video led to the arrest of the killer police officers who were identified as Fabiyi Omomuyiwa, Olaniyi Solomon, Solomon Sunday, and Aliyu Mukaila. They were dismissed from the police force and arraigned before the Ebute Meta magistrate court on conspiracy to commit murder and causing death.

“To our shock, the office of the Directorate of Public Prosecution, Lagos State, issued legal advice exonerating the quartet of Fabiyi Omomuyiwa, Olaniyi Solomon, Solomon Sunday and Aliyu Mukaila from the case of murder against them claiming that my brother was an armed robber who died in an exchange of fire with the police and they were set free from prison custody,” her written affidavit read.

The petitioner, through her counsel, Adeshina Ogunlana, tendered different documents to support the case.

Mrs Bamgbose said immediately the suspects were released from the Ikoyi Prison custody, the family lawyer, Mr Ogunlana, wrote a protest letter to the Attorney General and Commissioner of Justice, Lagos State, after which new legal advice came from the DPP’s office directing the prosecution of the four men for murder.

Meanwhile, the officers are yet to be arraigned because they were said to have fled and could not be located.

The family urged the panel to compel the state government to apprehend the four killers and bring them to justice.

They also demanded compensation for the hurt caused to the family by the killing of the victim.

In the second petition, Jude Balogun, who represented the family of Gabriel Ayoola, said he was present at the scene of his killing on October 21, 2020, at Ojodu Berger.

Mr Balogun, in a sworn affidavit deposed to the panel, said the deceased was hit by a bullet while the police were trying to disperse protesters who came out in the morning of October 21, 2020, a day after the Lekki shooting incident.

Mr Balogun, who is an agent of the Nigerian Aviation Holding Company (NAHCO), said he was compelled to go out that morning to check on his cargoes which he hurriedly left the night before due to the imposition of curfew by the state governor.

“On stepping out into the street of my area at Ojodu, I saw a group of protesters, numbering about two hundred, peacefully protesting. They held Nigerian flags and were chanting “End Bad Governance with other calls and response chants that expressed dissatisfaction with the state and reflected their aims and goals as they were moving on.

“During the procession, from where I was, far behind the protesters, I saw police officers from Ojodu Police Station of Lagos State Police Command shooting into the crowd with the protesters fleeing in different directions,” the affidavit read.

Mr Balogun said after a while, another round of gunshots was released by the police officers, shortly after which Mr Ayoola was hit and found lying in the pool of his blood in front of Ojodu police station.

He told the panel that he and other youths around rushed the victim to the Mother and Child Hospital at Ojodu, where he received first aid treatment before he was referred to the Lagos State University Teaching Hospital (LASUTH) for treatment.

Mr Balogun said the victim was hit on the head and suffered excessive bleeding and by the time they got to LASUTH, he was already in a coma.

“All the while he was on hospital bed, I could not establish his name and identity because he was in a coma and for the purpose of conducting surgery to extract the bullet from his head, I called him the ‘Michael’ because I heard people calling him ‘Michael’ but I was not sure that that was his real name.”

Mr Balogun said he could not contact any of his relatives as he did not know the victim prior to the incident and had to take responsibility for him at LASUTH before his relatives came around after a notice he posted on the social media.

“Gabriel was in the hospital for three weeks but died on the 12″ day of November 2020 and the consultant in charge of his case is Dr. Ayodele. The hospital has refused to release the bullet to me or his relatives,” Mr Balogun said.

He said LASUTH also refused to give the autopsy report of the deceased to his family and the doctor in charge later claimed he died of COVID-19.

Mr Balogun presented the LASUTH hospital request card for the radiological examination of the deceased, his picture on a hospital bed, videos of him being taken to the hospital and a video showing him lying in front of Ojodu police station to the panel.

Doris Okuwobi, the chairperson of the panel, adjourned the matters to September 10 and 14 respectively.

ANALYSIS: How Nigeria plans to meet low carbon pledge by 2030