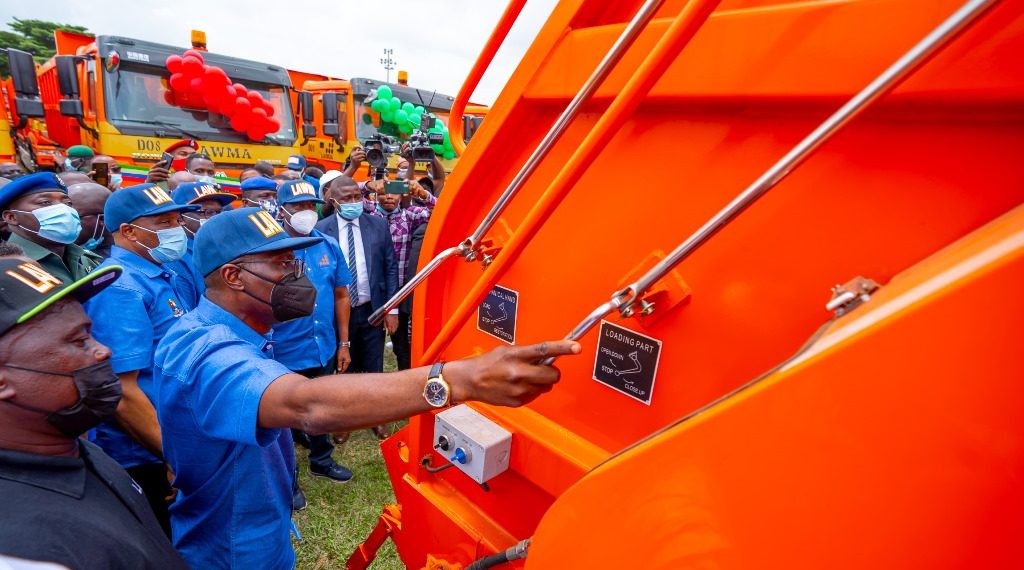 The governor said N1 billion is being invested in the construction of three new transfer loading stations to provide the necessary infrastructure to facilitate the effective delivery of solid waste management services.

The governor of Lagos State, Babajide Sanwo-Olu, said his administration has spent over N2 billion on the rehabilitation of dumpsites across the state, while another N1billion is being invested in the construction of transfer loading stations to provide the necessary infrastructure for waste management.

Mr Sanwo-Olu disclosed this on Wednesday during the commissioning and handover of waste collection vehicles and double dino bins to the Lagos State Waste Management Agency (LAWMA).

The governor said his administration has invested so much in improving waste management in the state in a bid to harness job creation potentials and other environmental benefits.

“You will recall that, on assumption of office two years ago, one of the first things I did was visit the Olusosun Landfill in Ojota. This visit was not accidental. We were and still remain determined to rewrite the narrative of waste management in Lagos State, for the better.

“This determination has seen us already invest more than two billion naira towards the rehabilitation of dumpsites across our state. Another one billion naira is currently being invested in the construction of three new transfer loading stations to provide the necessary infrastructure to facilitate the effective delivery of solid waste management services, ” Mr Sanwo-Olu said. 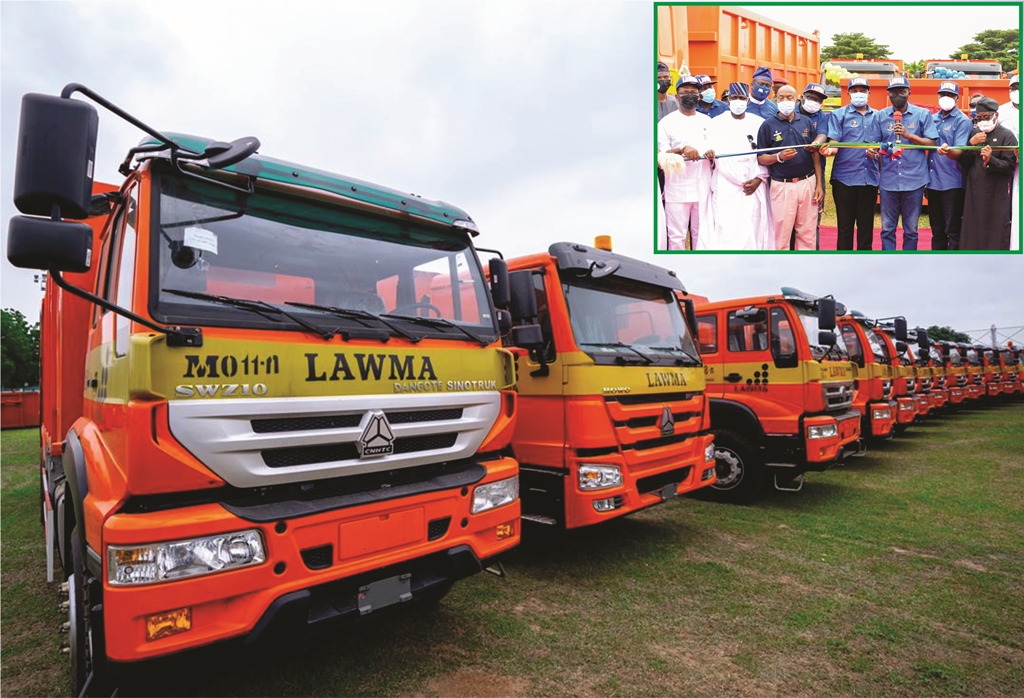 At the event on Wednesday, Mr Sanwo-Olu handed over 102 waste collection vehicles and 100 double dino bins to LAWMA to improve waste management in the state.

Mr Sanwo-Olu said environmental health is a crucial aspect of the T.H.E.M.E.S agenda of his administration and empowering LAWMA to effectively drive the elimination of waste accumulation in Lagos in important.

The governor said the new equipment donated to the LAWMA will enhance the adoption of waste recycling, create job opportunities in waste recovery, reuse, repair, remanufacturing and materials innovation.

“Additionally, we have procured 100 double dino bins. This represents one of the largest singular investments ever in the waste management sector in the State. 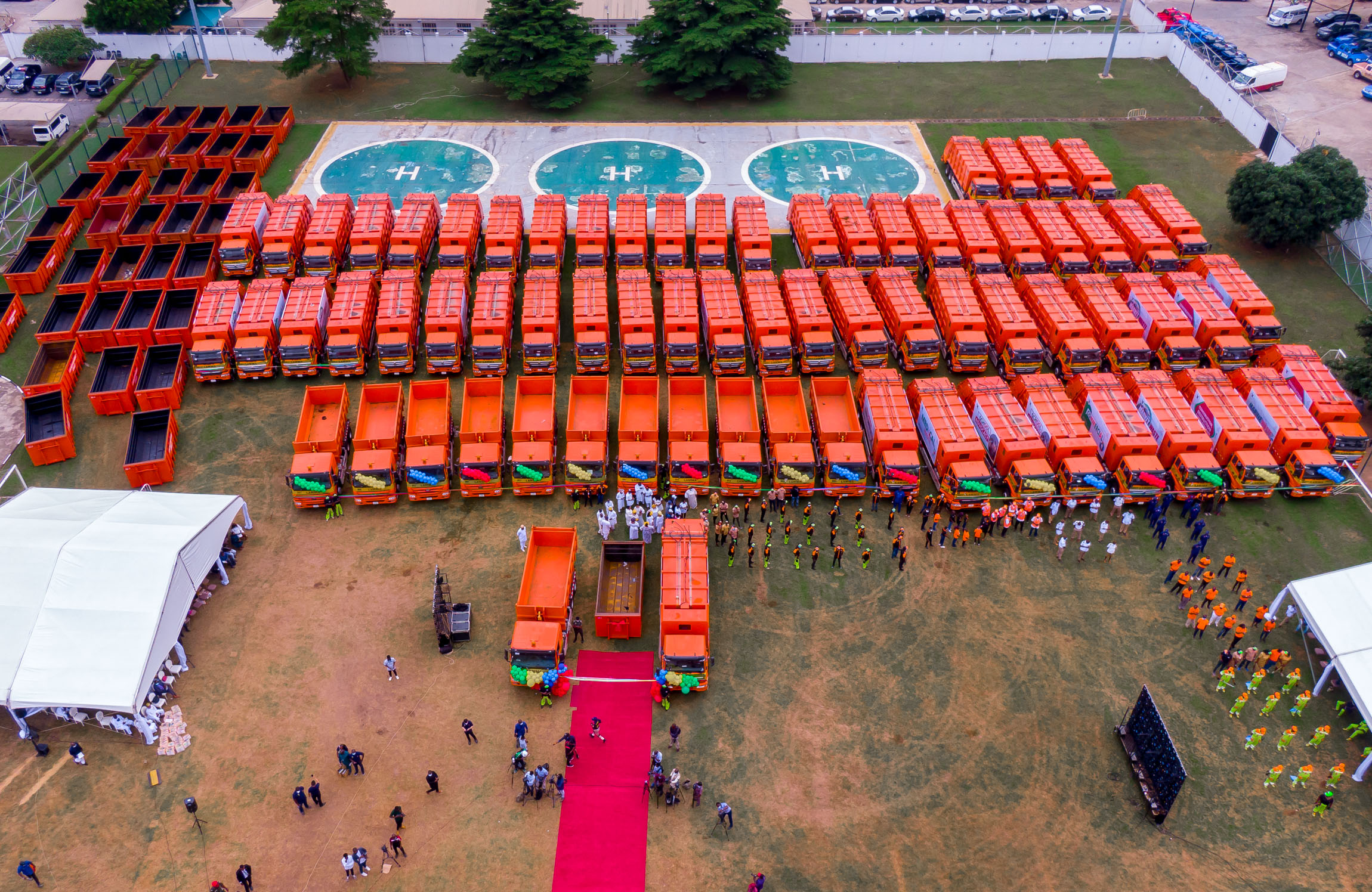 “We are confident that the addition of these new assets to our existing ones will very quickly bring about very visible improvements in waste evacuation and reduce the incidence of blackspots that blight our roads and clog our drains,” the governor said.

Mr Sanwo-Olu said his administration is thinking beyond the basics of waste collection and disposal and steps are on to “permanently change the habits and mindsets of Lagosians regarding the management of waste; inculcating a culture of responsible usage, and of sorting and recycling.

He urged LAWMA to upscale and embrace new waste management innovations to transform Lagos into a 21st century mega city. 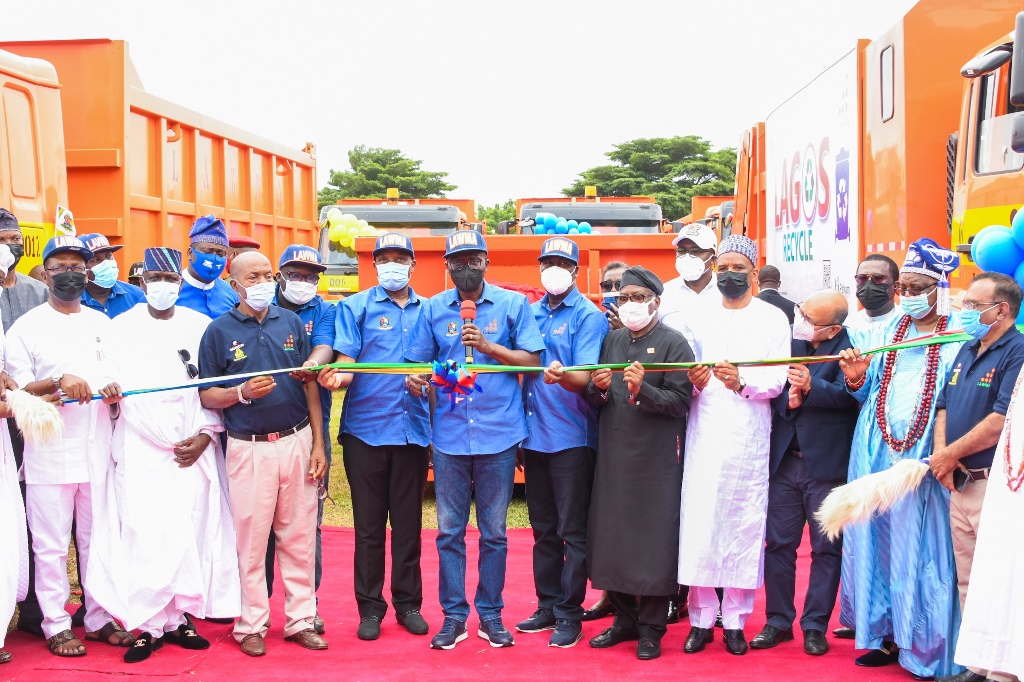 Also speaking at the commissioning of the equipment, the Managing Director of LAWMA Ibrahim Odumboni, said the agency has faced acute shortage of compactor trucks and waste management has been a challenging task in Lagos State.

“Lagos State is the fifth largest economy in Africa, with a population in excess of 20 million people. The pressure, resulting from the huge population, added to the volume of economic activities, expectedly trigger huge increases in the volume of waste generated across the state. As at today, no less than 15,000 metric tons of solid waste, is generated in the state on daily basis. This challenge necessitates, that LAWMA has an impressive truck fleet to cope effectively,” he said.

Mr Odumboni thanked the state government for the donation of equipment which he said will position LAWMA for progress and better performance. 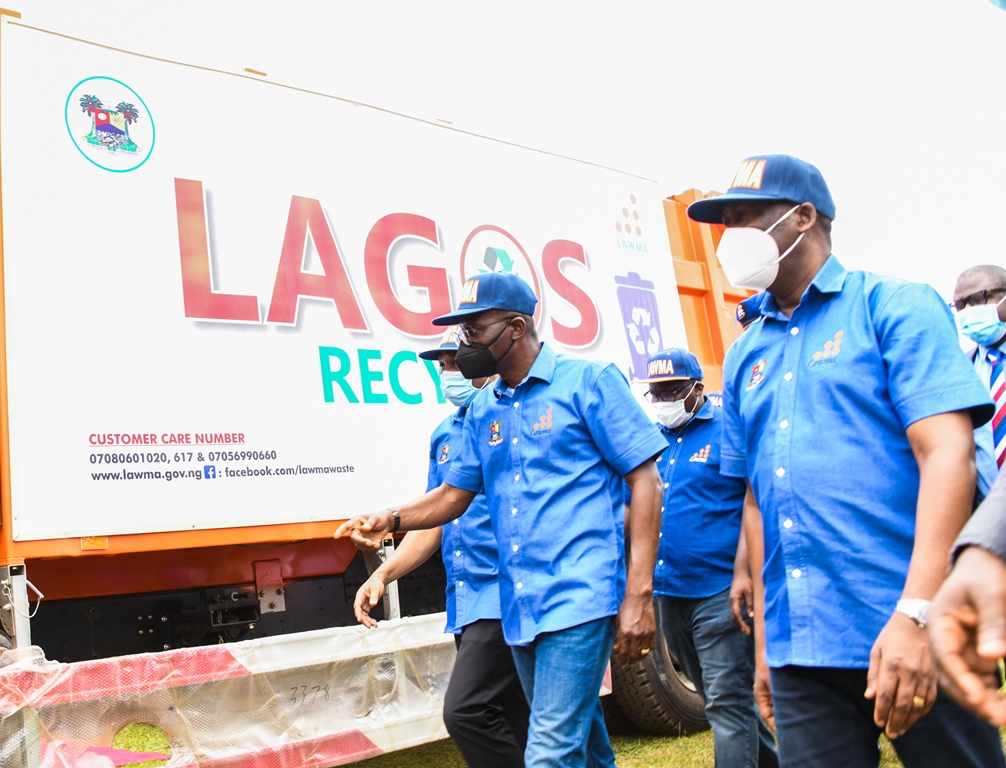 “The trucks will be distributed among LAWMA formations and operational districts, for effective coverage of the state, and for optimal performance,” he said.

The governor further urged Lagosians to take responsibility for the waste they generate, given the threats of climate change and the vulnerability of Lagos state. 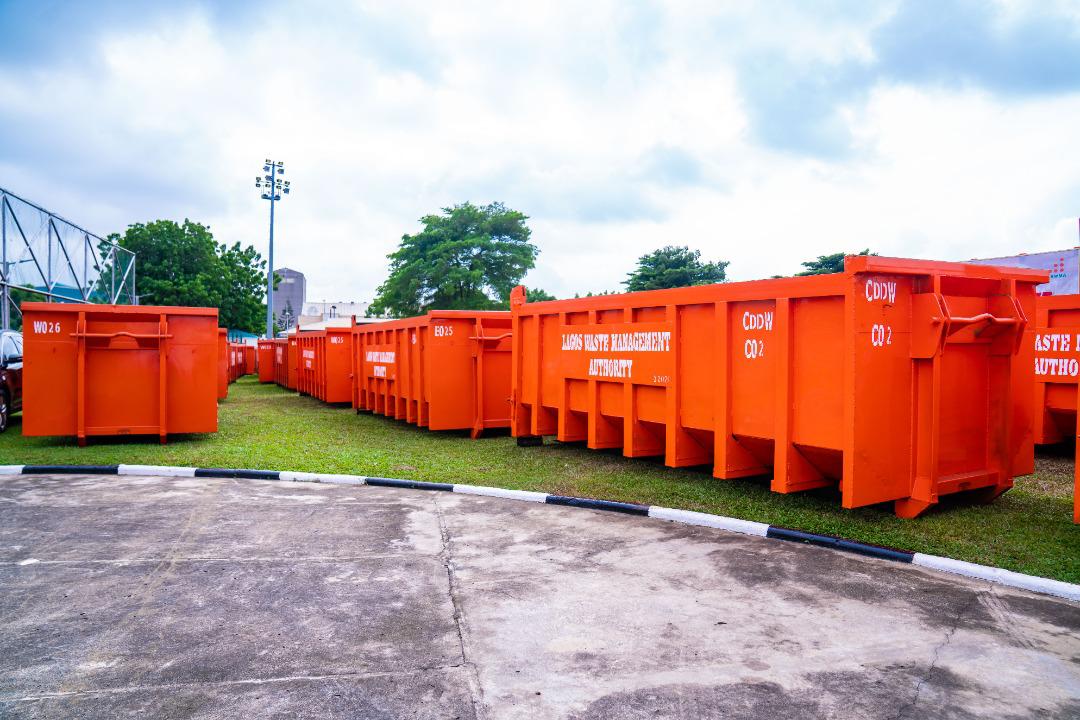 “As we are all aware, there is renewed emphasis and global focus on the threat of Climate Change. Lagos being a densely built-up low-lying coastal state is particularly vulnerable, especially to flooding.

“This calls for a wholesale change of attitude towards our environment, beginning with basic hygiene at home, proper domestic waste management and ultimately, environment-friendly practices. The quality of our environment directly impacts the quality of the lives we live,” Mr Sanwo-Olu said. 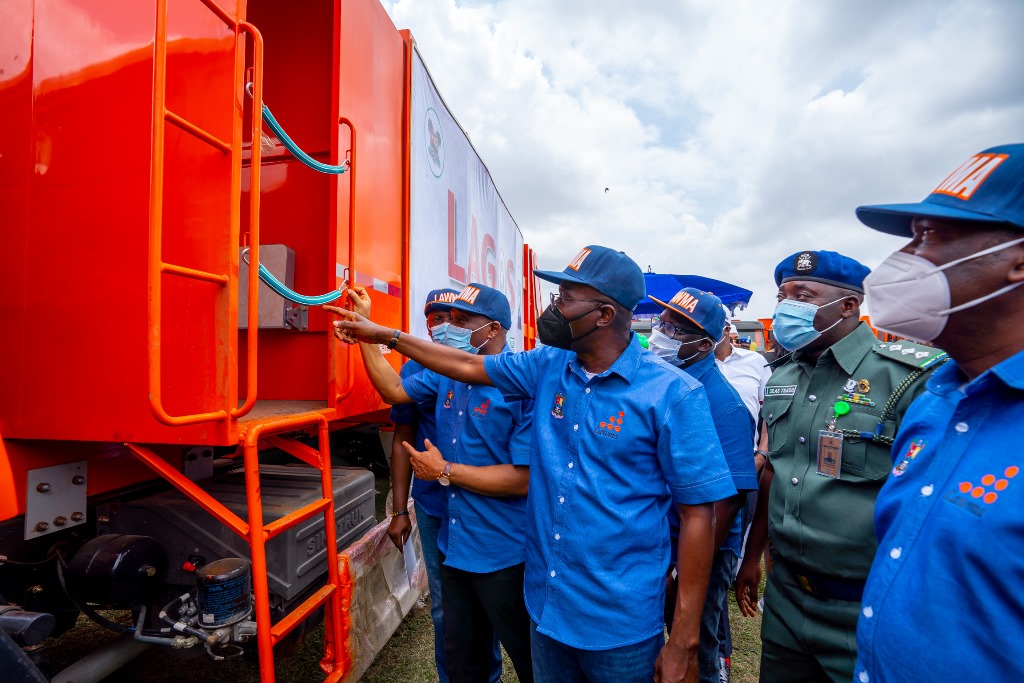 He added that his administration is aware of the potential of the waste economy and a “waste-to-wealth plan is taking shape,” with the rehabilitation of compost facility in Odogunyan and other projects.

Why I visited Tinubu in London – Sanwo-Olu