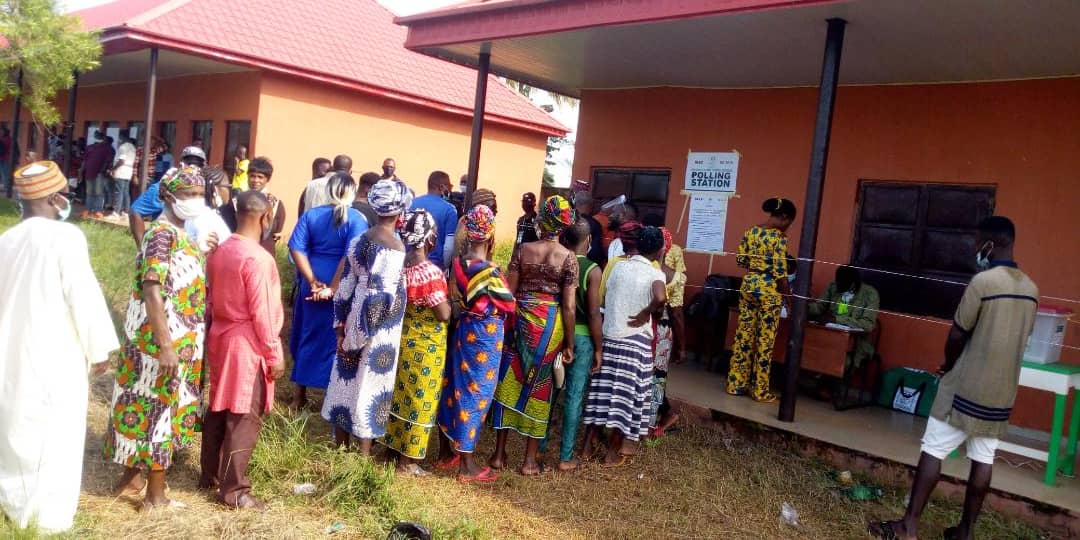 Voters at a polling unit

Opposition political parties in Ogun State have threatened to challenge the victory of the ruling All Progressives Congress (APC) in the just concluded local government election held in the state.

The Ogun State Independent Electoral Commission (OGSIEC) on Sunday declared the APC winner of the 20 local government areas of the state.

But the Action Alliance and New Nigeria People’s Party say they would head to court to seek the nullification of the elections, claiming that the process was marred with irregularities across board.

The two parties also said they have passed a vote of no confidence on OGSIEC and the entire electoral process.

Dapo Adeyemi, the State Leader and Chairman, Think Tank Committee of the Action Alliance, accused OGSIEC of excluding his party from the election results in Ifo local government.

Mr Adeyemi, in a statement on Sunday, also faulted the electoral committee for allegedly using old electoral result sheets for the election.

In a letter addressed to the Chairman of OGSIEC, Babatunde Osibodu, Mr Adeyemi demanded an explanation on how his party’s chairmanship candidate in Ifo scored zero votes in the polls.

“While I may not want to comment on the fraudulent figure awarded the APC which appointed you, is it not criminal for your Returning Officer at Ifo to discountenance the votes casted for the candidate?

“Are we sure that the Returning Officer is of sane mind? Or, do I assume that you intentionally directed that the result sheets used for previous elections where AA did not contest should be brought to Ifo Local Government.

“Worst still, the result sheets comprised 19 Parties, 12 of which had been deregistered while you distributed result sheets for the 2021 elections to other LG’s and AA was included.

“Mr. Chairman, as a Lawyer, what do you say to this? Do you think you are fair to the candidate and the party? Would this not hunt you to your grave? In any case, we shall seek legal advice on this infraction and get back to you.”

For the NNPP, the party Chairman, Olaposi Oginni, urged members of the party to remain calm in the face of provocation.

In an emergency meeting of both Ogun and Lagos NNPP leaders in Lagos on Sunday, the party spoke through its Deputy Publicity Secretary, Emmanuel Olorunmagba, enjoining party members to allow the court do its job.

“The New Nigeria Peoples Party (NNPP) appealed to its candidates and members to remain calm and exercise caution in the face of the daring provocation resulting from the manipulation of the Saturday 24th July 2021 local council election in Ogun state,” Mr Olorunmagba said.

He insisted that the NNPP won several seats in the election and that was the reason the presiding officers in several units were afraid to declare election results at the spot.

“Our analysis of the results from almost all the polling units saw our great party coming second behind APC and ahead of PDP indicating that if the APC had allowed a free contest they would have been roundly defeated.

“We saw this fraud coming due to excessive control of State Electoral Commissions (due to its enabling laws) by state government and proactively initiated a pre-election matter challenging the validity of the emergence of the APC candidates through the back door after the window for nomination had closed, while the courts are still looking at that, they decided to commit this brazen daylight rape of the very sophisticated people of Ogun state.

“We call on you to be united, put this fraud behind you and wait for the courts to do their job.

“We would also, in addition to the pre-election matter in court, proceed to the tribunal not only to challenge the Ward 11, Abeokuta North LG result which returned the NNPP candidate as Councillor-elect but the general conduct of the election and refusal of Presiding Officers to count votes and declare results publically”.

“The Ogun people spoke loudly and no doubt have exposed the unacceptability of the APC government as we head to 2023, what NNPP needed now is to consolidate on the gains of this outing which has showed us the love Ogun people have for us.

“We urge all to rally round the party leaders across all levels and re-strategise for the future while we continue with the struggle to expunge all sections of the 1999 Constitution that puts the conduct of local elections in the hands of these governors in order to make our democracy hunt you to your grave? In any case, we shall seek legal advice on this infraction and get back to you.”

Mr Osibodu did not respond to phone calls for comments.