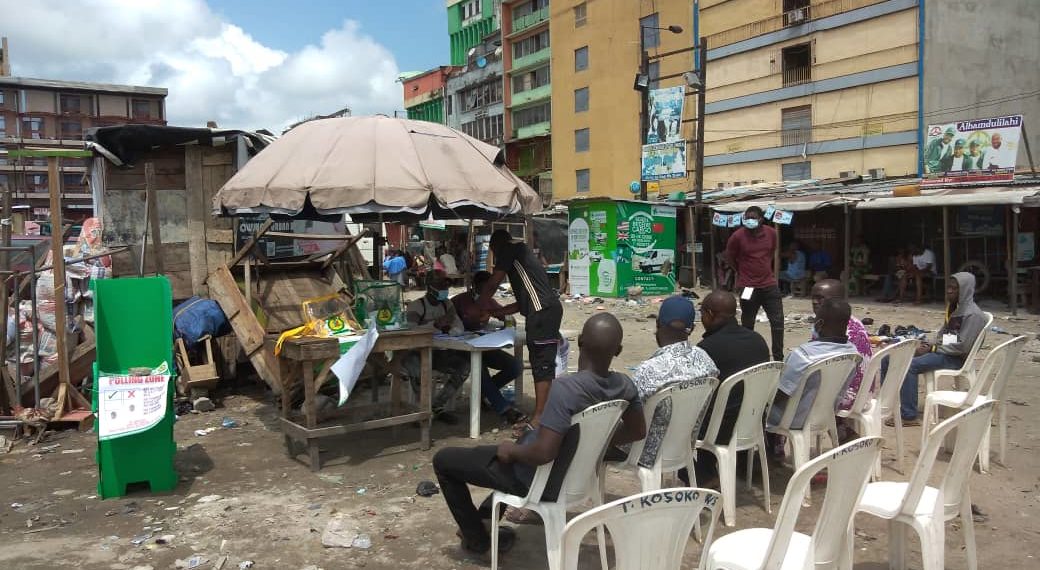 The APC defeated the PDP and other parties in the various Lagos local councils.

The ruling All Progressives Congress (APC) in Lagos State on Saturday won all the councillorship positions in the Ojokoro Local Council Development Area (LCDA).

Mr Balogun declared Obafemi Oke of the APC winner and councillor­-elect for Ward D having scored the highest number of votes. (NAN)

Candidates of the ruling All Progressives Congress (APC) on Saturday won the council polls in Badagry.
The Lagos State Independent Electoral Commission (LASIEC) declared Olusegun Onilude, the incumbent chairman of the Badagry Local Council, the winner.

LASIEC also announced that Joseph Gbenu also of the APC was re-elected the chairman of the Badagry West Local Council Development Area (LCDA).

“Olusegun Onilude of the APC having satisfied the requirements of law and scoring the highest number of votes is hereby declared the winner and returned elected having polled 8,065 votes,” Mr Odukomaiya said.

Dosu Sao, the Returning Officer for the Badagry West LCDA, declared Gbenu also of the APC the winner.

The returning officer declared Mr Gbenu the winner having satisfied the requirements of law and having scored the highest number of votes.

According to Mr Ladega, the winner scored 11,232 votes to floor the Peoples Democratic Party (PDP) candidate who scored 896 votes.

“Having complied with the requirement of the law and scored the majority votes, Surah Animashaun is hereby decleared elected and returned as Chairmof Epe Local Government,” he announced.

Ganiyu Egunjobi, the Executive Chairman, Agege Local Government Area, has been reelected as the council chairman with 6,226 votes in the just-concluded local government poll in Lagos State.
The News Agency of Nigeria (NAN) reports that Mr Egunjobi, APC’s candidate, defeated Olusola Osolana of the PDP, who got 4,114 votes.

Salami Ojo, the Returning Officer, Lagos State Independent Electoral Commission (LASIEC), said that Mr Egunjobi, having complied with the requirements of the election, had been and thus returned.

“Egunjobi of APC in the chairmanship election of Agege local government, having complied with the requirements of law and scored the majority number of votes, is hereby elected and returned,” he declared.

Mr Egunjobi, in his remarks, thanked the residents for the peaceful election and the opportunity given him to serve a second term.

Omoniyi Odufuwa, the LASIEC Local Government Collation and Returning Officer for the election, declared the result at the collation centre situated at Agboyi-Ketu LCDA Secretariat at 11 p.m. on Saturday.

Declaring the winner, Mrs Odufuwa said: “I, Odufuwa Omoniyi Adebukola, hereby declare Oladele Oshinowo of APC, the winner of the chairmanship election of Agboyi-Ketu LCDA having complied with the requirements of the law and scored the majority number of votes.

“The aforementioned is hereby elected and returned.”

According to her, the APC candidate, Mr Oshinowo, polled 26,771 votes to beat his closest rival, Oluwole Dahunsi of the Peoples Democratic Party (PDP), who got votes, 2,749 votes.

The winner and incumbent council chairman, Mr Oshinowo, told the News Agency of Nigeria (NAN) after he was declared the winner that he would further put the welfare of the people on the front burner in his second term.

“I want to thank my party leaders and the entire people of Agboyi-Ketu for reposing confidence in me. I promise not to abandon them.

“All I am assuring them is that I am ready to do more and surpass my performance in the first term of our administration. We have served in all honesty and with all sincerity,” he said.

Reacting, Ojo Yekini, the PDP party agent at the collation centre, who described politics as a game, said that his party tried its effort and but lost.

Also, Alaba Saliu, the APC party agent at the collation centre, described the party’s victory as a reward for the hard work of a committed and loyal chairman.

Mr Saliu said that the APC’s candidate had improved the local government from where he met the council four years ago.

“We all believe in him because of all he has done. No one contested the party ticket with him during the primary when he was seeking re-election.”

Also, the APC chairman in the council, Sunday Odekomaya, said: “I am glad because politics is a game of luck. Thank God He gave us the crown peacefully without any crisis.

NAN reports that APC candidates swept all the seven councillorship seats in the LCDA during the polls.