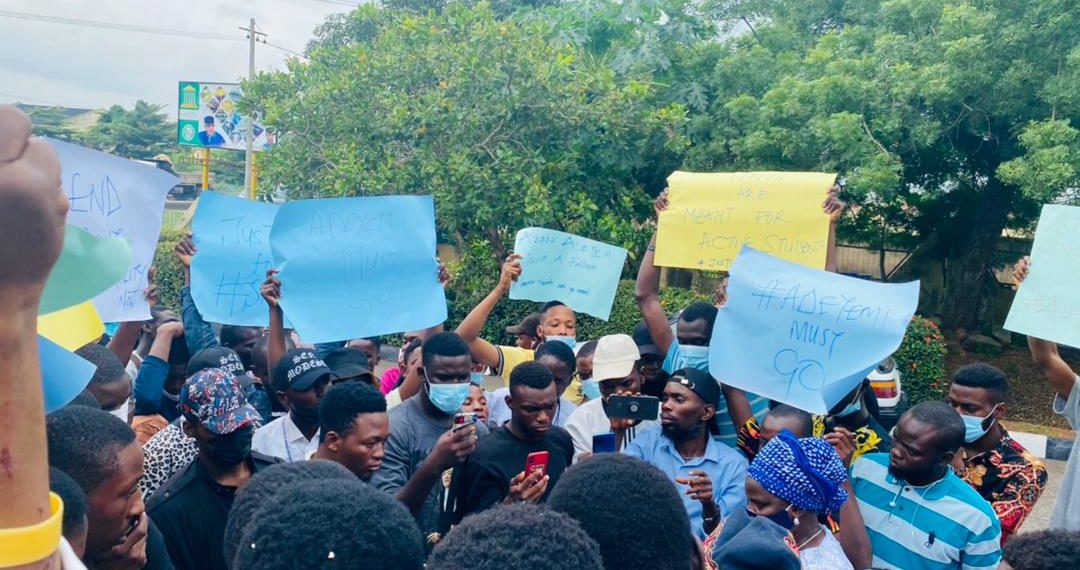 Picture of the protesting students

The students said they "need a more educated, civil, law-abiding, reputable, presentable and a level-headed fellow."

Students in Ogun State have demanded the sack of the Special Assistant to Governor Dapo Abiodun on Students Affairs, Azeez Adeyemi, over the alleged abduction of a factional chairman of the state chapter of the National Association of Nigerian Students, Adeyemi Samson.

The students, in their hundreds, made the demand during a protest to the office of the governor in Abeokuta on Friday.

A petition stating the students’ position was submitted to the state government, the state Director of the State Security Services (SSS), and the Commissioner of Police.

It was also published on social media with the hashtag #Adeyemimustgo.

A short video on social media showed Mr Samson captured, beaten to a pulp, and whisked away by some unknown men during the governor’s project inspection tour in Ago-Iwoye area of Ogun East senatorial district on Thursday.

In the petition, the students, who accused the aide of being the mastermind of the attack and subsequent kidnap of Mr Samson, called for his removal and immediate replacement.

The petition reads in part, ”We are aware that you might have not been briefed on the facts about the deeds of the Special Assistant to the Governor, Comr. Adeyemi Azeez Amoo, who is principally the mastermind of the degrading treatment meted out to the NANS OGUN JCC Chairman yesterday being one of the days of the Governor’s project inspection tour, which by event, was slated and held in Ago Iwoye where the Chairman is schooling.

“It is disheartening to state that rather than seeing to the welfare of students in Ogun State, the SA takes much pleasure in meddling in students’ politics in the state and boasting around with cultists to silence anyone who contests seats with any of his stooges. It is clear that the SA enjoys students’ politics than the office he occupies and as such must resign, immediately!

“We are much aware that one of the qualifications to the appointment of a Special Assistant includes an unassailable character and it is evident the SA is not worthy of such. We are compelled to question the reasons behind his successful appointment in the first place.”

The students said the governor’s aide had proven to take much pleasure in students’ politics rather than their welfare.
“We are afraid a prestigious position as that of a Special Assistant to the Governor of Students’ Matters should be kept in sanctity and held a clear visionary whose goals aligns with the success of the State Government’s administration and not with one that plays petty politics at the expense of a beautiful office and peaceful administration.

“AdeyemiAzeez Amoo must resign! We need a more educated, civil, law-abiding, reputable, presentable and a level-headed fellow with a brilliant mind working together and not a man of myopic vision for the State’s administration and the students.”

While responding to their request, the Director of primary and tertiary education, Waheed Olanloye, assured the students that their message would be delivered to the governor.

“Your message had been adequately gotten and same will be relayed to the Governor and be rest assured that a response will be gotten in less than 48 hours.”

Contacted, Mr Adeyemi promised to call back. He did not do as of the time of this report.