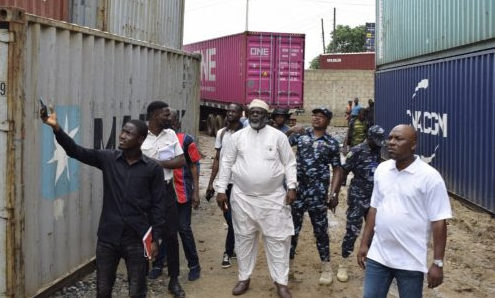 The Commissioner for Physical Planning and Urban Development, Idris Salako (middle) during sealing of an illegal container terminal on Friday in Lagos

The commissioner said the government would not allow a repeat of the Ijegun-Egba and Satelite town infractions.

The Lagos State government says it has sealed an illegal container terminal in Ibeshe in the Ikorodu axis of the state to forestall environmental degradation.

This was contained in a statement by Mukaila Sanusi, spokesman for the Lagos State Ministry of Physical Planning and Urban Development.

Mr Sanusi said the commissioner in the Ministry, Idris Salako, led the exercise to seal the unapproved terminal on Friday.

Mr Salako said the state government had to act fast to prevent further nuisance in the built environment in Ibeshe by sealing the unapproved terminal, located beside its own jetty.

He said the government would not allow a repeat of the Ijegun-Egba and Satelite town infractions where operators were responsible for the unpleasant experience with tank farms and terminals.

He decried the destructive impact of the activities of the container terminal on the environment and the newly constructed Ebute-Ibeshe road.

“It is highly unacceptable that by indiscriminately parking containerised vehicles on the road, an unapproved business activity would have so much impact on the environment and constitute danger to children in the neighborhood,” he said.

Mr Salako explained that the government had organised procedures for licensing terminals and mining activities on the shorelines which factored in the variables needed for a livable and sustainable built environment.

He urged those interested in establishing container terminals and sand mining to seek the approval of the appropriate authorities and relevant agencies of the Lagos State government.

The Commissioner enjoined community leaders and residents to maintain surveillance of their communities and report any untoward physical development.