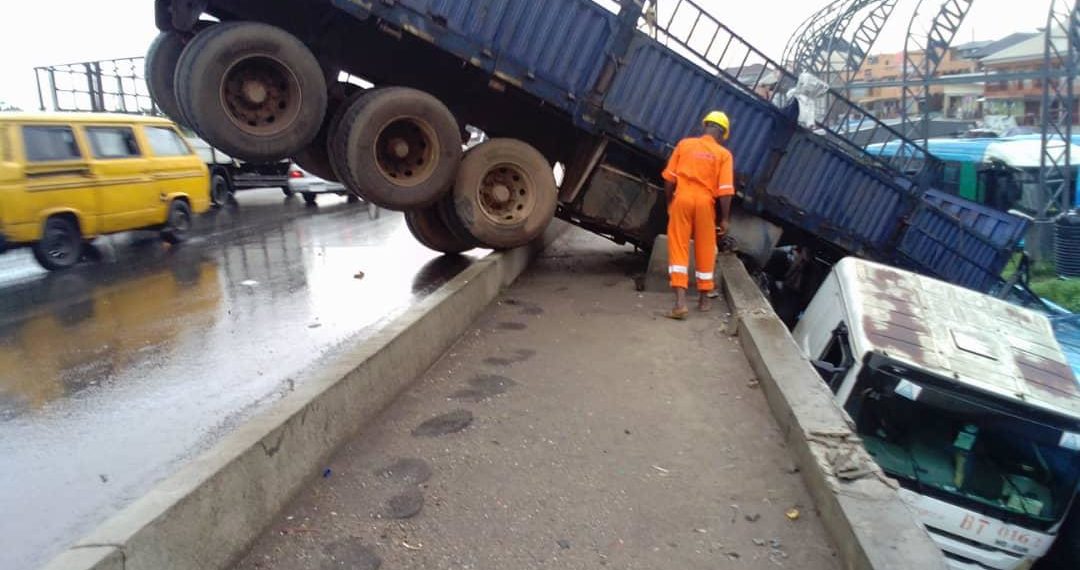 The truck, with registration number KTU 437 XU, was said to have experienced a mechanical failure and drifted from the road above the station.

An articulated truck on Sunday plunged into a Bus Rapid Transit (BRT) station at Oshodi, Lagos.

The truck, with registration number KTU 437 XU, was said to have experienced a mechanical failure and drifted from the road above the station.

Femi Oke-Osanyintolu, the director-general of the Lagos State Emergency Management Agency (LASEMA), said officials of the agency are in the process of recovering the overturned articulated truck.

“LASEMA has activated the emergency response plan in the recovery of an overturned, empty trailer that plunged into the BRT terminal from Oshodi Oke axis of the state.

“Reports have it that an overturned Trailer with registration no. KTU 437 XU had plunged into the BRT Terminal in Oshodi due to mechanical failure was causing obstruction along the axis,” Mr Oke-Osanyintolu.

Giving an update on the incident, Nosa Okunbor, the spokesperson of LASEMA, said a distress call was received on Sunday afternoon that an empty trailer plunged into the above location.

“On arrival at the scene of the incident, the LRT discovered a trailer with reg no. KTU 437 XU overturned due to mechanical fault (brake failure) while descending the bridge and fell into the BRT terminal thereby causing obstruction along the axis,” Mr Okunbor said.

No casualties were recorded in the incident and the agency is in the process of evacuating the truck off the road for free traffic flow in the axis, he added.

Student shot dead in clash with rice smugglers in Badagry