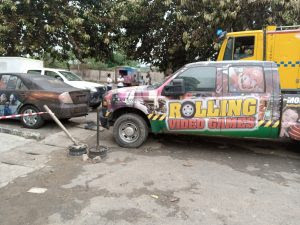 A damaged vehicle belonging to Rolling Video Games on Friday.

“I wonder why, because if there is a fire incident, I don’t know why people will now use that opportunity to try to loot offices and shops."

A businessman, Seun Peters, has lamented the looting of his office by hoodlums during Thursday’s gas explosion incident which damaged part of Ogun State Property Investment Company (OPIC) Plaza, in Ikeja.

Mr Peters, the Managing Director, Rolling Video Games, told the News Agency of Nigeria (NAN) on Friday that his company, located in the plaza, suffered several losses due to the incident.

NAN reports that five persons were killed while 11 others suffered varying degrees of injury after a Liquefied Petroleum Gas (LPG) tanker exploded in front of the plaza at about 10.30 p.m. Thursday night.

No fewer than 25 cars were also destroyed, while a part of the building was severely damaged by the explosion.

On Friday, the Lagos State government said it had begun an investigation into the incident.

Mr Peters said: “Three of my official vehicles were burnt and they tried to break into my van and my office was looted.

“I wonder why, because if there is a fire incident, I don’t know why people will now use that opportunity to try to loot offices and shops.

“I think they should stop this dangerous trend when places are burning, rather than look for a solution to it, hoodlums try to take that opportunity to loot.”

He said the office was vandalised by the hoodlums who carted away some cash, electronic gadgets, and wristwatches.

“Luckily, they didn’t take any of my documents because obviously, they are not useful to them, but the whole place is in a mess,’’ Mr Peters said.