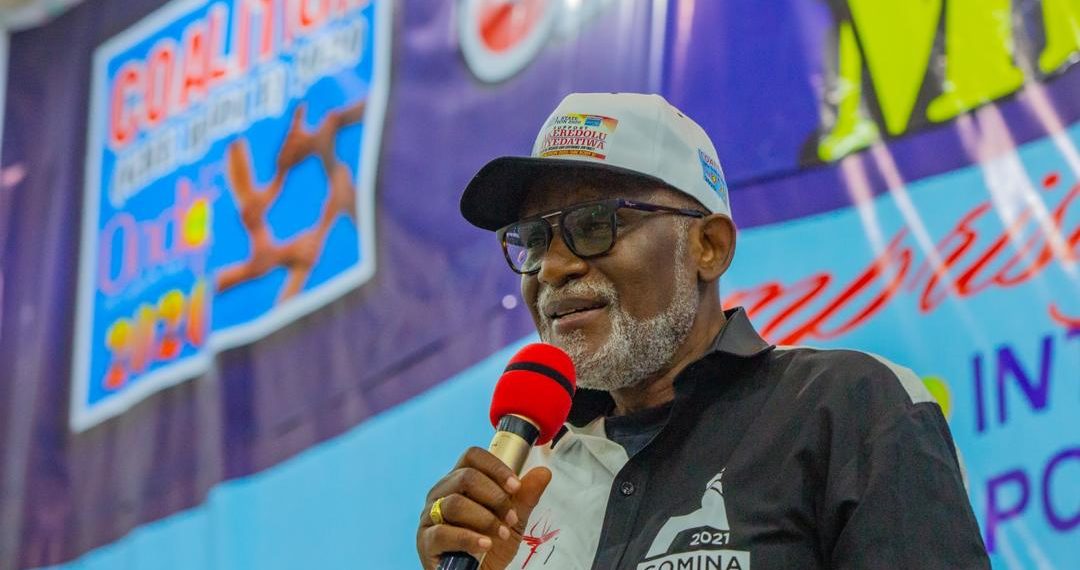 The NMA insists that the state government pays its members’ salaries in full and that it should ensure that it is regular.

Medical doctors in the service of Ondo State government, South-west Nigeria, have condemned what they described as insensitive comments made by the state’s governor, Rotimi Akeredolu, over the backlog of salaries owed the state’s workers including doctors.

The doctors, under the aegis of the state’s chapter of the Nigerian Medical Association, (NMA), in a statement issued at the weekend, said they received their February salary in June.

They insisted on receiving their full salary despite the recent statement by Mr Akeredolu, which suggested part-payment of salaries for all categories of workers in the state.

Mr Akeredolu had, in a television interview on June 3, 2021, queried what he described as the audacity of the doctors in the state to insist on full payment of their salaries.

He said other workers had agreed to receive part-payment of their salaries pending when the finances of the state would improve and the full salary payment would be restored.

In a short clip of the video of the interview obtained by PREMIUM TIMES, the governor said the doctors were not better than teachers, civil servants and other categories of workers, whom he said have agreed to receive partial payments.

He said; “I think the doctors are not even in the country. How will they say others can receive such a salary but they cannot. Do they have two heads?

“They would say their children are in school as if children of the teachers are not in school. I think they need to be talked to by well meaning people of the state.”

The doctors’ association in a statement signed by its president and secretary, Stella Adegbehingbe and Olorunfemi Owa respectively, said the governor’s statement was disparaging and dehumanising to the medical profession.

The statement reads in part; “The immediate need for this press release was precipitated by Mr. Governor’s outburst seeking to know whether “Doctors have two heads to be asking that they be paid their 100% salary. It is rather unfortunate that Mr. Governor, who was voted for, is outraged that we had the audacity to request our dues from his administration. He is apparently of the view that since he sporadically pays less than 100% of monthly salaries to other workers, we should meekly accept less than 100 of our hard-earned salaries from his administration.

him to ensure that he meets contractual obligations freely entered by the state government. Regrettably, Mr. Governor elected to irritably disregard basic obligations of government to her citizens. He has chosen to blame victims of government’s indebtedness for the inability of the same government to perform its duties. His government demands that her workers should work on credit, while gratefully accepting less than their due wages, along with insults, packaged as an admonition.”

The NMA insists that the state government pays its members’ salaries in full and that it should ensure that it is regular.

The union said Ondo State government pays a percentage of salaries of its workforce, as reportedly agreed with the state by the Joint Negotiating Council, comprising representatives of government and the Nigerian Labour Congress.

This, according to the statement, is not peculiar to healthcare workers in the state as teachers had been getting percentage payment of salaries for as far back as nine months.

PREMIUM TIMES understands that the policy has been in place since the coronavirus pandemic hit Nigeria.

However, NMA said it did not agree with the decision and asked for a 100 per cent payment of salaries for its members.

According to the association, some doctors have begun to resign their appointment over salary cuts and a backlog of unpaid wages.

They said the situation has led to a chronic shortage of manpower “with crushing overwork for those on the ground who are working on credit.”

The association noted that following mass resignation among the University of Medical Science Teaching Hospital staff in the state, the institution was about to lose some of its accredited programmes.

“This fact of indebtedness and avoidable delay in payment of salaries, should ordinarily attract a different approach from a responsive government,” it said.

The association lamented that all efforts it had made to meet the governor had been futile.

It also said general hospitals in the state are left with two doctors each.

“This makes it practically impossible for the hospital to function at a minimum acceptable level,” it said

Meanwhile, this newspaper’s efforts to get the reaction of the state government on the development were unsuccessful.

Calls to the the telephone line of the chief press secretary to Mr Akeredolu, Olaode Richard, were unanswered, and messages sent to the line were also not replied as of the time of filing this report.

The telephone line of the state’s commissioner for information, Donald Ojogo, was not available on Sunday afternoon when our reporter called.

However, a member of the state’s cabinet who does not want to be quoted, said the government was not prepared to exchange words with the doctors.

The source, who said his identity should be protected because he was not authorised to speak on the matter, said; “There is absolutely nothing to react to because we cannot be going back and forth with the doctors.

“The governor has spoken and that is it.”

General Muhammadu Buhari: Your Time Is Up!, By Rinu Oduala