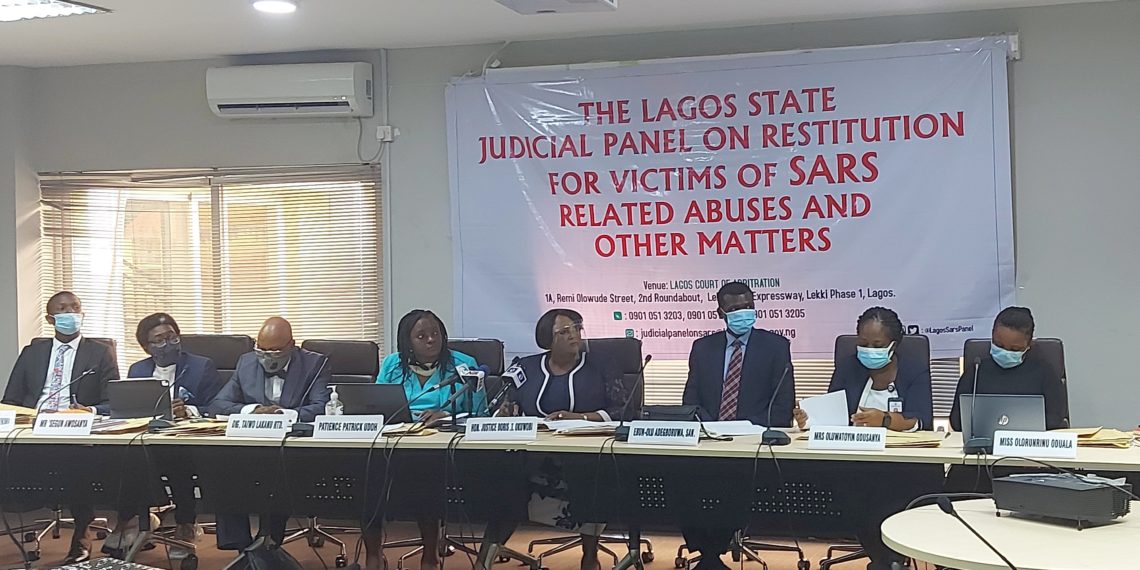 A total number of 235 petitions were received by the panel between October to December 2020.

On October 19, 2020, the Lagos state government set up a nine-man Judicial Panel of Inquiry to investigate cases of brutality and human rights violations perpetrated by operatives of the Nigerian Police Force and the dissolved Special Anti-Robbery Squad (SARS).

The panel was set up as a response to one of the demands of youth during the #EndSARS protests, which is investigating cases of police brutality and providing restitution to the victims.

While inaugurating the panel, the Lagos state governor, Babajide Sanwo-Olu, said it was “in line with the resolution of the National Economic Council on October 15, 2020, chaired by the Vice President, Prof Yemi Osinbajo.”

The governor added that the panel was set up based on Section 5 of Tribunals of Inquiry Law of Lagos State (2015) which gives the panel the powers to procure evidence and summon any person to attend its proceedings to give evidence.

The state government, however, expanded the locus of the Judicial Panel on October 21 to include the investigation of the October 20, 2020, Lekki Toll shooting incident.

Saddled with the responsibility of providing restitution to the victims of police abuses in the state, a N200 million fund was approved by the Lagos state government as compensation for victims.

The panel was given a six-month timeline to accomplish its tasks, from October 2020 till April 2021.

The panel so far

The judicial panel commenced sitting on October 26, 2020, but heard its first case on October 27, with over 100 cases heard by the panel as of April.

Although similar panels were set up in different states of Nigeria, the Lagos panel received the highest number of petitions.

A total number of 235 petitions were received by the panel between October and December 2020. Out of this number, about 112 cases have been brought up before the panel. This includes cases that have been struck out, those undergoing hearing, and those that have received judgments.

Out of the 112 cases brought before the panel, 10 were struck out for want of diligent prosecution while four cases were withdrawn by the petitioners. Numerous cases are still ongoing at the panel.

A total number of seven cases have received compensation at the panel, totaling N43.75 million. The compensation and judgment were awarded between February and March.

PREMIUM TIMES reported how N10 million each was awarded to three petitioners namely Adebayo Abayomi, Hannah Olugbodi, and Tolulope Openiyi. While Mr Abayomi and Mrs Openiyi were compensated for the extrajudicial killings of their loved ones, Mrs Olugbodi was compensated for being shot by an officer resulting in damage to her leg.

Another petitioner, Chidebere Nwadi was awarded N7.5 million for spending six years in jail without any offence, while Felicia Opara and Tella Adesanya were awarded N750, 000 and N500, 000 respectively for the harassment, unlawful detention, and brutality they suffered in the hands of the police.

The last petitioner, Blessing Omorogie, was awarded N5 million as compensation for a deformity on her face after being shot by an officer.

In the case of Francis Idum, who was allegedly killed by a bullet shot by police officers in Ilupeju, and Oladoyin Ademola who said he suffered cataracts after being slapped by a police officer, the panel awarded no compensation, saying they could not establish their case.

Also, 12 other cases have been concluded and await the ruling of the panel.

Cases yet to be heard

“We got an extension, but only for a short period, all these adjournments will no more be allowed,” the retired judge announced while hearing a petition.

With the extension, the panel now has till July 19 to hear all the cases before it, as opposed to the earlier finishing date which was April 19.

With more than half of the petitions not heard six months after the commencement of the panel, PREMIUM TIMES considers the feasibility of finishing all the petitions in the next three months.

Observers are pitched in different tents regarding the pace of the panel, with some saying too many adjournments are allowed, with no consideration to the limited time that the panel has.

Although the panel chair, Mrs Okuwobi, often frowns at adjournments sought by the police respondent or at the expense of the petitioner, some adjournments are allowed at the panel for the purpose of fair hearing.

Analysts, lawyers, and human rights activists interviewed by PREMIUM TIMES before the extension said more time should be given to the panel.

“It will be a grave injustice to discontinue with pending petitions on the basis of time. If the panel feels they cannot conclude the petitions within the time, they should formally ask for an extension from the governor,” he said.

The Tribunals of Inquiry Law of Lagos state gives the governor the power to set up a tribunal to look into disputes and matters pertaining to public welfare. The also has the power to allocate a timeframe for the tribunal and give an extension when needed.

With the additional three months given to the panel, can all 123 fresh cases be attended to, alongside over 50 of already-opened cases that are not yet near closure?

A lawyer, who prefers not to be named because he appears before the panel, said the pace at which the panel continues with the petition will determine whether it will conclude the cases.

“Justice takes time, imagine the panel spending six months on barely 100 petitions and you expect the same panel to round off the remaining 130 or more cases in three months, does that sound possible?” the lawyer responded.

“This is not to pre-empt the panel but from the place of logic, it does not look possible,” he added.

A journalist who has been covering the panel since inception, Fola Ademosu, said the three months extension given to the panel to probe the October 20, 2020 shootings at Lekki tollgate and scores of human rights by the police is “crassly insufficient”.

“It is a matter of logic, it has taken the panel six months to hear about 100 petitions, some of which it has yet to conclude, it definitely means it requires as much time as the initial one or more to finish the over 120 petitions left to be attended to,” he said.

Mr Ademosu said even in the regular courts, cases do not move with the speed of light and tend to suffer adjournments for different reasons.

“How then does the government expect the panel, a quasi-court in its own right, to hear and conclude about 250 petitions in nine months?

“The extended period is defeatist of the panel’s goals. It cannot be in the interest of justice to victims. It portrays the government as being in haste to put the panel and all of the issues that prompted its birth behind it,” he added.

Another journalist, who prefers not to be named, said the frequent adjournments at the panel, mostly on the account of the respondents, will be a hindering block to the completion of the petitions within the time left.

“If the panel continues to grant adjournments and accommodate unnecessary discussions at this rate, I don’t see them finishing the petitions in two years, talkless of nine months,” she said.

Shina Loremikan, a foundation member of the Committee for Defence of Human Rights (CDHR), said the most important thing is to see that “justice flows like river waters.”

“If that is to be done, if there is a need for more extension, it is good for them to seek an extension. All parties need to explain they played in the alleged rights abuses and if you don’t know the depth of the abuses, you cannot pick for justice.

Mr Loremikan said the chances to finish within the period of time given are slim and to know the extent of police brutality and abuse of powers, patience is required from all quarters.

Alex Omotehinse, president, Centre for Human and Socioeconomic Rights (CHSR) said the panel has been fair to parties so far and the government needs to aid the delivery of justice.

“The best the government can do in the interest of justice is to give all the support that the panel needs. They have been doing well and should not be stifled,” he said.

Nigeria: Does the Africom Invitation Align With U.S. Interests?, By Cheta Nwanze