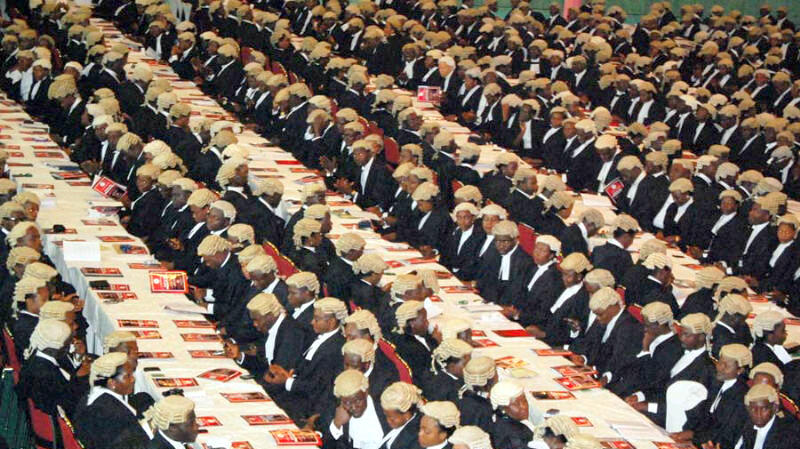 “I believe if one or two of them are made to face the disciplinary committee, they will sit up."

The Nigerian Bar Association (NBA) in Lagos on Monday expressed displeasure at the popular act dubbed `charge and bail’ as practised by some lawyers.

The Chairmen of the five branches in Lagos spoke with the News Agency of Nigeria (NAN) in reaction to reported cases of lawyers fighting over legal representation of defendants in court.

They also described the act as “infamous” conducts.

According to them, the Rules of Professional Conduct (RPC) is a collection of rules specially drafted for Nigerian legal practitioners to help check and guard against unethical standards capable of demeaning the profession.

Speaking with NAN, Chair of Lagos branch of the NBA, Yemi Akangbe, described the legal profession as noble, with lawyers as upholders and protectors of the law.

He said the sanctity of the legal profession is protected by the Rules of Professional Conduct (RPC) 2007, and any person who thinks a legal practitioner is in breach of the rules, can make an application to the Legal Practitioners Disciplinary Committee (LPDC).

“One of the recent flagrant abuses of the rules is the infamous conduct of a legal practitioner which occurred in the court’s premises, when two lawyers attempted to offer their complementary cards to a client, which led to a scuffle between the lawyers.

“The above conduct is in breach of some provisions of the RPC; the act of fighting over representation in court is a clear violation of this rule,” he said.

While noting that the RPC also provides for a coexistence and mutual respect among lawyers, he urged lawyers , as stakeholders in the legal profession, to protect the sanctity of their discipline.

“Similarly, the NBA has a duty to sensitise lawyers on the importance of upholding the dignity of the profession,” he said.

Similarly, Chairperson of Ikeja branch of the NBA, Barth Aguegbodo, also condemned the act of ambulance chasing, describing it as a “prima facie case of conducts unbecoming of a legal practitioner”.

According to him, the RPC makes elaborate provisions as to how such infractions can be handled, adding that at the branch levels, a petition can be initiated against such lawyers, to the LPDC.

He said where investigations reveal that the RPC has been breached by such lawyers, then a proper disciplinary trial is initiated.

“On the part of branches of the NBA, a taskforce or committee is usually put in place to sensitise members as to the content and operation of the RPC,” he said.

He said that to avoid the denigrating picture created by such lawyers, some NBA branches have developed programmes aimed at addressing same and also mentoring lawyers.

On his part, Chair of NBA Ikorodu, Abimbola Ojedokun, described `charge and bail’ practice by lawyers as an unfortunate situation.

Mr Ojedokun cited the recently reported case of two female lawyers who had fought at an Ojo magistrates’ court over representation of suspects to further buttress his point.

“It is unethical for a lawyer to fight over clients anywhere, not to talk of fighting in the court premises; clients of any lawyer who is ‘worth his salt’ comes to brief him in his chambers,” he said.

“Section 1 of the RPC requires every lawyer to maintain a high standard of professional conduct, every lawyer has a duty to report any breach of the rules to the appropriate authorities for sanctions.

“The disciplinary committee and the supreme court have the power to impose penalties like striking off the name of lawyers found guilty off the roll, suspend such lawyer or admonish such lawyer,” he said.

He urged the NBA to be “alive” to its responsibility of protecting the RPC, by ensuring an enforcement of the rules, and prosecution of any erring lawyer.

Contributing, Chair of the NBA Badagry branch, Mohammed Sodipo, also condemned such unprofessional conducts by lawyers, describing same as dirty, debasing and belittling of a lawyer.

“It is an age long practice such that the public has now formed an opinion about those who indulge in this practice as ‘charge and bail lawyers.’

“I remembered as a young lawyer some years ago, some colleagues will go to Ojo police station directly opposite Ojo magistrates’ court and be fighting and scrambling over suspects in the police cell,” he said.

According to him, lawyers who engage in such obnoxious acts are not “bar men” as they obviously never participate in NBA activities such that the NBA will call them to order.

He urged the NBA to partner with the courts, to identify and fish out such erring lawyers for sanctions, to forestall future occurrences.

He said the NBA can also invite such lawyers failing which their cases can be forwarded to the LPDC for disciplinary measures.

“I believe if one or two of them are made to face the disciplinary committee, they will sit up,” he said.

In his opinion, Chair of Epe Branch, Ademola Koko, while condemning the unethical acts of “brief chasing” by lawyers, said that such lawyers required mentorship.

Mr Koko said that although such practices of charge and bail, abound in the legal practice, it should not be generalised.

He observed that a major reason for such practices stems from a general prevalence of poverty in society, adding that greed and refusal by young lawyers to be mentored, are also root causes.

According to him, at the Epe branch, measures are being put in place to assist lawyers in developing themselves on the profession, adding that all branches can replicate same.

“We need to assist the younger ones, and as senior lawyers, we must show good examples,” he said. (NAN)