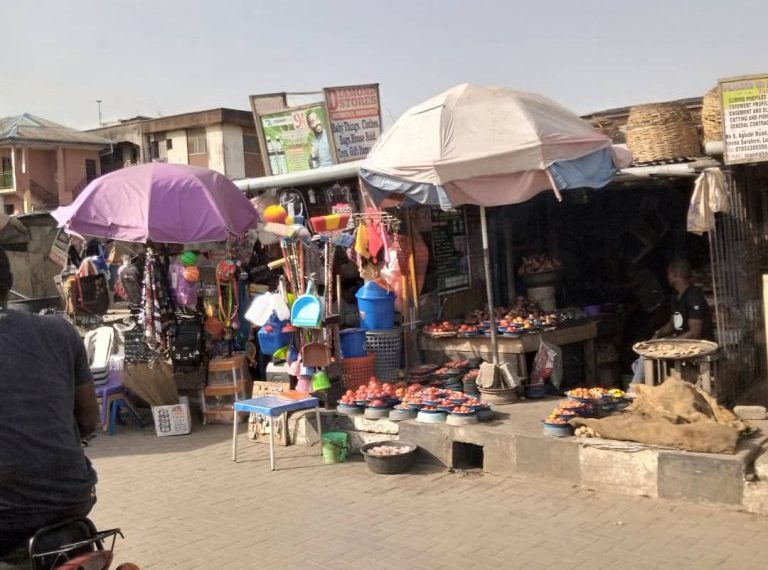 "The shop owners are asking for N50,000 per month. I cannot afford the amount and I must feed my family.”

Traders, commercial bus drivers, tricycles and motorcycle operators have taken over walkways and pavements in most parts of Lagos, denying pedestrians free movement along the city’s busy roads, an investigation by the News Agency of Nigeria (NAN) has revealed.

The walkways are passages or paths constructed for pedestrians. To ensure safety, they are often raised above the ground.

Commercial vehicle operators were not left out in the illegal activities as they occupied massive spaces with vehicles illegally parked on the walkways, negating the original purpose of the facilities.

NAN also observed that illegal structures and makeshift shops had been erected on some of the walkways, road medians and drainage alignments.

Of utmost concern, the correspondents observed, was the traders’ lack of regard for users of walkways when approached for space to walk through.

Some residents of Badagry Local Government, who spoke to NAN, condemned the arbitrary display of wares on walkways by traders at Agbalata international Market Badagry.

They said the situation usually results in accidents in the market, calling on the officials responsible for its day-to-day affairs to act quickly and deal with the situation.

Folashade Avoseh, a resident of Imeke in Badagry, said the display of goods on the walkway had resulted in gridlock in the market.

“Coming to Agbalata market to buy goods has become a nightmare for us because there is no space for one to walk. Petty traders like fish, vegetables, meat and tomatoes sellers have occupied the walkway, forcing pedestrians to walk on the road.

“The situation becomes even worse when commercial motorcycle riders, popularly known as `Okada’, block the entrance to the market, making buyers wait endlessly,” she said.

Samson Apata, supervisor, Environment & Tourism, in Badagry Local Government, told NAN that the issue of traders abusing the walkways in the market was not a good thing and must be totally discouraged.

Also, Bukola Bamgbose, a resident of Vrekete, Badagry, regretted that the market did not have a garage for vehicles.

“The market has no parking space for vehicles; it means that the vehicles can stop anywhere which makes the whole place look disorganised,” she said.

Mr Bamgbose called on the chairperson of the council to reorganise the market and create sections for different traders to display their wares.

Idowu Jimoh, a community leader, who is a regular customer at the market, said due to arbitrary display of goods on the walkway, many people were prone to accidents.

“Movement along the market is cumbersome; it is always difficult to gain access to the main market and there is no day ‘Okada’ will not hit someone,” he said.

Fatimo Sewedo, a fish seller at the market, said she was using the walkway because there was nowhere to display her goods.

“We all had our shops at the heart of the market until the officials of the council decided to build a new structure in the market.

“They destroyed the existing structure that we were using and built another structure. Unfortunately for us, we don’t have enough money to pay for the new structure.

“People that had the money paid, but we that could not afford it decided to use the walkway here. The council officials who issue us tickets come around daily to collect money from us here,” she said.

At Orile bus stop, a 30-year-old trader of alcoholic drinks, Adenike Adeoti, told NAN that she decided to use the walkway because she could not afford the cost of renting a shop.

“My use of the walkway is just for a short period because I am not happy selling there. I just need to make ends meet until I am able to afford money to rent a shop.

“We pay N50 to N100 daily to area boys, they call it `council money’; we also pay environmental sanitation money and we pay N1,000 monthly for rent.”

Another trader, Omowunmi Jamiu, 30, who sells foot wears at the same place said: “I know that this is not a proper market place, but we make great sales here which is why most of us are still here.

“We pay money to some people on a daily basis and they give us instruction to leave here once we notice officials of state government around.”

Ade Adeyemi, a 40-year-old trader, who also displayed his wares on the walkway, said: “I don’t think we are disturbing anyone. We are not stopping anyone from passing. If anyone complains about the way we display our goods, we will make necessary adjustments.”

At the popular Idumota market in Lagos Island, a trader, who simply identified herself as Felicia, said she had to display her wares on the walkway because of the high cost of renting shops.

Another trader, who sells fruits, said she records massive sales on the walkway as passersby would buy from her instead of going into the market.

“I don’t sell for free here; we pay 500 per day to some individuals who call themselves landowners, and it amounts to N3,000 per week.

“We pay daily before displaying our goods; the cost of the shop is too much for me and I cannot afford it.”
In Ikorodu, a fish seller, Ganiat Abdulsalam, said the government does not take into consideration the petty traders when constructing shops, alleging that what they do was to construct shops with a short term payback or outright sales.

“You don’t expect someone like me, who sells smoked fish to make daily income to feed my family, to think of getting a shop anywhere.

“My type of business does not even permit me for that because I have to consider so many variables before I can place prices on my commodities.

“What is important in business is the turnaround and you can only get it done where there is a concentration of movement, passersby, and traffic.

“Government-owned shops like Sabo markets are often closed between 6 p.m. to 7 p.m; here, on the walkway, you can sell until your products are finished irrespective of the time,” she said.

Worried by the worsening congestion and rising number of traffic accidents, some community leaders have warned traders, commercial tricycle and motorcycle operators against trading and operating on the walkways.

Olayinka George, the Baale of Karaole in the New Oko-Oba area of Lagos, told NAN that the activities of the traders and commercial motorcyclists around the Abule Egba area posed a lot of challenge to motorists.

Mr George, who is also the secretary, Council of Baale, Ojokoro Local Council Development Area (LCDA), said the Council of Baale in the LCDA had tasked the Community Development Committee (CDC) and the CDAs to warn traders and others against the commercial activities.

“Walkways should be free; we have discussed this several times with the council of the chiefs. We have told each community leader to warn residents against trading on the walkways.

“We urge local and state government to come to our rescue by clearing the walkways so as to allow the free flow of traffic within the area.

Bolaji Laja, the CDC chair, Apapa Local Government, told NAN that the community had sent a petition to the state government, appealing that it comes to its rescue by stopping the commercial activities on walkways in the Waterside area of Apapa community.

Mr Laja said the local government could not handle the traders as all efforts to curb the commercial activities on the walkways in the area had not yielded positive result.

At the Epe area, some residents urged the Lagos state government to intervene toward curbing the abuse of walkways, especially the market areas.

They also complained about the illegal parking of vehicles and the illicit act of traders displaying several kinds of wares and items on the walkway.

The road users called on the local government authority to do the needful by relocating the illegal walkway traders to the right locations.

Tayo Adekunle, a resident of Aiyetoro in Epe, said the array of both food items and others on the walkway had resulted in traffic gridlock in the neighborhood.

“We hardly get access to our homes due to illegal display of several items on the walkway and even on the main road.

“Petty traders like foodstuff, fish, meat and cassava flour sellers have occupied the street, making it difficult for pedestrians to walk,” he said.

Tosin Ajagbe, a resident of Eredo in Epe Division, said that the market had a car park but the motorists do not make use of it, opting to park on the walkways instead.

“To worsen matters, beggars have taken over some of the walkways; hardly does one find a space to walk,’’ she lamented.

Abolore Ademago, supervisor of Environment in Eredo Local Council Development Area in Epe Division has, however, told NAN that the council had set up a task force to kick out trading on walkways. (NAN)

Jagajaga Reloaded: Why Keyamo is in pains – Eedris Abdulkareem

The Academic Staff Union of Universities (ASUU): the Price of Success, By Toyin Falola