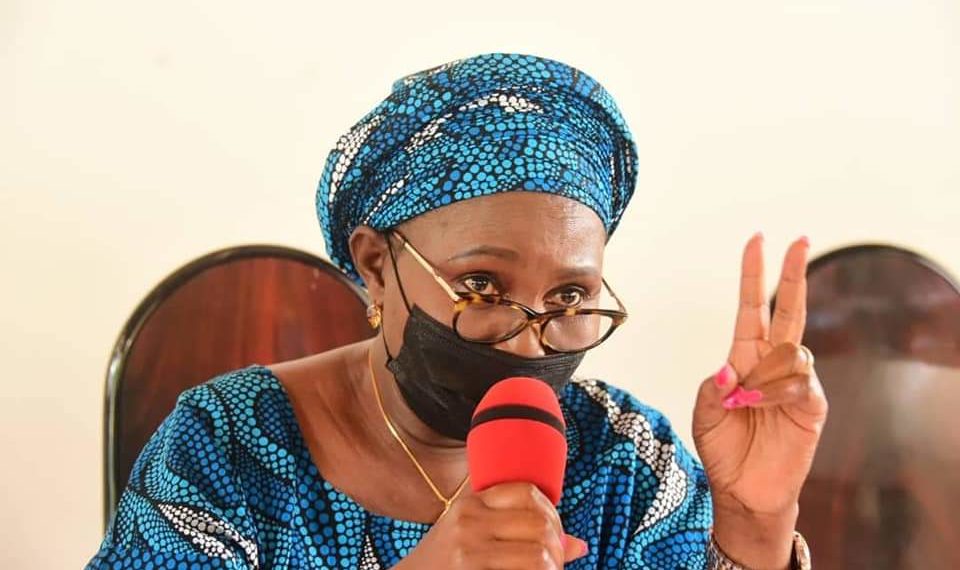 The money was given to the victims on behalf of the Nigerian Governors’ Wives Against Gender-Based Violence.

The wife of the Ondo State governor, Betty Anyanwu-Akeredolu, on Friday presented a cheque of N100,000 each to two rape victims in the state.

Mrs Anyanwu-Akeredolu gave the cheques during a meeting of the Foundation for Wives of Ondo State Officials (FOWOSO) at the Government House in Akure.

The News Agency of Nigeria (NAN) reports that FOWOSO was conceived by the wife of the governor to reach out to women in the state in form of socio-economic empowerment.

The wife of the governor said the money, which was being given to the victims on behalf of the Nigerian Governors’ Wives Against Gender-Based Violence, was facilitated by FOWOSO.

Mrs Anyanwu-Akeredolu, who is also the Chairperson of FOWOSO, and a key member of the governors’ wives’ forum, said that helping rape victims could not be over-emphasised.

“Advocacy is good, it is more of talk, but you find out that you need to support these victims financially because, most times, they are in need.

“That is why we thought it fit that, this time around, we have to support them financially.

“It could be for them to learn a trade or do buying and selling, and even for upkeep because most times, these individuals are from poor homes and don’t even have money to eat.

“No matter how small it is, it is something; we believe that as time goes on, we will be able to do more.

She said that some victims of rape might desire to continue education.

“Again, some of them could express (the) desire to continue their education, like one of the victims we are supporting here.

“She wants to go to university, and FOWOSO has taken up that challenge to ensure that her educational aspirations are realised.

“We will definitely do more,” she said.

Earlier, the wife of the governor tasked FOWOSO members to deny themselves some things in order to transform other people’s lives.

She urged the women to explore more areas where they could invest.

According to her, FOWOSO is an empowerment programme for women and children.

She said the association would do more in the next four years, adding that the women should be proud of themselves for embracing the vision and keeping it alive.

She also asked the women to commend the state governor for appointing a woman, Oladunni Odu, as the first female Secretary to State Government.

Mrs Anyanwu-Akeredolu, who lauded wives of local council chairmen in the state for support in the ‘Solayo’ kits distribution, urged them to see themselves as sources of change

“Identify a problem and come out with ideas on how lives can be better in your localities. I want you to initiate projects on how problems can be solved.

“Well-meaning individuals can help when you have good initiatives,” she said.

The governor’s wife suggested a health insurance scheme for the association’s members, saying that there was the need for women to go for routine health checks.

Mrs Anyanwu-Akeredolu also encouraged all FOWOSO members to embrace what she called humanitarian levy meant to support women and children that might be in distress.

“We have been doing a lot to help women and children in distress and supporting them in time of need. We need to extend little hands of help to somebody that needs it tomorrow, ” she said.

Speaking on behalf of the executive members, Mrs Anyanwu-Akeredolu promised to keep the fire burning, saying that the team would not disappoint the association.

Oluwatobiloba Fademi, the Chief Whip of the association, noted that FOWOSO was initiated in 2017 by the governor’s wife with the aim of empowering women in the state both intellectually and materially.

Ms Fademi, a Senior Special Assistant on Media to the governor’s wife, added that FOWOSO’s desired women to stand on their own, socially and economically.

“Social-economic empowerment of women is the aim of FOWOSO. In the past four years, we have gone round the 18 local government areas of Ondo State, empowering women with skills and others.

“Another era of FOWOSO has started with the second tenure of our amiable governor.

Members have come together -wives of Ondo State officials and female political appointees – to continue the project of making people better,” she said.

According to her, FOWOSO has taken up victims of rape, violence and incest, giving them financial support and succour.