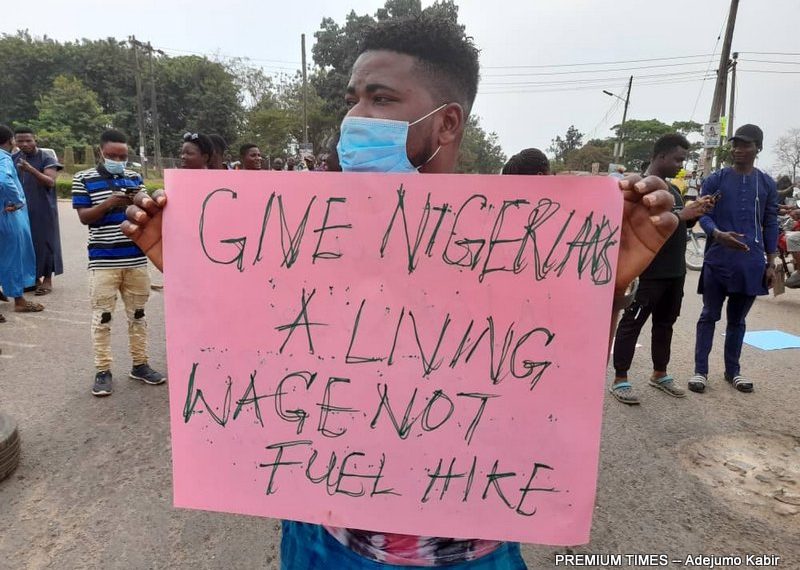 Earlier on Friday, some students challenged transporters who were forcing them to pay N70 as transportation fee for places that used to be N50.

Earlier on Friday, some students challenged transporters who were forcing them to pay N70 as transportation fee for places that used to be N50.

As a result of the confrontation, some students were harassed and briefly detained by security officials of the institution.

Undeterred by this move, the students returned to the campus gate on Saturday morning with placards.

Speaking with PREMIUM TIMES, Kazeem Israel said the protest was to condemn any attempt to increase PMS pump price.

“It is public knowledge that PPPRA released a document yesterday stipulating the price of PMS at #212, and, oil marketers all over adjusted the price to same almost immediately. Fortunately, after criticism from different angles and as a result of the balance of force, PPPRA pulled down the document announcing new fuel price just to make it appear as if it never happened in the first instance.

“As we are gathered here today, the message we are passing to the Federal Government is for them to know how resolute and determined we are as students to resist any form of increment”, Mr Israel, the Zone D spokesperson of National Association of Nigerian Students (NANS) said.

“We know that there is definitely a plan by the Federal Government to increase PMS pump price as contained in the signal which was sent to Nigerians yesterday. As students, we condemn any attempt to increase PMS pump price as that will be the most senseless, inhumane and retrogressive policy to be thought of at this crunching economic period”, he said.

Another protester, who simply identified herself as Salvation, said she joined her colleagues because “directly or indirectly, the increase in fuel pump is going to affect me as a student, I must, however, together with others concerned citizens, resist the hike. Imagine me spending over #200 on transportation when fuel price was #165 per litre. How much will I spend now?”

A final student of computer science and activist, Olowolafe Dunsi, said the government’s attempt to increase fuel price is “unreasonable”

“The increment or attempted increment can never be justified. It is rather saddening that at a period when governments of the world are planning to alleviate the suffering condition of their people owing to the harrowing effects of the pandemic. (The) Nigerian government has increased pump price more than thrice and is still attempting to do more.

“At this point, we must ask ourselves what exactly do we have a government for? This is exactly why we are here today.”

PREMIUM TIMES on Friday reported that the PPPRA on Thursday evening announced an increment of petrol to N212 per litre. Following public outrage, the statement announcing the hike was pulled down on its website.