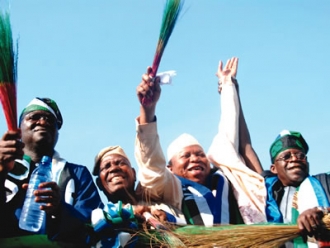 Some party members of the Action Congress of Nigeria (ACN) in Lagos Thursday said that the state government and local government chairmen foot the bills for the traditional clothes donned by guests at the 60th birthday celebration of Bola Tinubu, the former Lagos State governor.

Thousands of guests at the Teslim Balogun venue of Thursday’s event donned different shades and styles of the blue traditional fabric imprinted with the celebrant’s trademark cap and eye glasses.

“State government and Chairmen of all the local governments in the whole of Lagos State contributed so that people can participate,” said Justina Omorogbe, one of the women leaders in Surulere.

Another party chieftain, Bode Kolawole, said that it was “just a voluntary something.”

“Anybody can just buy it,” he said.

“Like from my own personal experience, I had bought for ten people from my own private pocket,” said Mr. Kolawole, a former local government chairman of ACN.

The former governor’s week long birthday celebration continued on Thursday with traffic along the ever-busy Ikorodu road and other adjoining routes grounded throughout the day.

The previous days had seen him visit some Charity homes in Lagos, the Lagos State House of Assembly holding a special session in his honour, and a colloquium and book presentation.

With all connecting roads leading to the stadium in Surulere barred from vehicular movement; traffic on major roads advanced at a snail speed.

Seun Alimode, a commuter along the Ikorodu expressway, said that the decision to “block the roads for just one man” was not fair to other citizens.

“What are you saying? This country belongs to all of us. How can they make me suffer in traffic for more than four hours because someone is marking a birthday?” he fumed.
The heavy traffic, which began in the early hours of the day, stretched several kilometres from the stadium to Maryland. The gridlock also affected other adjoining roads in Surulere.

“I’ve parked my vehicle, there is no work for me today since they have blocked our route,” said Tony Obu, a commercial bus driver plying the Doyin-Ojuelegba route.

While commuters outside the venue were left in the pools of their sweat in the hot Lagos weather, guests inside the stadium were treated to a sumptuous reception.

Unlike the colloquium at the Eko Hotels and Suites on Wednesday which was strictly by invitation; the gate pass into the stadium was wearing the traditional attire.

“Beyond almighty God, he (Tinubu) is the greatest influence in my life,” Rauf Aregbesola, Osun State governor, told the audience.

Other state governors from the ACN controlled states took time to pay glowing tributes to the “Jagaban (leader) of Africa.”

Adams Oshiomhole, the Edo State governor, recalled how, when he was the leader of organized Labour, the celebrant tipped him off about a surreptitious meeting between some labour leaders and government officials and captains of industries to “undermine labour’s offensive against the federal government.”

Kayode Fayemi, of Ekiti State, said that he does not know how to pay tribute to “a political phenomenon who has affected his life for almost two decades.”

The merry making was not restricted to the state-owned stadium, party faithfuls across the state organized local parties to honour their leader.

At Surulere, party members gyrated to loud music from a giant sized loudspeaker.

“He has been a man who has been fighting for the nation, just a pity he’s now getting old,” said Mrs. Omorogbe