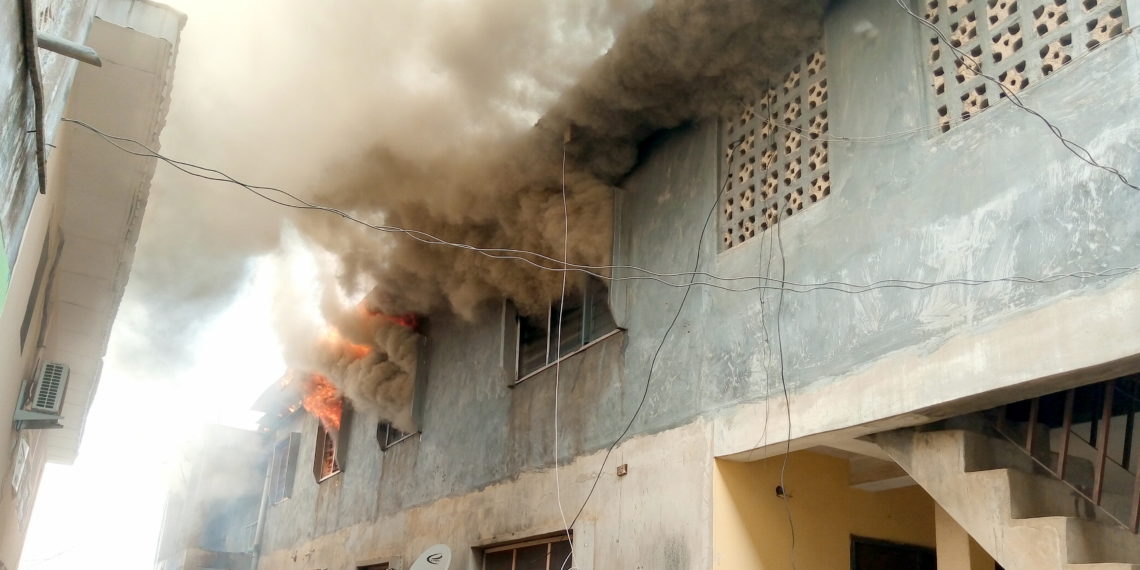 House on fire in Ondo State

Inferno razes building in Ondo as fire truck breaks down

An official of the fire service says the failure of the equipment to work was not a deliberate act.

Officials of the Ondo State Fire Service on Wednesday watched helplessly as fire razed a storey building in Akure, the Ondo State, destroying property worth millions of naira.

The incident occurred just as the state governor, Oluwarotimi Akeredolu, and his deputy, Lucky Aiyedatiwa, were being sworn-in for a second term in office.

Although there is no official account as to the cause of the fire, residents who live nearby suspect the incident could have been caused by a power surge.

Some of the tenants who had left home before the fire outbreak lost all their properties to the inferno. Refrigerators and other electronic home appliances were consumed in the fire, as well as clothes and furniture.

Residents said as soon as the fire started, the Ondo Fire Service was contacted and their operatives mobilised to the scene.

In spite of the presence of the fire truck fully loaded with water, the fire engine refused to work and the officials watched helplessly as the fire consumed the properties.

The development angered the residents who expressed disappointment.

A witness, Ademola Olowookere, lamented the inability of the fire service to save the situation, despite being in the state capital. He said the development had proved that the government had failed.

“Because before now fire incidents have been happening and this fire service has not been able to do the needful and yet the situation still persists. After this one now who knows where fire incident will happen. It is very unfortunate,” he said.

“So, we are using this medium to call on the state government to do what is necessary.”

A victim of the fire, Dorcas Ayadi, who operated a restaurant at the building, said she was in the building when the fire began.

“Someone just called me out that there is fire burning upstairs and when I came out, we started calling people for help and we started to control it,” she said.

“But it is very unfortunate the fire had entered the whole ceiling so we could not do anything again and we started calling the fire service because we were destabilised. The fire was too much. All my items worth millions of naira have been burnt.

“So we are pleading with the state government to get professionals to handle the fire services because when they got here they could not do anything while the building was burning.

“Government should please do the needful in other to provide solution when we have incidents like this.”

Reacting to the incident, the state’s fire service said the failure of their equipment was not deliberate. An official said it was as a result of a “technical problem” which occurred, causing the fire engine to fail.

“Actually this morning we were at the Dome, were standby there for the inauguration of Governor Oluwarotimi Akeredolu‘s second term in office where (when) we received the call that there is fire outbreak and immediately we responded to the call,” the service’s Public Relations Officer, Victor Oshin, said.

“When we got to the scene of the fire incident, it is quite unfortunate that the machine develop a technical fault.

“It was not intentional and this is the only existing vehicle we have here in Ondo State we don’t have any ‘appliance’ in Ondo. The only alternative we have (had) is to call our men from neighbouring state, Osogbo (Osun). That is the problem.”

EXCLUSIVE: How U.S. will recover $10.7m restitution from Obinwanne Okeke