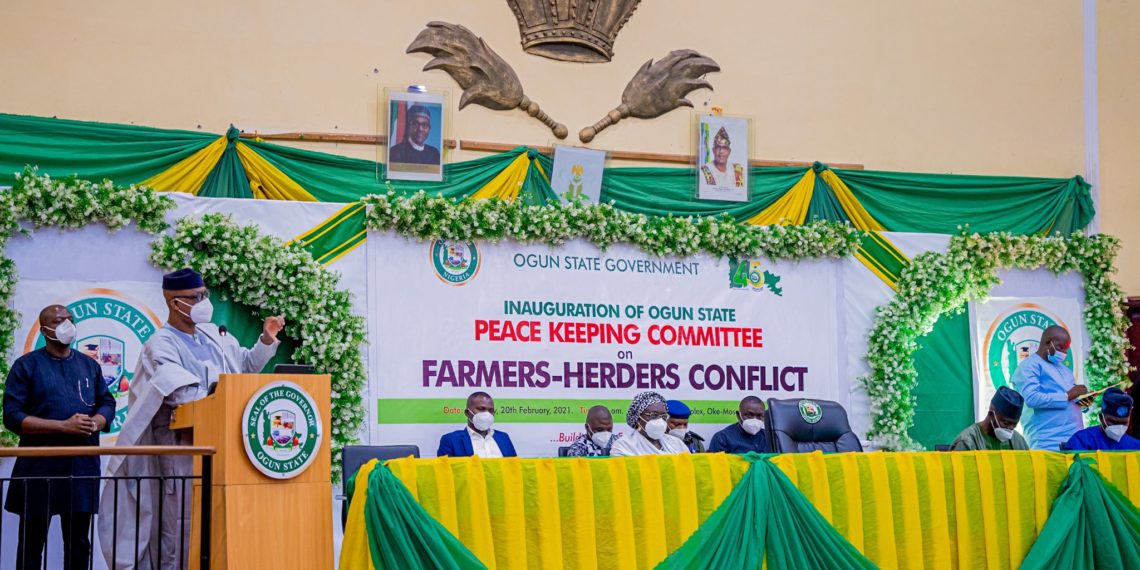 The committee is expected to unravel activities that often lead to the farmers/herders crisis in the state.

The committee, inaugurated on Saturday, is expected to look into the remote and immediate causes of their clashes, which in recent times have led to killings.

According to Mr Abiodun, the committee would also find a lasting solution to the crisis.

Before now, PREMIUM TIMES has reported clashes between farmers and herdsmen, particularly at Yewa axis of the state.

In January, an acclaimed warlord, Sunday Adeyemo, popularly known as Sunday Igboho, visited the state in an attempt to evict Fulani herdsmen but he was rebuked by the state government.

Traditional rulers in the state had also called on the state and federal governments to assist in curbing the atrocities of suspected herdsmen.

Now, as part of efforts to secure the state, the state governor inaugurated a peace committee at the Oba Complex, Oke-Mosan, Abeokuta, Ogun State.

The Committee is chaired by a former House of Representatives member, Kayode Oladele.

“Government believes with the committee, what really happened to disrupt the peace of the areas will be made known because knowing what happened will prevent occurrences and how to solve it.

“You will ensure that the clashes do not happen again. But if it happens, you will know the steps to be taken. You will also look at any other matter that threatens peace in the state,” Mr Abiodun said.

He said the committee has four weeks to carry out its activities and submit a report.

Mr Abiodun also said relief items would be given to all farmers and herders affected in the previous clashes as he ordered the committee to liaise with the Ministry of Special Duties for seamless distribution.

He also asked the Ministry of Housing to provide accommodation to those whose houses were destroyed.

Women in Agriculture: How missing Pharmacy admission helped me – Farmer