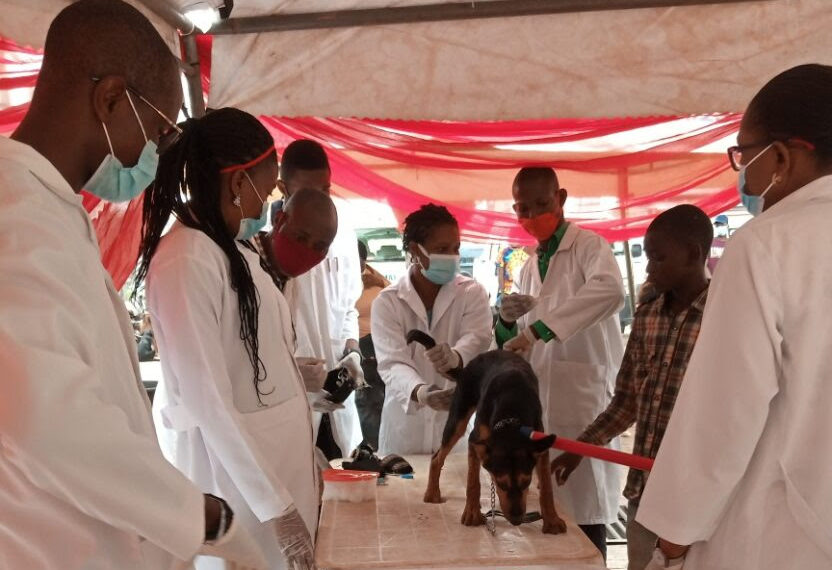 FILE PHOTO: Veterinary Doctors at the Lagos State Ministry of Agriculture, vaccinating a dog against rabies during the flag-off of Lagos Free Anti Rabies Vaccination Campaign.

"A lot of dogs in the state are not registered or licensed hence a lot of rabid dogs could be on the prowl."

The Lagos State government has said it will vaccinate at least 1.5 million dogs within the next two weeks under its free anti rabies vaccination campaign.

The Lagos State Commissioner for Agriculture, Abisola Olusanya, made the disclosure on Tuesday during the flag-off of the vaccination campaign held at the Palace of Oba Ayangburen, in Ikorodu, Lagos State.

Ms Olusanya said that in order for the vaccination campaign to be effective, it would be held year-in year-out for the next three years.

She urged all individuals, corporate organisations and communities to collaborate with the government toward responsible dog ownership to curb the strain of animals with rabies in the environment.

“I am highly delighted to be here today to declare open our anti-rabies campaign with the theme: “Say No to Rabies in the 21st Century in Lagos State.

“A lot of dogs in the state are not registered or licensed hence a lot of rabid dogs could be on the prowl.

“They are also the major source of transmitting the dreaded rabies disease when unvaccinated.

“Dogs that are properly owned and kept provide great benefits of companionship, security, health and research, amongst others.’’

According to the commissioner, the exercise is important since rabies can easily be prevented through vaccination.

The commissioner, therefore, urged pet owners to bring their dogs and cats for the vaccination exercise.

She said the state government as a responsive government has made the exercise free for the citizenry.

“With an estimated 1.5 million dogs in the state, I hereby enjoin all individuals, corporate organisations and communities to collaborate to a more responsible dog ownership to curb the strain of rabid animals in the environment.’’

The commissioner said the exercise would take place at centres in the five divisions of the state.

“We have seven state veterinary clinics and so many other private clinics out there, so it is critical that we take our pets to some of these centres to get them vaccinated as quickly as possible.

“I urge you to ensure the registration and yearly vaccination of pets and other animals at the nearest government veterinary hospitals, clinics as well as government’s registered private animal health care centers at the clinic of their choice.”

He said that less than five per cent of dogs are vaccinated in Nigeria due to the high cost of the vaccine.

Mr Alabi, represented by Mairo Kachalla, added that the disease is transmitted through the bite of an infected animal or man with 99 per cent fatality if efficient post exposure prophylaxis treatment was not instituted early.

“Rabies is a highly fatal viral disease affecting all warm-blooded animals. In spite of the high fatality, the disease is 100 per cent preventable.

“Through mass dog vaccination and enlightenment campaigns, it can be prevented as dogs account for 99 per cent of human deaths resulting from rabies.

“The World Organisation for Animal (OIE) recommends that at least 70 per cent of dogs should be vaccinated annually for three consecutive years to break the transmission cycle of rabies and consequently eliminate the disease.

“To achieve this global target, the Department of Veterinary and Pest Control Services sought for additional international support and OIE responded by donating 200,000 doses of Anti-Rabies Vaccine (ARV) to the country.’’

According to him, rabies is one of the priority Trans boundary Animal Disease and has remained endemic in Nigeria since it was first reported in 1912.

“This disease thrives in low to medium income countries of Africa and Asia affecting mostly children of school age due to ignorance. It is estimated globally that 70,000 people die of rabies annually.

“Some of the constraints in the control of this disease in Nigeria is that majority of dogs are unlicensed, unvaccinated and allowed to roam freely in the communities.

“In Nigeria, it has been reported that less than five per cent of dogs are vaccinated due to high cost of the vaccine.

“As a result of the increase in the number of cases globally and the impact on public health, the tripartite collaboration of WHO, OIE and FAO set an agenda for the eradication of dog-mediated human rabies by the year 2030,’’ he said.

Mr Lukman, who spoke on the “Effect of Rabies In Humans”, said the vaccination campaign was a great step to eradicating rabies in the country.

He said that rabies is caused when an infect dog bite or scratch human, thereby, the virus infects the central nervous system, causing disease in the brain and also death.

“All patients that present full blown rabies are going to die.

“However, this disease is preventable and this is the purpose of this gathering,’’ he said.

Mr Lukman urged dog owners and the general public to vaccinate their pets regularly and report to the hospital in case of any eventualities.

A dog breeder, Oluwafisayo Adeolu, commended the state government for the support to vaccinate dogs against rabies.

Mrs Adeolu said that eight of her dogs were vaccinated at no cost.