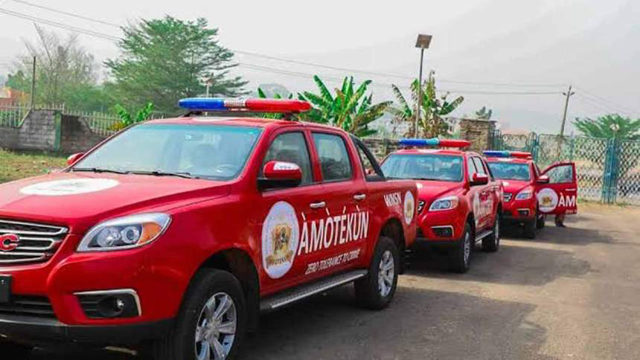 The corps had last week discovered illegal gold mining activities in the forest and arrested some persons involved.

The Ondo State Security Network Agency (popularly known as Operation Amotekun) has clarified that the killers of a farmer and a vigilante operative at the Jugbere Farm Settlement in Owo last Thursday, were illegal miners and not herdsmen.

The suspects were also alleged to have burnt down the van and motorcycle of the Amotekun operatives during the attack.

The Director-General of the Amotekun Corps, Adetunji Adeleye, confirmed that four persons have been arrested in connection to the incidents.

He said the suspects were a criminal gang of arsonists and illegal miners operating within the Owo forest.

The corps had last week discovered illegal gold mining activities in the forest and arrested some persons involved.

It is yet to be ascertained if the recent attacks were a retaliation from the gang of illegal gold miners.

The Corps Commander also denied that any of his men was killed in a crossfire with the hoodlums, saying the officer alleged to have been killed is alive.

Mr Adeleye told journalists in Akure on Sunday that no crossfire had occurred between the herders and the Corps’ operatives to necessitate the loss of lives as being speculated.

He explained that the Coordinator of the network in Owo, Sesan Adebayo, who was alleged to have been abducted by herders, is alive and at his duty post.

“On the issue of arrest, we arrested a number of suspects that are directly connected from the preliminary investigations with either kidnapping, illegal mining, armed robbery in the farmland and farm destruction,” he said.

“We are working on that and in the appropriate time, they will be handed over to the relevant security agencies for further investigations and prosecution where necessary.

“In one of the operations that we are involved in, it’s alleged that so many members of the Ondo State Security Network Agency, Amotekun Corps were killed.

“I want to say that not a single soul out of the ones I recruited died at any point in time. And specifically on the Owo Ute incident, no single member of the corps or officer died during this particular operation.

“There was actually no crossfire between the herdsmen and Amotekun Corps.

“So, the area where the crisis actually happened was predominantly occupied by the workers of this dastardly act. What I mean by that is some of them are either working as kidnappers or working as illegal miners. A good number of them also had their cattle destroying the farm settlement and the farm around.

“In the cause of the quarrel, they went to a nearby village and even set it ablaze and our vehicle happened to be parked around that same village which they set ablaze.”

The corps is currently enforcing a quit notice given to herdsmen illegally occupying the state’s forest reserves as a measure to stem the rate of criminality and kidnapping traceable to the herdsmen.