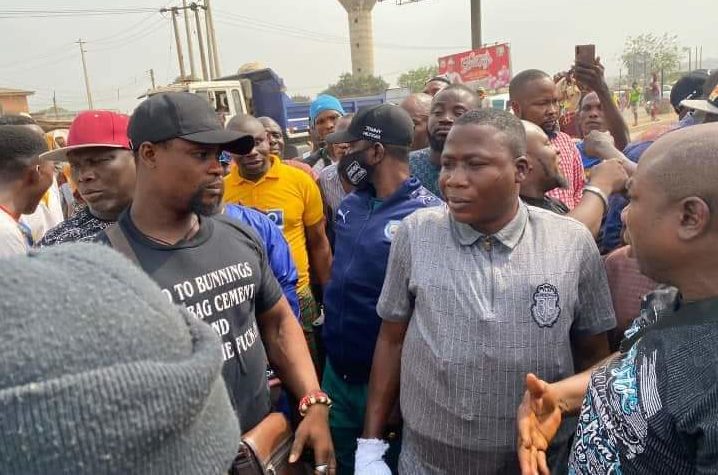 The Ogun government on Monday refuted reports suggesting that it enlisted the help of Sunday Adeyemo, a.k.a Sunday Igboho, to combat crimes in the state.

The State Commissioner for Information and Strategy, Abdulwaheed Odusile, dismissed the report in a statement issued in Abeokuta hours after Igboho arrived the state.

Mr Odusile said that the report which emanated from an interview granted by Remmy Hazzan, the special adviser on public communication to Governor Dapo Abiodun, was quoted out of context.

“The interview was twisted to achieve sensational effects.

“In the interview, Hazzan had said that the state government, in its usual inclusive approach to governance, would continue to work with all the stakeholders, both within and outside the state to ensure security of lives and property.

“Sadly, however, this statement was disingenuously twisted to mean that the state had invited Mr. Adeyemo (Igboho) to help curb insecurity.

“This is regrettable and totally misleading.

“The Dapo Abiodun-led Administration, since inception, has been known to be inclusive in its approach, collaborating and engaging with a wide range of stakeholders including security issues.

“This has resulted in the achievement of the enviable status and recognition we enjoy as the most secured state in the country.

” A recent award given to us by the Business Day Newspaper, among other organisations is a testimony to this,” he said.

Mr Odusile recalled that the Dapo Abiodun-led administration had taken giant strides in securing the state since it came to office.

“Upon assuming office, this administration restructured the Ogun Security Trust Fund and put the critical stakeholders (private sector) at the driving seat.

“It strengthened the engagement with security agencies in the state and provided them with 100 Hilux patrol vehicles, 200 motorcycles and other equipment to make them more effective and efficient.

‘We have also appointed two Special Assistants ( on ethnic relations) to ensure smooth interface with non-indigenes on a wide variety of issues, including security.

“This constant stakeholders’ engagement approach runs through all the government activities and programmes.

“Therefore, Hon. Remmy Hazzan’s statement of working with stakeholders within and outside the state should be viewed within this context.

“For avoidance of doubt, Ogun government will continue to deploy all constitutionally sanctioned means to fight crimes and criminals in the state.

“It will continue to work with institutions that the constitution and other statutes have saddled with the responsibility of protection of lives and property.

“At all times, the government will ensure that all security agencies and indeed all stakeholders operate within the ambit of the law.

” The government will neither welcome nor endorse any initiative that amounts to self-help or one that is outside the contemplation of the constitution,” he said.

Mr Odusile assured that the government would continue to attract and welcome all those with legitimate reasons to live and work in the state, adding that “Ogun is home to all Nigerians and foreigners alike”.

He, however, stressed that the state would not be conducive for any group or individuals who tried to undermine peace, security and social wellbeing of the citizens.

The commissioner explained that the government had directed the security agencies to be unrelenting in swiftly apprehending and bringing to justice any perpetrator of crimes in the state.

Mr Odusile who thanked the the residents enjoined community and religious leaders as well as other stakeholders to continue to co-operate with the government and security agencies in the joint task of securing the state.

The self-styled Yoruba freedom fighter, Mr Igboho, arrived the state on Monday, saying he was visiting to help expel problematic herdsmen from the state.

Mr Igboho, on arrival in Abeokuta, the state capital told journalists, “We are here in solidarity with our brothers and sisters. Fulani herders are killing us in various South-west states, and that’s why we, the youths, came out to demand our rights.

“That is why I am saying all Fulani herdsmen should vacate Yoruba land. There is peace now in Igangan and that’s not the only place I want peace to reign. We are going to all Yoruba land. I appreciate Ogun governor, he loves his people and that’s why we are in Ogun State today.

“We are going to Yewa now where Fulani kidnappers are terrorising Yorubas in Ogun State.”

Mr Igboho has been in the news recently for giving an ultimatum to herdsmen in the Ibarapa area of Oyo State to vacate the area and upon the expiration of the ultimatum, the home of the Seriki Fulani in the area was attacked.

Consequently, the Seriki Fulani, who said his house was destroyed and several cars parked within his compound burnt, fled the area for Kwara State with his family.

There have been several reports of criminal activities carried out by herdsmen especially in the Ogun West senatorial district of the state.

However, under Nigeria’s laws, no citizen has the right to expel other citizens or residents from wherever they chose to live or do business in the country.

COVID-19: IGP orders AIGs, CPs to enforce use of face masks, others