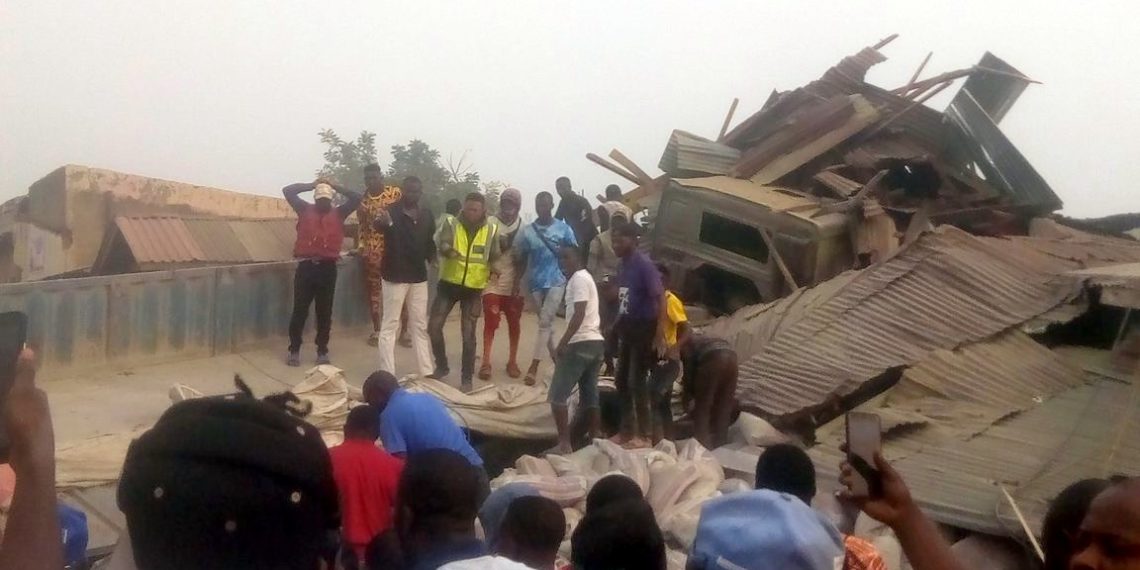 The truck was said to be coming from Obajana in Kogi State before the accident.

No fewer than eight people have been confirmed dead after a truck ran into some residents and students of Adekunle Ajasin University Akungba (AAUA) at the institution’s gate on Saturday.

PREMIUM TIMES, on Saturday, reported how a truck with the logo of Dangote Group, carrying bags of cement, suffered brake failure and rammed into shops in the area at about 6:00 p.m.

The truck was said to be coming from Obajana in Kogi State before the accident.

Our correspondent obtained a video of casualties and also spoke with sources on the spot who are carrying out rescue operations at the scene.

Witnesses at the scene told PREMIUM TIMES that 12 bodies have been recovered as the rescue mission continued on Sunday morning. However, the police only confirmed eight bodies.

“Many people were still in their shops when the incidents occurred. Already, there are 12 dead bodies that have been seen while so many people sustained severe injuries,” Ayo Ajayi, a student of the AAUA said.

Another witness who did not want his name on print, also confirmed to PREMIUM TIMES that 12 individual bodies have been recovered.

“The driver lost control and the truck rammed into the shops. He has since caused gridlock in the area. 12 people have died already. Many government agencies alongside citizens are currently on a rescue mission, searching for more victims,” he said Sunday morning.

While the spokesperson of the Federal Road Safety Corps in the state, Omotola Ogunbanwo, could not be reached, the state police public relations officer, Tee-Leo Ikoro, said as of Saturday night, eight bodies have been recovered.

“Eight people recovered as of yesterday but efforts were on to recover other victims trapped in some of the shops and amidst the cements,” the police spokesperson said Sunday morning.

The Dangote group is yet to react to the accident with a spokesperson, Anthony Chiejina, asking to be given more time as he was in church when contacted.

Meanwhile, the management of AAUA in a statement signed by its Acting Registrar, Opeoluwa Akinfemiwa, has commiserated with the Akungba community in general on the sad incident.

“Meanwhile, as a temporary measure, Management has directed that the main gate should be closed with immediate effect. Staff and students are therefore requested to make use of the following: sports Center gate, guest house gate, eastern gate and the two small gates (i.e the one leading to the Works & Services Department and the one leading to the Student Union building).”

“As a mark of respect for our departed students, the examinations scheduled to start on Monday 24th January, 2021 is hereby postponed till further notice. We appeal that our students should remain calm, as the University mourns those that lost their lives in this unfortunate incident.

“The University and the Ondo State Government are working round the clock to institute permanent solutions to the problem of incessant road accidents along Ikare-Akungba road. Once again the University Management commiserates with the University community, the families, victims and people of Akungba Akoko over this unfortunate incident.”

The state commissioner of information in Ondo State, Donald Ojogo, did not respond to calls and text messages at at press time.