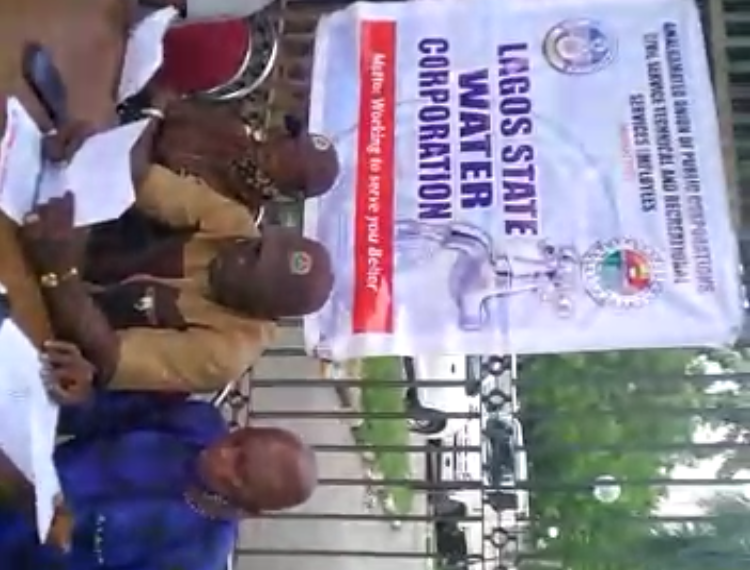 The staff of the Lagos State Water Corporation have suspended the industrial action they embarked upon last week.

The workers, under the aegis of Amalgamated Union of Public Corporations, Civil Service Technical and Recreational Services Employees (AUPCTRE), had embarked on the strike in protest of non-payment of entitlements by the state government.

In a message sent to all staff, union leaders said they are “relaxing” the strike with immediate effect.

“Due to the Lagos State Government directive on the second wave of covid 19 and in the interest of the state and looking at the current realities and in the spirit of safety first, it is imperative to inform you that the leadership of the union and the workers in our forum today Monday 21/12/20 at the headquarter Ijora have decided to *RELAX* all activities concerning the strike action with *immediate effect,*” the message read.

The decision to suspend the strike came barely a day after a meeting between the workers and the LSWC management ended in a deadlock, occasioned partly due to the absence of Muminu Badmus, the water corporation boss, who is reportedly in self-isolation.

At a press briefing last week, Biodun Bakare, the AUPCTRE state secretary, accused the management of “incompetence and abdication of responsibility.”

“It will interest you and Lagos residents to know that the LWC management has the unenviable record of owing workers salaries and other statutory deductions,” said Mr Bakare.

“As we speak, workers of the corporation are yet to receive October and November salary as at December 17. At a time like this, responsible managements are already done sorting their workers Christmas and New Year bonuses. Unfortunately, workers in the corporation and their families will be deprived of the merriment this festive period. This is unfortunate and unacceptable.

“Also, we want the public to know that the LWC is yet to pay workers their accrued bond since 2007 before the contributory pension scheme was introduced. Also, they are owing over two years responsibility allowance, co-operatives deductions and pension fund deductions.”

The workers also demanded an overhaul of the infrastructure and management of the water corporation.

“We must caution that putting water in the hands of private individuals and for profit-only organisations is not the solution. What is missing is the political will from the government to make water corporation more responsive and functional.”

On Monday afternoon, Mr Bakare told PREMIUM TIMES that the workers have received their outstanding salaries, a 30 per cent Christmas bonus, and one-month minimum wage arrears out of the three months owed. The pension arrears and co-operative deductions, however, remain unpaid.

Mr Bakare said the strike would continue after the COVID-19 second wave because they are yet to reach any agreement with the management.