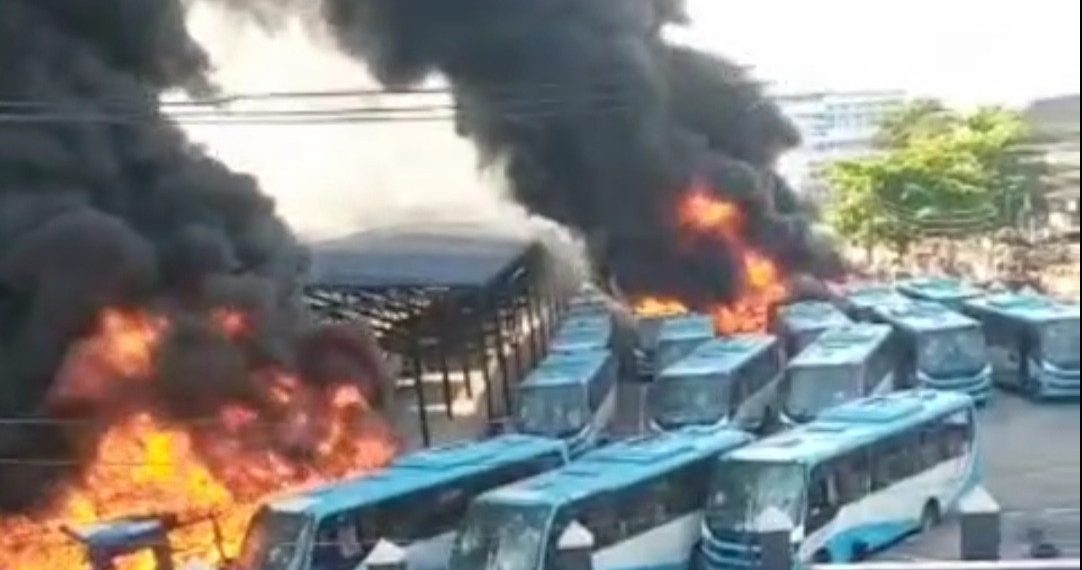 A large number of new BRT buses yet to be deployed to routes but parked in the terminus situated behind railway line in Oyingbo, have all been consumed by the raging fire.

A correspondent of the News Agency of Nigeria (NAN) reports that the miscreants, who defied the 24-hour curfew imposed by Lagos State Government, burnt down the terminus, recently opened at Oyingbo in Mainland Local Government Area, at about 8.30 a.m.

NAN reports that the governor, Babajide Sanwo-Olu, had on Tuesday, imposed a 24-hour curfew following violent attacks on some police stations in Orile-Iganmu and other areas in Lagos.

A large number of new BRT buses yet to be deployed to routes but parked in the terminus situated behind railway line in Oyingbo, have all been consumed by the raging fire.

NAN also reports that armed soldiers were quickly drafted to the Denton Police Station, near the Oyingbo bus stop, to prevent attack on the station by the hoodlums.

It was also gathered that some establishments notably associated with the National leader of the ruling All Progressives Congress (APC), Bola Tinubu, were attacked by the hoodlums.

Among such establishments are the TV-Continental at the old Tollgate and Oriental Hotel on Victoria Island.

The governor imposed the curfew to take effect from 4 p.m. on Tuesday as part of his strategies to end the violence which trailed the #EndSARS protest in Lagos.

The curfew was aimed at restoring peace and normalcy to Nigeria’s commercial capital following wanton destruction of infrastructure by suspected thugs who hijacked the peaceful protest against police brutality.

A correspondent of the News Agency of Nigeria (NAN) who monitored the situation at Iyana-Ipaja and its environs observed that commercial banks were closed, while private security operatives stood on guard.

Majority of fuel stations and private businesses did not open in compliance with the government’s directive.

Government security operatives who normally operated under the Iyana-Ipaja Bridge were nowhere to be found.

A few commercial buses, however, operated on the Lagos-Abeokuta Expressway which was barricaded by some aggrieved youths who demanded money before vehicles could be allowed to go through.

The Chairman, Forum of All Local Branches Coordinators, National Youth Council of Nigeria, Lagos State, Salihu Adewale, told NAN that the alleged shooting at protesters at the Lekki Toll Gate on Tuesday was unfortunate.

Mr Adewale said: “we condemn the direct shooting at protesters. We would have loved that the military and security personnel continued in the civilised manner they had conducted themselves at the beginning of the protest.

“They should not allow the angry youths to push them to the wall, but we need to put it on record that the protest has been hijacked by people with ulterior and ill motives who want to bring Nigeria down.

“The government has been calling for dialogue and the protesters have been turning down the offer, but we didn’t expect what happened yesterday.’’

Mr Adewale also appealed to protesters to obey the curfew; take their protests online and restrategise to achieve their objectives without further bloodshed.