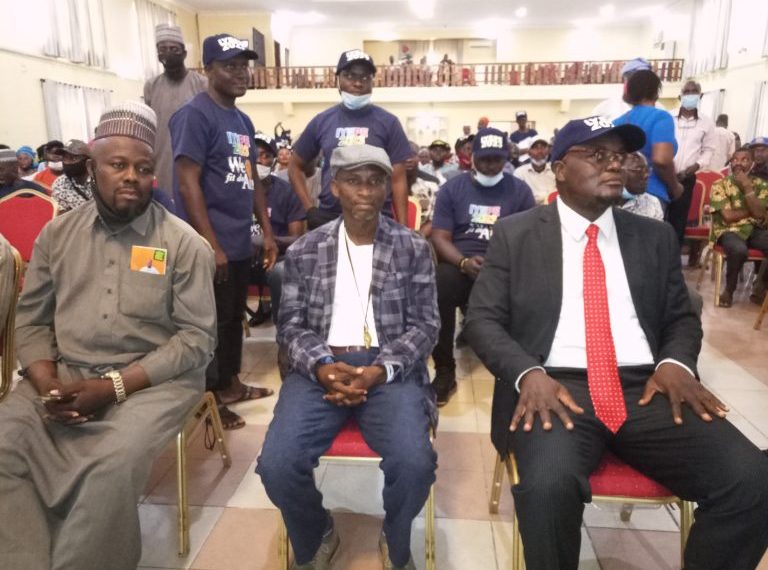 Abdul-Hakeem Abdul-Lateef and other participants at the declaration event in Lagos.

Ex-Lagos commissioner to challenge Sanwo-Olu for governorship in 2023

Mr Abdul-Lateef urges Lagos residents to believe that nothing is impossible, saying time has come for votes to begin to count.

Abdul-Hakeem Abdul-Lateef, a former Commissioner for Home Affairs, has declared his intention to contest for office of the Governor of Lagos State in the 2023 election.

Mr Abdul-Lateef is known as a member of the governing All Progressives Congress and incumbent Lagos Governor, Babajide Sanwo-Olu, who is in his first term, is expected to seek reelection in 2023.

Mr Abdul-Lateef made his governorship declaration during the inauguration of “Iyepe 2023 We Fit Do Am” project, a movement meant to create political awareness among Lagosians.

“There is apathy in the county; not so many people are involved in voting these days. It has been going down in Lagos State.

“Out of about 24 million people in Lagos State, during the last voting exercise we witness less than 1.5 million voters.

“You can see that there is gradual level of disinterestedness by the populace. So we have started this movement to raise political awareness to encourage people to have hope that we can have transformation.

“By the time we encourage more people to participate in politics, we believe that things will change for the better by the grace of God,” he said.

According to him, “Iyepe” is a symbol of unity which reminds us that we are all from Adam who was created from sand.

“A leader who bears Iyepe will bring about unity among the people,” Mr Abdul-Lateef said.

According to him, the greatest challenge in the nation’s politics is apathy, which is lack of participation by the people.

He urged Lagos residents to believe that nothing was impossible, adding that the time had come when votes would begin to count so as to bring into the leadership competent and committed people.

Mr Abdul-Lateef, who was yet to name his party of choice to contest the governorship election, said that he was optimistic that Lagos residents would support him when the time comes.

He, however, commended the leadership role of All Progressives Congress National Leader, Bola Tinubu, for working towards leading Lagos State to the promise land.

He also commended the efforts of the past governors of Lagos as well as that of Governor Babajide Sanwo-Olu for their tremendous leadership role in the state.

“We are here to celebrate a symbol of humility, a democrat and a politician who is coming out openly and declaring his ambition to become the next Governor of Lagos State.

“We are here because we support this aspiration and know it is in the course of justice; it is fair call, it is belated, he was to become deputy governor eight years ago.

“We believe that 2023 to 2027 dispensation belongs to the Muslims and this slot must not be wasted,” Mr Akintola said.

He described Mr Abdul-Hakeem as a consistent politician and a spiritual leader, adding that his combination of the two attributes would transform Lagos State.

COVID-19: Why we insist on post-departure tests – NCDC