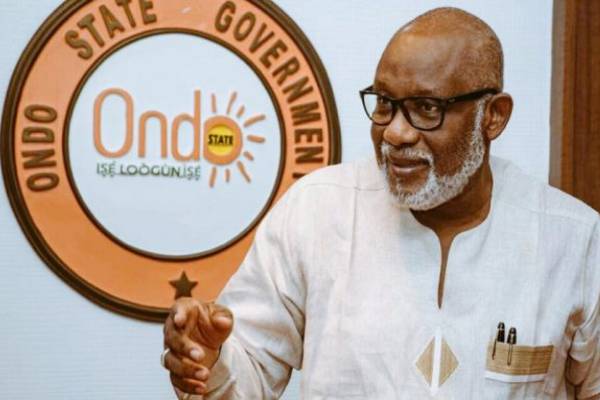 Mr Mimiko described Mr Akeredolu as a disappointment in office.

As the campaigns for the October 10 governorship election gain momentum, there is a renewed hostility between a former governor of the state, Olusegun Mimiko, and his successor and incumbent governor, Rotimi Akeredolu.

At a campaign rally on Saturday, Mr Mimiko described Mr Akeredolu as a disappointment in office, having failed to lift the people up from their state of poverty.

The former governor is the strongman behind the deputy governor, Agboola Ajayi, whose candidacy at the Zenith Labour Party,has further stained the relationship between both leaders.

Mr Ajayi, who is still the incumbent deputy governor in spite of his difference in political affiliation with the governor, is viewed by many as having a brighter chance to upstage his principal in the coming election given his acceptance in the large voting southern senatorial district.

His cards in the central zone have also received a boost following Mr Mimiko’s influence across the district.

Mr Akeredolu of the All Progressives Congress (APC) is hanging on the power of incumbency and dominance in the northern zone of the state to win the election.

Mr Mimiko, who was speaking at Ile-Oluji in Ile-Oluji/Okeigbo Local Government Area during the campaign tour of Mr Ajayi, said the policies of the current administration were anti-people following the cancellation of free health services which he (Mimiko) instituted and as well as the increase in tuition fees paid by tertiary institutions in the state.

The former governor, who is now the national leader of the ZLP and worked with three governors before becoming governor for eight years, said that Mr Akeredolu’s government had failed the people of the state in all critical sectors affecting the well-being of the people.

“There is no person that will say he has performed. But how do we differentiate performance? Any government that has not democratised education is a bad government,” Mr Mimiko declared.

“This government that hiked school fees is a bad government. Akeredolu’s government is an enemy of the people. Anybody that votes Akeredolu is selling his children’s future.

“Any government that does not make health free is your enemy. Akeredolu’s government is an enemy of the people by cancelling mother and child and free health for children.

“Any time they come here to campaign for votes ask him, where is our shuttle buses? Where is our abiye? The government that cancelled trauma centre is your enemy.”

Mr Mimiko said the utterances of the incumbent governor clearly showed that he is not part of the state as he had vowed to go back to his base in Ibadan, if not voted for.

The former governor lamented what he said was the failure of his successor to build on the successes recorded in the health and education sectors during his tenure as Governor.

But in a swift reaction, the governor, through his spokesperson, Olatunde Olabode, said Mr Mimiko would be remembered for sacking 10,000 workers in the state during his tenure, and did not have the standing to call another government anti-people.

He said that the current government has not sacked anyone in the state workforce since his assumption of office as governor.

“Those lectures that were sacked unjustly at the Rufus Giwa Polytechnic, Owo and Adekunle Ajasin University, Akungba Akoko are still alive to bear witness to the anti-people government of Mimiko in this state,” said Mr Olabode.

“These workers were only reinstated by Governor Akeredolu. Because of politics, Mimiko killed the Olusegun Agagu University of Science and Technology, Okitipupa (OAUSTECH). What’s more anti-people than the actions of Mimiko in abandoning the various projects left behind by the late Olusegun Agagu?

“The Akeredolu administration came and realised Mimiko only had two mother and child hospitals in the whole of the state. Governor Akeredolu has now expanded from two to seven and they are now across the three senatorial district of the state.

“As we speak, work is ongoing at the Teaching hospital both in Ondo and Akure. Arakunrin Akeredolu has introduced the Contributory health scheme which has also brought about free health care service for children under the age of Five and pregnant women.

“So, on health, Governor Akeredolu has surpassed Mimiko in achievements, just as the Akeredolu administration has recorded significant stride in education and people’s welfare.”

IPOB denies responsibility for attacks on security agents in southeast