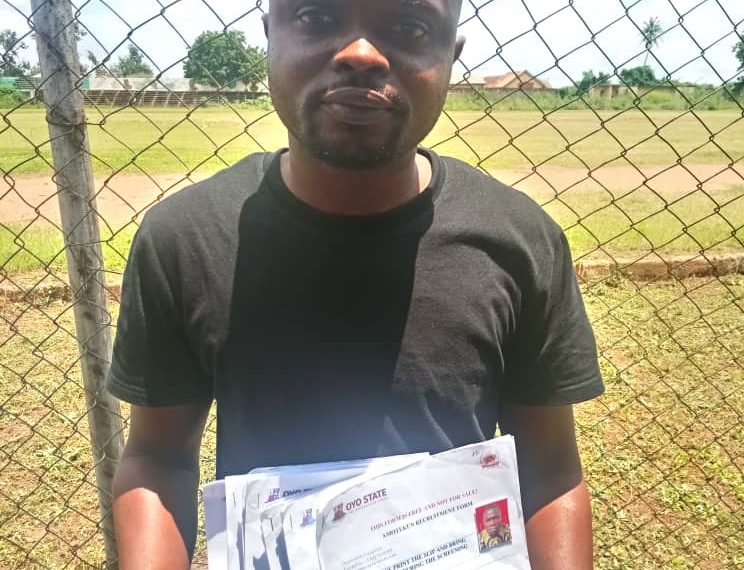 A cyber cafe owner, Adeyemi Agboola, has been arrested for being in possession of 11 fake recruitment forms of the Oyo State Security Network also known as Amotekun Corps.

He was arrested in Oyo town on Wednesday, Premium Times learnt.

Mr Agboola, who owns a cyber cafe along Durbar Stadium Road in Oyo town, was caught on Wednesday with the fake recruitment forms.

He was reportedly selling the fake forms to applicants at the rate of N500 per copy. He also promised to assist the prospective candidates to get the job.

Mr Agboola, when arrested, claimed that he only utilised the opportunity to extort the victims.

The Amotekun Commandant, Olayanju Olayinka confirmed the arrest of the suspect on Thursday.

Mr Olayinka said the culprit would face the law for his action.

He urged members of the public to be wary of individuals that would always want to take advantage of others in the society because the victims were uneducated.

He said, “It is very unfortunate that people can still take advantage of others on recruitment exercise just because the victims are unlettered, we shall dig more to know the number of victims that have fallen for the antics of this man.

“We have handed him over to the appropriate prosecuting security agency, he shall serve as a deterrent to others that might want to thread this bad way, the State government has been working non-stop to alleviate poverty and sundry social issues affecting our people, but we will not allow the common people be cheated by those who think they are cunning.”

The arrest of Mr Agboola is coming a few days after the arrest of a man impersonating as an Amotekun officer in Ibadan.

Kareem Taiwo, who claimed to be an officer of Amotekun Corps was arrested in Ibadan, the Oyo State capital, a few days ago.

Premium Times gathered that Mr Taiwo made efforts to defraud people by claiming to be the recruitment officer for the security outfit.

It was gathered that Taiwo had pasted a notice at the Adamasingba Stadium, venue of the state’s recruitment screening centre with his name and phone numbers, that those interested in joining the Amotekun Corps should contact him.

The Chairperson of Amotekun Corps, Kunle Toogun, confirmed the arrest of the suspect.

He said the general public should be wary of fraudsters in their quest to become members of the corps.

Mr Toogun also used the occasion to inform journalists that screening of applicants into the corps would continue as the exercise had just covered only the Ibadan city axis.

He said, “those that missed their screening have been called to join others for their fresh screening, this will easily pave way for equal participation, although we have encountered so many challenges since we started, some came with forged certificates and documents, you have seen the one that just happened, but we are unrelenting.

“The screening will continue with the less(er) cities, the Oke-Ogun zones one and two, Ido, Ibarapa among others.

We want to make the exercise as open and less cumbersome to applicants as possible. The governor has demanded for openness and that is exactly that we are giving.”