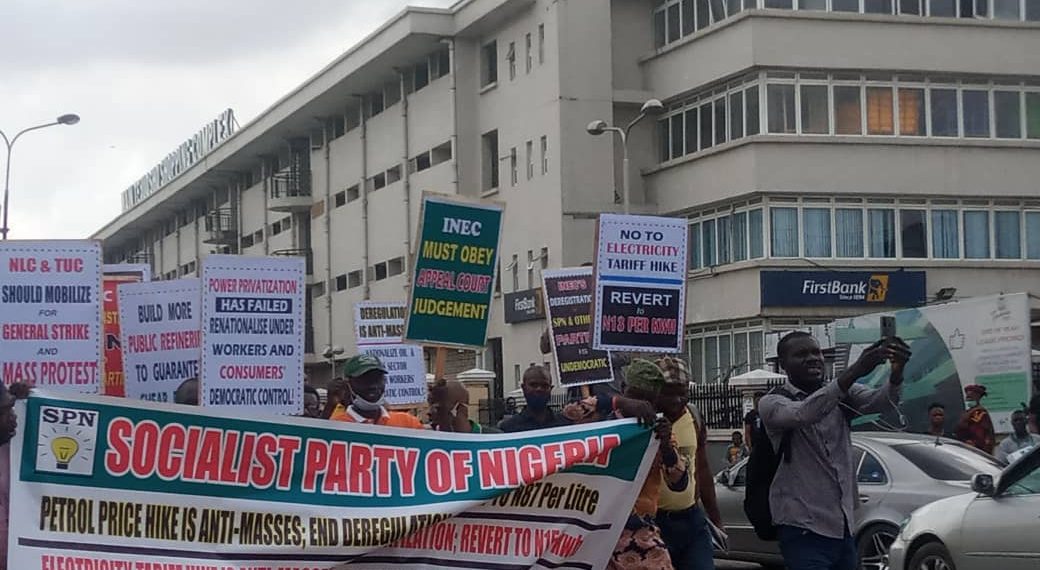 byBidemi Akanbi
Reading Time: 3 mins read
0
The Socialist Party of Nigeria (SPN) has called for the unconditional release of journalists and protesters that were arrested in Lagos.
Premium Times gathered that police in Lagos on Thursday arrested 14 protesters who marched in Lagos in protest against the deregistration of political parties and increase in fuel price and electricity tariff.
Four journalists, who were covering the protest, were also arrested and taken to the state police command in Ikeja.
The protest was organised by the Socialist Party of Nigeria; the group is demanding a reversal in the actions of the government.
Some of the arrested protesters include Dagga Tolar, SPN NEC member; Chinedu Bosah, SPN National Secretary; Hassan Taiwo Soweto, SPN National Youth Leader, and 11 others.
The arrested journalists are Ifeoluwa Adediran of PREMIUM TIMES, Abiodun Ayeoba of Sahara Reporters; Awoniyi Oluwatosin of ObjecTV media and Daniel Tanimu of Galaxy TV whose camera was seized.
But, SPN while reacting, called for the immediate release of the arrested persons without delay.
The group in a statement signed by its National Chairperson, Abiodun Bamigboye, condemned what he termed as unjust arrest of members and journalists for protesting against anti-poor policies by the President Muhammadu Buhari government.
Mr Bamigboye  in the statement sent to Premium Times, on Thursday, demanded an end to the violation of human rights under the Buhari government.
He said, “The Socialist Party of Nigeria (SPN) strongly condemns the brutalisation and arrest of members of our party and journalists by officers of the Nigerian Police Force. The arrested SPN members and leaders were on a peaceful protest today in Lagos to demand immediate reversal of the obnoxious increase in electricity tarriffs and fuel price by the Buhari/APC government, and for Independent National Electoral Commission (INEC) to respect the judgement of the Appeal Court by relisting SPN and other political parties.
“We demand immediate release of all arrested, public apology from the police and payment of medical bills and other damages to those arrested.  The unjust arrest today again reveals the despotic character of the Buhari/APC government and further betrays its anti-democratic and anti-masses character. While the government is launching attacks on economic rights of the working and poor people, it, at the same time, wants to deny them democratic rights to express their minds.”
The group said the arrest exposes the “desperate attempt” of the Nigerian ruling class to ensure Nigerians are shortchanged and denied of political voices.
“Obviously, the Buhari government knows that its rule is no more popular, given serial attacks on the living conditions of the people, mismanagement of the economy, and massive corruption going on in the government. It has thus resorted to brute force to sustain its rule. If the Buhari government is allowed to get away with these undemocratic conducts, it will be emboldened to turn to full-fledge totalitarian regime.
“For us, the right to peaceful protest is guaranteed by the Nigerian constitution, as clearly captured in Section 40 of the Nigerian constitution. This is why the arrest of members of our party and journalists is criminal, unjust and undemocratic. It shows the level of disregard for fundamental human rights by the APC/Buhari adminstration.
“We in the Socialist Party of Nigeria (SPN) reiterate our rejection of the inhumane increase in fuel price and the hike in price of tariff. This sad development further shows that a system designed to meet the profit interest of the few over the wellbeing of the vast majority is incompatible with human development. We join Nigerians to reject this vicious anti-people policy of increments in fuel price and electricity tariff and the horrific condition that the ruling class has thrown the country into.
“The Socialist Party of Nigeria (SPN), demands an end to all attacks on democratic rights by the Buhari/APC government. We also call on the leadership of Nigeria Labour Congress (NLC) and the Trade Union Congress (TUC) to wake up from their slumber and begin to mobilise the working masses of Nigeria against the anti-people policies of the APC/Buhari administration. This is the best way to stop the Buhari/APC government from further attacks on the working and poor people.”