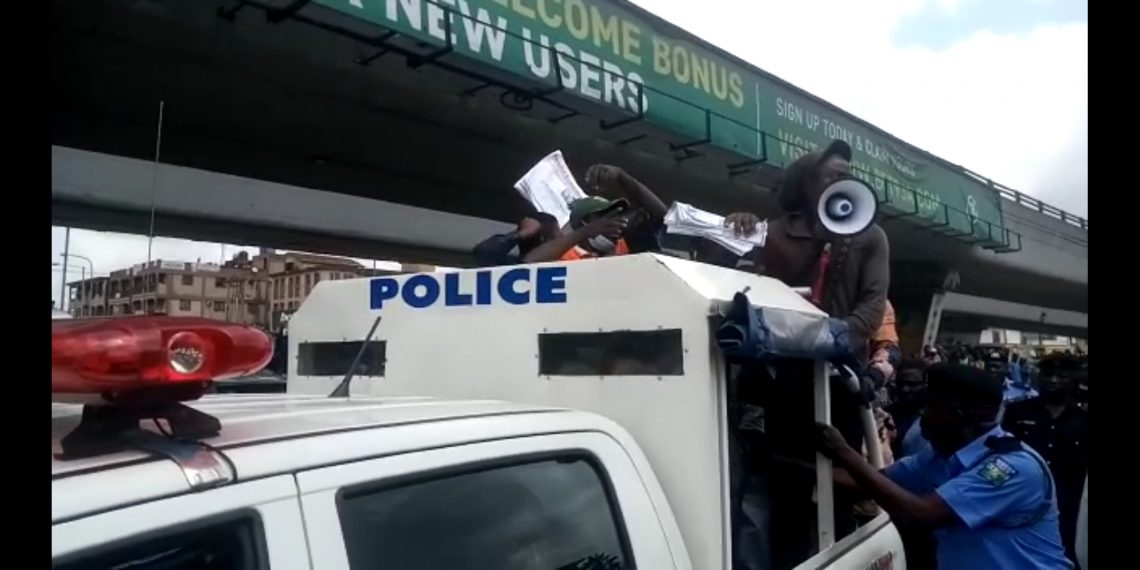 The police in Lagos have arrested 14 protesters who were marching in Lagos in protest against the deregistration of political parties and increase in fuel price and electricity tariff.

Four journalists, who were covering the protest, were also arrested and taken to the state police command in Ikeja.

The protest was organised by the Socialist Party of Nigeria; the group is demanding a reversal in the actions of the government.

The arrested journalists are Ifeoluwa Adediran of PREMIUM TIMES, Abiodun Ayeoba of Sahara Reporters; Awoniyi Oluwatosin of ObjecTV media, and Daniel Tanimu of Galaxy TV whose camera was seized.

Some of the journalists’ phones were also seized, PREMIUM TIMES learnt.

In its reaction, the Joint Action Front condemned the arrests and demanded the release of the protesters unconditionally.

“The attention of the Joint Action Front (JAF) has just been drawn to the illegal arrest of several comrades of the Socialist Party of Nigeria (SPN) by police and security operatives of the Area C Command. Journalists who were covering the event were also arrested alongside the leaders and members of the Socialist Party of Nigeria (SPN) for protesting this morning against fuel price hike, electricity tariff and the deregistration of SPN,” Abiodun Aremu, the JAF secretary, said in the statement.

“The arrested include Comrades Ayo Ademiluyi, Duro, Engels, Davinovich and several others.

“JAF hereby demands the immediate and unconditional release of all the arrested comrades and the journalists who did no wrong exercising their legitimate and constitutional rights of expression and protest.”