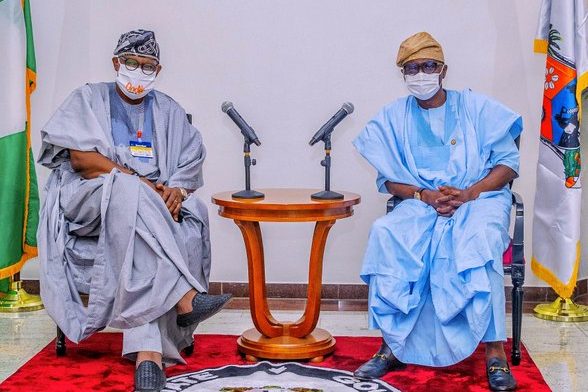 The All Progressives Congress (APC) has inaugurated a 104-member national campaign council, headed by Gov. Babajide Sanwo-Olu of Lagos State, for the Oct. 10 governorship election in Ondo State.

The APC Caretaker Committee Chairman, Gov. Mala Buni of Yobe, inaugurated the campaign council on Saturday at the party’s secretariat in Abuja.

The council has Gov. Simon Lalong of Plateau as Deputy Chairman, while Mr Mustapha Salihu will serve as Secretary.

Mr Buni urged the campaign council to ensure the renewal of the mandate given to the party’s candidate in the state Gov. Rotimi Akeredolu, four years ago.

“I am happy to state that the chairman and members of the council were carefully selected, based on their personal records of hard work, proven integrity and commitment to the ideals of our dear party.

“I have no doubt in my mind that the rich cream of personalities on this council, with vast electioneering experience, will once again secure the mandate of the people of Ondo State, for the party and its candidate,” he said.

According to him, the party and its supporters across the country have enormous confidence in the ability of the council members to succeed.

“You are, therefore, encouraged to always engage in team work and collective participation. We are fully confident that by the grace of God, you will succeed and do us proud.

“Let me use this occasion to assure the good people of Ondo state that your investment in the party in this election will consolidate the achievements recorded in the last four years.

“I want to assure you that APC will not renege in its drive to build a peaceful and prosperous Ondo State that will be the pride of all,” Buni said.

He urged supporters of APC in the state and all over the country to be law-abiding before, during and after the election.

According to him, members of the party should engage in healthy competition and promote robust electoral campaign and politics, generally.

Responding, Mr Sanwo-Olu thanked the Buni-led caretaker committee for giving members of the council opportunity to serve the party.

He described a large number of members in the council as a reflection of the people’s genuine desire to serve the party.

The Lagos state governor expressed optimism that the council would ensure the return of Mr Akeredolu as governor of Ondo state.

“We will ensure that we campaign to the people of Ondo state to see the need to continue with the progressive government that they have.

“Gov. Akeredolu is doing very well; we have seen it. He still has the capacity; he has the energy to further advance what he is currently doing.

“So, that is why we are with him and we know he will do that,” Mr Sanwo-Olu said. (NAN)