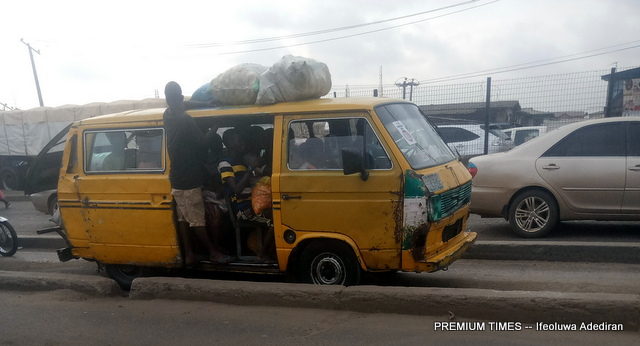 Many commercial buses in Lagos have returned to carrying full-capacity, as against the directive of the state government that all commercial busies should load a maximum of 60 per cent of their capacity.

Several buses observed by PREMIUM TIMES along Ikorodu road loaded full capacity, The only ones who still adhere to the government’s COVID-19 protocol are those that load their passengers from the motor parks.

In May, Governor Babajide Sanwo-Olu announced the guidelines for the partial easing of lockdown in the state, part of which was that commercial buses should not load more than 60 per cent of the bus capacity.

On Saturday, the governor announced further measures to ease the lockdown including the planned reopening of worship places and extension of business hours; but he was silent on public transportation.

Over the past few weeks, PREMIUM TIMES observed how many commercial buses in the state, including the government-partnered buses such as those owned by Primero Services Limited, popularly called BRT, have returned to loading full capacity.

“Do they expect us to continue loading half of the bus? How are we to make a profit? You should also put yourself in our condition, we pay for fuel, bus maintenance and still pay dues at every bus-stop, including some monies paid to police officers and LASTMA officers,” a bus driver said.

During a recent trip in a public bus, disgruntled passengers were grumbling about how they are the receiving end of the decisions of the government and commercial bus drivers, without any succour from employers and the government.

Several Lagosians who commute to their various workplaces using public transport have been subjected to hardship since the ease of lockdown in Lagos.

Following the announcement by the state government that commercial buses should load a maximum of 60 per cent capacity, bus fares in Lagos doubled.

Amidst the increase in the cost of transportation in the state, many income earners lamented on how they have witnessed a pay cut which has drastically impacted their livelihoods.

We can no longer cope – Danfo Drivers

Some bus drivers who spoke to PREMIUM TIMES explained how the commercial transport business is becoming unbearable due to the effect of COVID-19.

Highlighting the impacts of COVID-19 on their business, the drivers said their expenses remain largely the same while income is dwindling.

Taofeek Ajayi, a driver on Lagos-Ikorodu road, explained how drivers struggle to make a profit because the loading capacity has decreased.

“What makes the matter worse is that those boys that collect money at parks are collecting higher because they feel we are now making more money.

“Truth be told, we are suffering losses. Imagine the distance we used to carry N300 before COVID, we are carrying it N500 now but with two passengers, that means we are losing about N800 per trip and those useless boys and even the police will still collect their money,” he said.

Another bus driver, Ogochukwu Emmanuel, said the government can no longer compel them to carry two passengers on a seat because even government buses load full capacity but do not allow standing.

“Do you see that government BRT? They load full passengers, now they want to increase their fares and will still be loading full passengers, which is to tell you that they are also experiencing losses. What of us that are driving on hire purchase or will make a delivery every week?”

“We are buying fuel, paying for the maintenance and buying expense foodstuffs like every other normal people are buying, it is difficult to keep up with the loading capacity,” Mr Emmanuel said.

Officials of the National Union of Road Transport Workers (NURTW) who spoke to PREMIUM TIMES at various parks insisted they still comply with the directive of the government.

“As you can see, buses from this park load two passengers on a seat and one at the front seat. Not in this park will any driver load more than that,” Abidoye Yusuff at Ojota Park, said.

“The problem is that we have bad eggs among us, but in our parks, they obey rule and order. When they get out of the parks, some of them behave like goats,” he added.

We have no choice – Commuters

Disgruntled commuters who pay high bus fares and are still made to cluster with other passengers expressed their helplessness in the situation they have found themselves.

Mercy Ojo, a commuter, said she gets bitter whenever she has to squeeze herself with other passengers in the bus, but she has no option.

“It is so sad that even the government that makes the rules cannot keep them. Whenever you disagree with conductors and passengers not to carry more than the required number of passengers, they tell you to get down from their vehicle.

“This is Lagos, even if you get down from the bus before you will get another bus to carry you is another one hour and that next bus might even carry full passengers. So, you say to yourself, what’s the point.

“There is no option than to stay put. If you don’t have a car of your own, you have no choice in Lagos,” she said.

Olawale Ahmed, another commuter, said the population of Lagos makes the law impossible to enforce.

“Before COVID, people were always stranded at bus-stops, not to talk of this COVID era when things have become worse. After waiting at the bus stop for almost an hour before getting a bus, you won’t even care whether the bus had excess passengers in it or not,” he said.

Mr Ahmed said the law enforcement agents are also not helping matters as many of them enter buses without paying, and drivers find ways of making up for the losses.

He said the police is on the lookout for defaulters and will also, arrest passengers of “jampacked vehicles.”

“The Commissioner of Police had a meeting with the regulators of quite a number of those companies and parks to re-emphasise the existing laws.

“Enforcing COVID-19 laws is quite different from enforcing normal laws, it requires a lot of collaboration and support of the people. You also need to make them understand fully why the laws are in place,” he said.

Mr Elkana said part of the reasons for the meeting is to tell regulators and leaders of commercial buses the observation of the police on how their members, who were complying with COVID-19 laws are now relapsing.

“How we got it done is working closely with those unions, they also have their task force that works with the police to enforce the guidelines on their members.”

Mr Elkana said the police are working closely with park managers and the NURTW taskforce to enforce maximum loading capacity.

“The second part also is sending a strong message to passengers themselves not to enter jampacked vehicles, we will not only arrest the drivers, but we will also arrest the passengers,” Mr Elkana said.

China Loan: Nigeria will pay back in 20 years – Amaechi