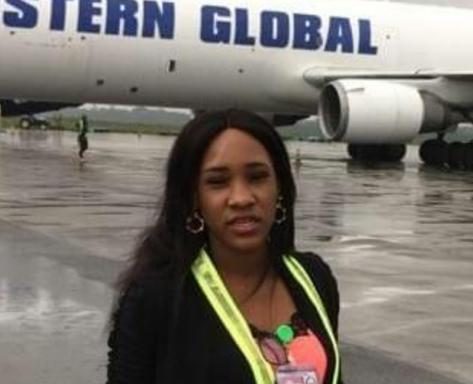 Chidinma Ajoku, a worker at FAAN killed by a container

The bereaved mother of a 27-year-old woman who was killed in an accident at Ilasamaja bus-stop, inward Mile 2 area of Lagos has called on the Lagos police to investigate the matter and arrest the suspects.

Chidinma Ajoku, a staffer of the Federal Airports Authority of Nigeria (FAAN), was killed alongside her male colleague when a container fell on July 26.

The Lagos State Emergency Management Agency (LASEMA) described the accident as ‘an avoidable accident’ given that reckless driving of the truck driver led to its attached 20ft container falling on a commercial bus.

The truck fell on the commercial bus while discharging passengers at Ilasamaja bus-stop, leading to the death of two, while three others sustained injuries.

Giving update on the accident, Nosa Okunbor, LASEMA spokesperson said six passengers were rescued and given medical attention, while two died on the spot.

“The accident occurred due to collision of a truck with registration number SGM 715 XA loaded with a 20ft container when it rammed into a commercial bus stationed at Ilasamaja bus stop under bridge while it was discharging some of its passengers,” he said.

According to information generated by LRT on arrival at the scene of the incident, “insistence on right of way by driver of the truck laden with another one, led to the unfortunate incident, where the said truck with registration number SGM 715 XA, rammed into the commercial bus,” LASEMA said.

Mr Okunbor said the case was handed over to the Ilasa police fivision, while the rescued passengers were transported to Isolo General Hospital by officers from the division.

Chineze Ajoku, the mother of the deceased female passenger has called on the government and the Lagos State Police command to arrest the truck driver and get justice for the deceased.

“That Sunday, I waited and waited the whole night up till 2 a.m. waiting for her to come back from work. I was calling her aunty where she was staying in Surulere,” she said.

“Both of us did not sleep till it was 6 a.m. when a colleague called and told me that she was involved in an accident and they are at Isolo General Hospital.”

The bereaved mother said when they got to the hospital, her daughter was not among the patients taken to Isolo “but they were referred to Yaba General Hospital where her daughter and her colleague were found at the morgue.”

“This is getting too much, these containers keep on killing people and nobody talks,” she said.

Mrs Ajoku described her daughter as someone with a promising future but life was snuffed out of her by a reckless truck driver.

“Everybody in this Lagos, whether you have a car or enter a bus or drive your own car, all of us, our lives are in danger. Because we encounter all these containers everyday and they are very reckless.”

She called for support from Nigerians to put an end to the loss of lives caused by truck drivers.

Mrs Ajoku also said the police have not been able to trace or arrest the truck driver.

“The trailer that fell on the bus and killed these persons is impounded in our police station, not that the trailer is gone, only the driver that escaped.

“Whoever is the owner must definitely come around, but unfortunately, there is no registration number on it. But we are also trying to find out which particular company owns the trailer and get the driver arrested.

“It is not that nothing is done, it is not true, maybe they (victim’s family) are talking to another division. Police responded when it happened and took injured persons together with other emergency responders to the hospital,” Mr Elkana told PREMIUM TIMES.

The superintendent of police said the trailer is in custody and investigation is ongoing.

‘How Nigeria can ensure food security amidst economic crisis’