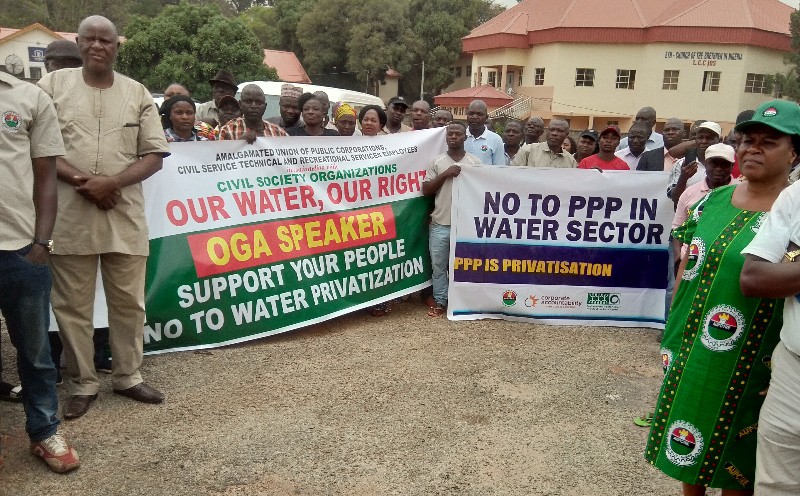 The lack of potable water in many Lagos homes could jeopardise the state government’s fight against the coronavirus pandemic, a civil society organisation, Corporate Accountability and Public Participation Africa (CAPPA), has warned.

During a press conference in Lagos Tuesday, the group called on the Lagos State Government to declare a state of emergency on the water sector.

The Executive Director of CAPPA, Akinbode Oluwafemi, said despite the fight against COVID-19 by the state government, no attention is paid to the supply of water, which is at the centre of the fight.

“Water is a fundamental human right and it is important the government takes it as such. The state did not include provision of water as part of the COVID-19 response strategy. In fact, what we saw was a decline in water production during the pandemic,” he said.

Mr Oluwafemi said a recent report on the status of the waterworks in Lagos in response to the state government’s public service campaign asking residents to wash their hands regularly to curb the spread of the COVID-19, has revealed further shortfalls in the water sector.

As of July 13, there are 12,583 coronavirus cases in Lagos and 172 deaths, according to the Nigeria Centre for Disease Control.

The report noted that many waterworks in Lagos are non-functional, denying Lagosians access to clean and safe water even amidst the pandemic.

“When the Lagos State Government commenced its public service announcement on the need for citizens to regularly wash their hands with clean water, it was necessary to complement their efforts by ascertaining the true state of infrastructure that would deliver on that mandate. Unfortunately, the findings were very disturbing“

“Not only did we discover that many of the waterworks were performing abysmally below capacity, at the time of the most crucial need for residents, most were practically on lock down.”

Mr Oluwafemi said some of the reasons why the waterworks were performing abysmally include faulty engines, irregular power supply and lack of manpower among others.

“Shasha waterworks in Alimosho – the most populated local government in Lagos had not functioned for upwards of seven years. Infrastructure at the Badagry waterworks have started crumbling and the premises taken over by weeds. Only at the Lekki waterworks which services highbrow customers did the team learn that production was more regular especially when there is power.”

CAPPA urged the Lagos State government to jettison its planned privatisation of the water sector and declare a state of emergency in the sector.

It also urged the state government to fully uphold the human right to water as an obligation of the government, representing the people.

Mr Oluwafemi recommended that the state government should build the political will to prioritize water for citizens, leading to a comprehensive plan that invests in water infrastructure necessary to provide universal access, jobs, improved public health, and invigoration of the Lagos economy.

The group called for the institution of a probe into the N1.6 billion released for rehabilitation of the 48 mini and micro waterworks under the administration of the former governor, Akinwunmi Ambode, and all water contracts in the state since 1999.

Mr Oluwafemi said there is no account for the released fund, despite the claim of the state government that it was spent on water rehabilitation as there is no improvement in the supply of water in the state.

Speaking at the conference, Funmi Sessi, the chairperson of the Nigerian Labour Congress, Lagos chapter said it is worrisome that a state filled with water lags basic water supply for the populace.

“Water is essential in the fight against COVID-19. How many homes in the state have links to constant supply of water by the government?”

Mrs Sessi said there is a need to block corruption and wastages in the water sector and channel public funds to amenities that will better the lives of the people.

“There is water everywhere in Lagos but none to drink and use by the people. No water, no soap in public facilities provided by the government to combat COVID-19,” she said.

The Union leader urged the government to pay urgent attention to the supply of water to its citizens.

Achike Chude, the Vice-Chairman of Joint Action Force, said the water infrastructure in Nigeria is so bad that Nigerians are getting used to the fact that there is no water and they are carrying on their lives.

He said citizens should awaken to the consciousness that water is one of the most basic infrastructure that the government should provide for the populace.

“Lagos State Government seem to be doing a lot in terms of combating COVID-19 but in the actual sense, the state and populace lack access to water which is a key part in fighting the pandemic.

“Government at the state and federal level do not see water as a priority, which is why they fail to address the supply of water even amidst the sensitization of good hand and personal hygiene as a way of combating the pandemic,” Mr Chude said.

He encouraged citizens to begin to move away from the normalisation of absence of water and make the supply of water a priority for the government.