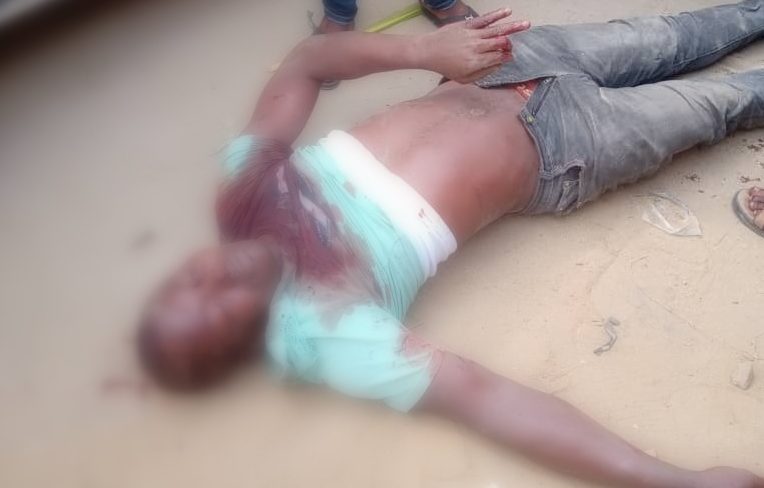 The police in Lagos have arrested the chairman of motorcycle riders association in Ajah, Idowu Yusuf, over the murder of Stephen Ojatunwashe, a 37-year old contractor.

Mr Ojatunwashe was killed on May 30 at General Paint, Ajah, following a tussle between motorcycle and tricycle riders in the area.

Mukaila Arowolo, a friend to the deceased, who witnessed the incident said they were attacked by four armed men at a place called General Paint. He said the men aimed at the late Mr Ojatunwashe after shooting in the air to disperse the crowd.

“It was in the evening, around 6 p.m., four guys came on motorcycle to where we were, they were with cutlass and guns and started shooting. People around started running and they came to where we were and shot Stephen and cut him with a machete,” he narrated to PREMIUM TIMES.

Mr Arowolo said after the killing of his friend, he reported the case at Ogombo police station, Ajah.

According to him, the deceased and himself worked as contractors and supplied gravel, sand, granite and other building materials to Lekki Atlantic Gardens Estate, Lekki-Lagos.

“I have ten tricycles and we agreed to supply tricycles to the estate. Later, we got to know that the Okada riders (commercial motorcyclists) and their chairman in the area were unhappy about the development.

“It was the Okada chairman, Idowu, that arranged boys to kill Stephen, they are also after my life,” he alleged.

Mr Arowolo said that he could not see the faces of the alleged killers because they wore caps and face masks, but since he knew the suspected mastermind, he gave the information to the police.

“I gave the police the name and picture of the suspect, but instead, I started receiving strange calls threatening to kill me,” Mr Arowolo said.

Gbajobi Adewale, the Chairperson of Lekki Atlantic Gardens Estate, told PREMIUM TIMES that the deceased and a resident of the estate approached him on their plans to introduce Keke Napep (commercial tricycles) in the estate.

“They came to me that since they have banned Keke Napep from the express, they want to start working in the estate and if we buy the idea, they can go ahead.

“I told them because I know fight will definitely happen, as it happens everywhere. You know where you have Okada and you now bring Keke because the passengers will reduce, I told them to meet the Okada people and do their operational formula,” he said.

Mr Adewale said he was later briefed that they had discussed with the motorcycle union and they had settled. He said the estate welcomed the development.

“It was later I learnt that the first day they wanted to start operations, there was a serious fight at General Paint and that Okada people chased the Marwa guys (tricycle riders).”

The estate chairperson said after a series of arguments and fights, he decided that tricycle would no longer operate. He said the decision came after the intervention of a military officer in the estate who also opposed the use of tricycles.

“I didn’t know whether the fight was still going underground. It was later I learnt they they shot (the deceased) and he was killed,” Mr Adewale said.

When PREMIUM TIMES contacted Moses Beleyede, the police officer who was said to be in charge of the case, he denied knowledge of the matter.

“I don’t know about the case, I have no case of Stephen Ojatunwashe with me. If it is a case of murder, I don’t investigate murder, you can come to our station to talk to the DPO,” he said.

Mr Arowolo, the witness, had earlier told PREMIUM TIMES that Mr Beleyede had all the information about the case and that he was the officer that issued a letter to enable him bury his friend.

But Mr Beleyede denied being privy to the case.

When PREMIUM TIMES contacted John Amubieya, the Divisional Police Officer of Ogombo station, he requested time to find out about the case.

“It is only two cases of people falling and dying that I am aware of and we couldn’t send our men there due to COVID-19 suspicion. We don’t have all the kit required, so we gave the family a letter to bury the dead.”

Mr Amubieya said if he was aware of a case of murder, his officers would have been drafted to the scene.

Later, the DPO informed PREMIUM TIMES that the suspects had been identified by the witness and case is being investigated at the State Criminal Investigation Department, Yaba.

When contacted, Bala Elkana, the Lagos police spokesperson, said the case must be one of the many cases he receives daily.

“Since you have spoken to the DPO, definitely a case of murder will not be handled by him, it will be forwarded to Panti.

“All cases of murder, capital cases move to the State CID, that is the procedure,” he said.