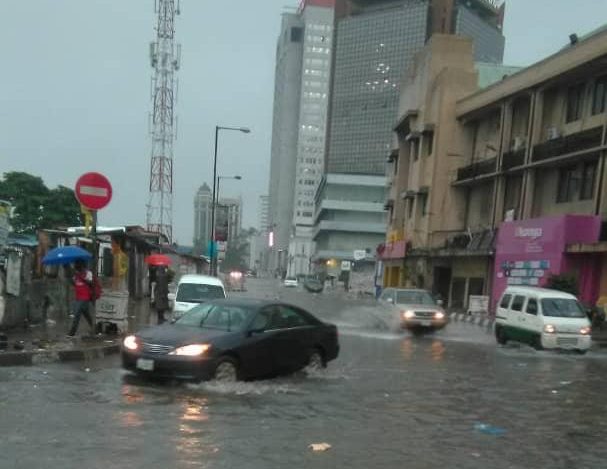 There were traffic gridlocks on major highways and destruction of properties, including a building collapse at Iyana Ipaja, a Lagos suburb.

The rain also forced many residents to stay indoors.

At Iyana Oworo, the submerged road caused vehicular traffic to stretch all the way back to Alausa, a more than 10-kilometre distance.

Residents and commuters took to various social media to share their ordeal.

In a video shared by a Twitter user, the flood took over Iyana Oworo inwards Third mainland Bridge, leaving several vehicles stuck in the water.

On Ikorodu road, vehicles were stuck in a heavy traffic gridlock with little or no movement for several hours.

At Iyana Ipaja, a one storey building housing eight rooms and 23 shops collapsed during the downpour.

In a statement by Femi Oke-Osanyintolu, the Director-General of the Lagos State Emergency Management Agency (LASEMA), he said the adjoining fence to the staircase of the building collapsed, leading to the partial collapse of the building.

When PREMIUM TIMES contacted Nosa Okunbor, the spokesperson of the LASEMA, he said an update would be given on the state of flood in some areas of the state.