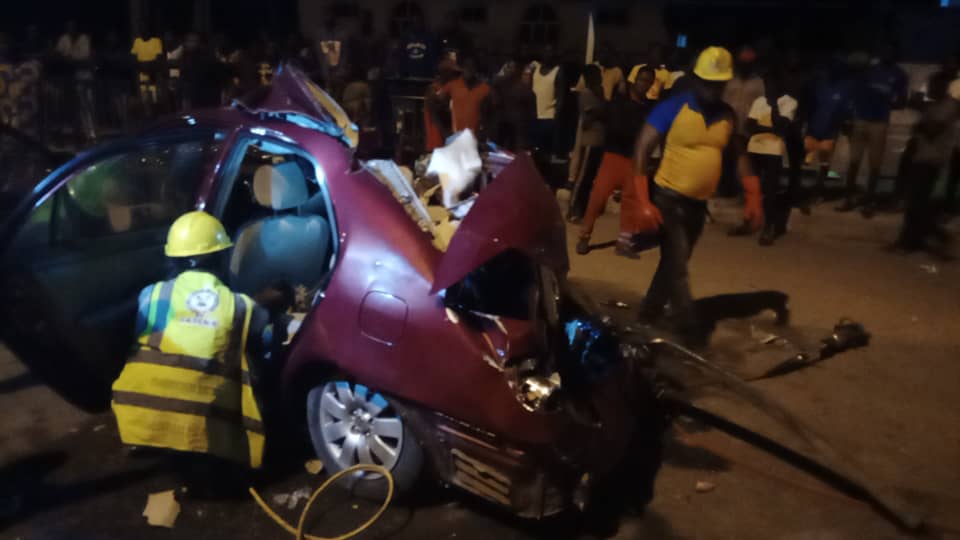 The Corolla Car involved in a hit-and- run accident

A yet-to-be-identified man has died in an accident at Ikota, along Lekki-Epe Expressway, Lagos, while two adults were severely injured in the accident, the Lagos State Emergency Management Agency (LASEMA) has said.

Nosa Okunbor, the spokesperson of the agency, said the accident involved a Toyota Corolla car, with registration number FJK 353 GC and an unidentified hit-and-run truck which reportedly rammed into the car from behind.

The Toyota Corolla was said to have rammed into a roadside culvert due to the impact of the collision, leading to the death of the adult male driver/owner and the critical injuries sustained by the other two adult males.

According to Mr Okunbor, a preliminary report on the accident showed that, “Upon arrival at the incident scene, it was observed that a wine colored Toyota Corolla car with registration no. FJK-353GC was involved a Road Traffic Collision.

“Investigation carried out at the scene revealed that while the Toyota car was on motion, an unidentified Truck ran into it from behind.

“Upon this impacts, the Toyota car rammed into the roadside culvert. The unidentified truck fled the scene immediately the incident occurred.

“An adult male lost his life as a result of the incident and 2 adult males reportedly taken rushed to the hospital before the arrival of responders to the scene.

“The car has been recovered to a nearby layby whilst the fatality has been extricated with aid of the Light Rescue Equipments and bagged as the LASEMA Response Team awaits SEHMU for transfer of the commodity to the morgue.”

Mr Okunbor said the accident scene has been cleared of to curtail any secondary incident.

PREMIUM TIMES earlier reported how an officer of the Nigerian Police Force was killed in a hit-and-run accident at Marwa, along Lekki-Epe expressway.

The unidentified driver was said to have fled the scene immediately the accident occurred, leaving the body of the deceased officer.