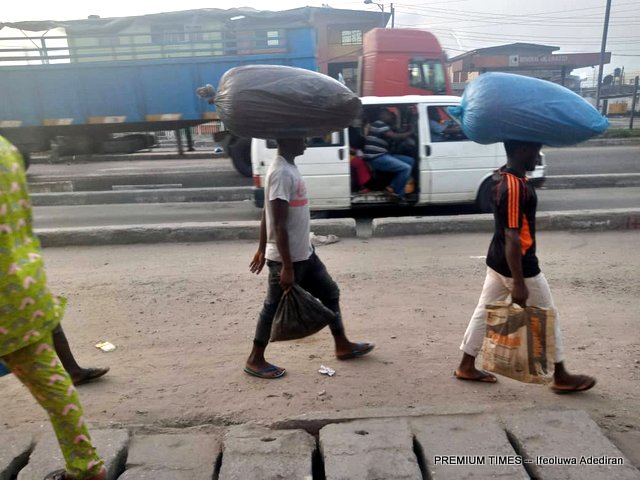 Commuter buses undertaking intra- and inter-state trips in Lagos have continued to ply their business in defiance of the federal government’s lockdown order, PREMIUM TIMES can report.

This newspaper’s checks showed that commercial buses (popularly known as Danfo) are still plying such routes as Ojota-Yaba, CMS-Ajah, and Mile 2-Oshodi among others.

The bus drivers usually drive through streets to evade the checkpoints on major roads. In some cases, they part with a sum of money at police checkpoints to continue their journey.

PREMIUM TIMES also observed that owners of private vehicles are also part of the scramble for passengers with many of them squeezing as many as seven persons into their cars.

“We see buses or cars most times, they carry passengers very early in the morning and late in the evening. They are not many on the road, so they charge us higher prices,” said Yusuf Olatunde, who lives at Irawo area and works as an attendant at a filling station on Ikorodu road.

On Monday, Adetoun Onajobi, an activist, shared a video on social media where she accosted a police officer conveying about 11 persons in a Hilux van.

Ms Onajobi, who claimed to be on a “special security check”, said she saw three police officers conveying passengers from Berger, in Lagos, to Mowe, in Ogun.

“Law enforcement agents shouldn’t break the laws while several families are locked up without hope for the next meal,” she said in a Tweet.

The police spokesperson in Lagos, Bala Elkana, did not respond to calls for comment or reply text messages.

“Many people just know they were told to stay at home, they do not know why, they are moving around carelessly,” she said.

She urged the government to make available information about the spread of the virus to local communities, especially people without access to mobile phones or social media.

A two-minute video recorded and sent to PREMIUM TIMES by Ismail Ibrahim, a lecturer at the Department of Mass Communication, University of Lagos, showed commercial tricycles and buses at the Agric area of Ikorodu carrying on with their usual business.

A civil society group, the Rule of Law and Accountability Advocacy Centre (RULAAC), in a statement to PREMIUM TIMES, accused some commercial transport companies in Lagos of defying the government’s directive restricting inter-state travels.

“The transport companies choose to make brisk money and expose other law-abiding Nigerian citizens and residents to the risk of infection and wider spread of the ravaging disease,” he said.

“Police officers, who ought to enforce the no-movement order, instead also exploit the opportunity to make their own money.”

A passenger, who travelled last weekend from Lagos to Owerri, told PREMIUM TIMES he took a night bus and paid N12,000.

“I met a driver of one of the transport companies’ office and he said I can see bus at night, at 9 p.m.,” said the passenger who identified himself as Peter.

He added that he made his trip in an unmarked Toyota Sienna.