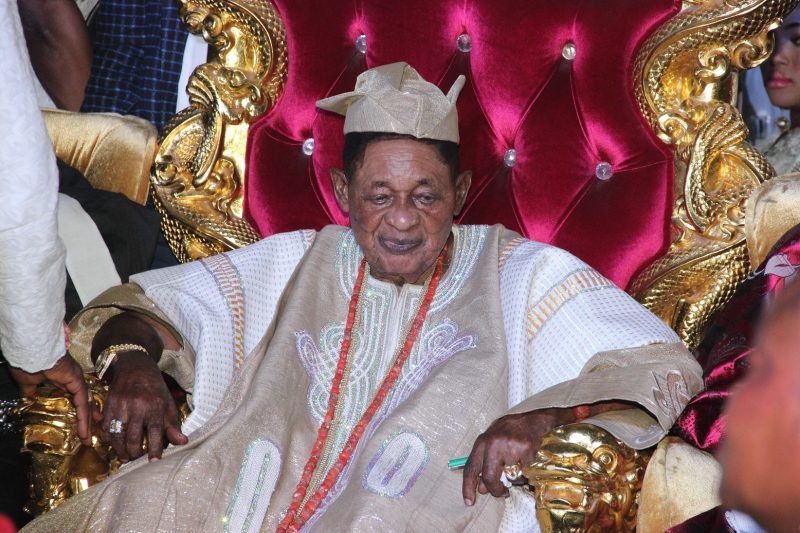 Alaafin of Oyo writes Fayemi over sanction of Ekiti monarchs

The Alaafin of Oyo, Lamidi Adeyemi, has written to the Ekiti State Governor Kayode Fayemi, over a recent query sent to 16 monarchs in the state.

PREMIUM TIMES reported how the state government issued “administrative letters” to no fewer than 11 first-class traditional rulers over alleged non-cooperation with government and leadership of the state traditional council.

The memo titled “Re-Absence from State Functions and Council of Traditional Rulers’ Monthly Meetings,” was issued to the affected monarchs, late on Wednesday. They were given 72 hours to explain themselves.

The letter accused the monarchs of refusing to make themselves available at both state functions as well as monthly meetings of the State Council of Traditional Rulers, for about eight months, since August 2019.

The letter was signed on behalf of the government by the Permanent Secretary, Bureau of Chieftaincy Affairs, A. O. Adeoye.

The three-paragraph letter, addressed to each traditional ruler, reads: “It has come to the attention of Mr Governor that Your Royal Majesty has not been attending the monthly statutory meetings of the State Council of Traditional Rulers and state official functions since August 2019.

“Your conspicuous absence at the council meetings and state official functions, without any excuse or justification is considered inimical to the proper administration of the chieftaincy institution you represent.

“Therefore, Mr Governor has directed that Your Royal Majesty should forward your representation for this inaction, through this office within 72 hours on the receipt of this letter.”

The cold war between the affected traditional rulers and the governor started about eight months ago when the governor appointed the Alawe of Ilawe Ekiti, Ajibade Alabi, as the new Chairman of the State Council of Traditional Rulers.

The development did not go down well with the affected rulers, who considered the appointee junior to them and not deserving of the office.

The group of traditional rulers, in showing their grievance, challenged the appointment in court and also vowed not to cooperate or attend any meeting or function where the appointee is present or presides.

Meanwhile, Governor Kayode Fayemi, on Thursday, said he had no plans to dethrone any of the traditional rulers served with administrative letters.

He said it was a mere “administrative letter”, and not a query, to explain why they had continually absented themselves from state functions and Traditional Rulers Council meetings within 72 hours.

The Alaafin in his letter dated March 12, warned the state government to desist from meddling into the affairs of the traditional rulers.

He said he was writing on behalf of seven paramount royal fathers in Yoruba land.

“Specifically, this is in respect of the composition of the Council of Obas and Chiefs in the State. Let me start by saying that the sacrosanct of Pelupelu that grades the sixteen Crowned Obas in Ekiti Land is not in doubt. Suffice to say Your Excellency that in any human society and more so in Yoruba Land, order of hierarchy and seniority are of vital consideration in position placement.”

In the copy of the letter obtained by PREMIUM TIMES newspaper, Mr Adeyemi condemned the composition of the Council of Obas and Chiefs in the state.

“From time immemorial, Obaship Leadership in Ekiti Land had been within the sixteen Obas without any dispute or quarrel among them and indeed to the admiration of other Yoruba Kingdoms.”

“It is on this basis that we will advise against any attempt to treat traditional institutions in Yoruba Land with levity and to avoid any attempt of importing any sub-culture of traditional degradation into Yoruba Land,” the letter read in parts.

The Oyo monarch also noted that the actions of Mr Fayemi amount to subjudice since the matter is pending before a court.

“Since the case is still in court, we will not want to comment further on it as a law abiding citizen. I, however, expected that your Excellency waits till the end of the court process before acting on the matter,”

“Finally, as fathers, we should like to advise Your Excellency to tread softly any relationship with Traditional Institution in the name of Oduduwa and our other Ancestors in Yoruba Land. Let us employ diplomacy to settle this issue. We have the mechanism of conflict resolution in ways of our ancestors,” the Oyo monarch concluded.