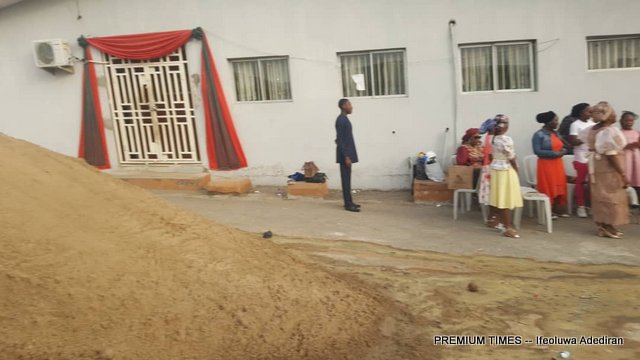 Lagos residents, Redeemed Church at loggerheads over use of community hall

The residents of MKO Abiola Estate in Lagos are at loggerheads with the Agape Area Headquarters of The Redeemed Christian Church of God over the church’s refusal to vacate the community hall within the estate.

Last year, the residents took the church before an Ebute-Meta magistrate court seeking an injunction to stop the church from use of their community hall.

The case was, however, withdrawn after plaintiffs noticed a defect in their case filing.

Adetokunbo Shittu, the president of the estate, told PREMIUM TIMES that the community hall was given to the church on a rent agreement in 1999.

But, according to her, the church has taken total control of the hall, refusing to allow the residents of the estate use it for other purposes.

The hall was originally used by Israel Assembly of the church in 1999, before they got a permanent space behind the estate and transferred the use to another Redeemed Church, the Agape Parish.

“Since 2017, we have been giving them quit notice, but they have refused to vacate. It is a community hall, not a church,” Mrs Adetokunbo said.

“We increased the rent to ₦2 million but when we found out that the people were not ready to leave and we are in desperate need of the space, we took the case to the court.”

Before the case was taken to court in 2018, the estate executives served Agape Parish, RCCG three quit notices, one in 2017 and two in 2018.

The estate president said the lawyer who represented the estate in the suit made technical errors which led to the withdrawal of the case in April 2019.

“We gave them another quit notice for six months, that expired in November 2019, we thereafter gave them seven days mandatory notice to leave the place which they have refused.”

Mrs Adetokunbo said the hall is locked most of the week and is only opened when the church wants to use it.

“During summertime, our children have nowhere to go, there is no venue for skill acquisition. If we have meetings, we do them outside during rain or sunshine,” she said.

“No form of event, training or meeting can be done at the community hall, the church takes absolute control of the hall and its premises.”

Some time ago, the Lagos State Ministry of Physical Planning and Urban Development sealed off the residents’ estate office due to visible cracks on the walls of the building. Mrs Adetokunbo said their executives met with the church leadership to release one of the rooms in the community hall for their use pending the resolution of their matter with the government.

The church refused, according to her.

“There are three rooms in the hall, we told them to give us one to be used as our office, which they refused. We only gave them the hall to use and not the rooms,” Mrs Adetokunbo said.

“The agreement is that of a landlord and tenant, it should be such a way that anyone can come to use it once they pay. Residents too should be able to hold meetings, training and seminars in the hall,” she added.

When contacted, Sesan Oyebode, the Area Pastor of Agape Parish at MKO Abiola Estate told PREMIUM TIMES that the church represents the interests of members of the estate who see it as their chapel.

“RCCG was a pioneering church in the estate. The church took (rented) many shops, including the community hall. That is where RCCG has been for the past 21 years,” he said.

Mr Oyebode justified the church’s locking of the community hall for most of the week.

“We are paying rent not as per use or to use as an event centre,” he said.

“If you operate a church in an event centre, someone can do a birthday party or wedding reception afterwards but nothing as that has ever been done. That is the way the church (community hall) has been used since inception and there is nothing in writing that says that is how it should be used.”

Mr Oyebode said due to the decision of the estate exco to evict the church from the community hall, the Christian community of the estate wrote a petition to the governor to allocate a piece of land to them. The petition was signed by 57 members of the Redeemed Church who argued that the Muslims in the estate had been given a place of worship.

The state government thereafter allocated a piece of land in the estate to the Christian Association of Nigeria (CAN).

Mrs Adetokunbo told PREMIUM TIMES the land was meant to be occupied by an interdenominational church, so all Christians living in the estate would benefit from it.

But Mr Oyebode accused the estate exco of denying them access to the land.

“CAN got the land on behalf of RCCG, the understanding is that CAN will give its land to one of its members that has a pioneering role in the estate, running the church from inception,” he said.

“The estate has, however, refused to allow CAN sell the land to us. ₦10.5 million was put as a price for the land, we are ready to pay the price but the estate executive said the land can only be sold to an interdenominational body and not RCCG.”

On January 4, the estate exco locked the community hall in a bid to retrieve it from the church. But it was forced open by the church the next day in order to hold their first thanksgiving service for the year.

Inside details of UBA’s rightsizing exercise affecting hundreds of staff