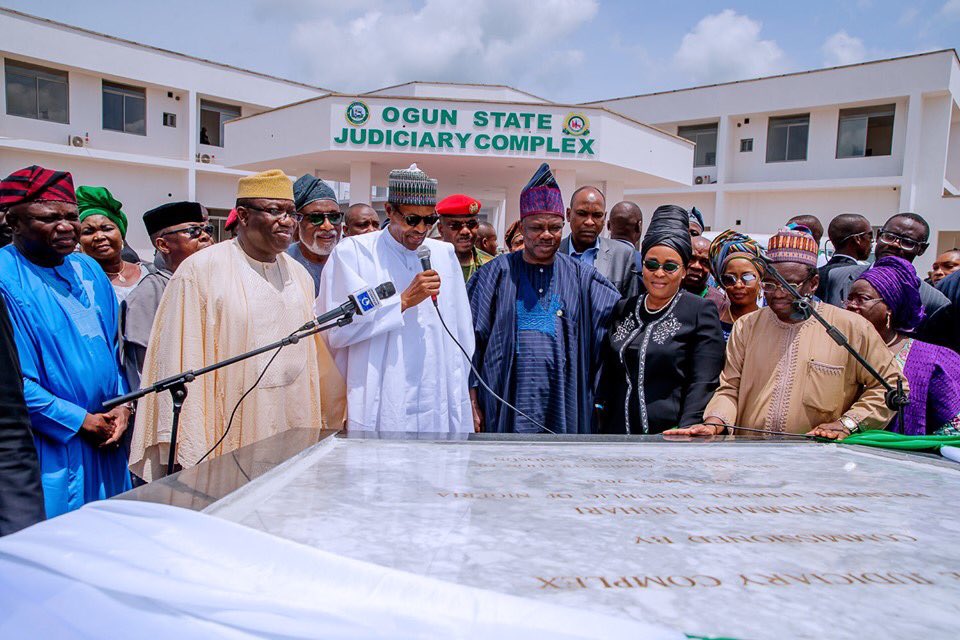 President Muhammadu Buhari on Saturday said the outgoing governor of Ogun State, Ibikunle Amosun, is a clever person who has done well for himself and the state while at the helm of affairs for eight years.

Mr Buhari stated this while on a state visit to commission four projects and inspect 250 beds MTR Multi-Specialist Hospital in Abeokuta, the State capital.

The president gave kudos to the outgoing governor on his performance, pointing out that Mr Amosun was well prepared for the governorship seat.

‘I think he prepared for the governorship seat. He prepared himself for it, he has put infrastructure that will last. I congratulate him for having the foresight and saving enough resources to make that his footprint remains permanent, very clever person.

“The infrastructure he took me through, the flyovers, the bridges, the hospitals and this complex, they are first class. He has done very well for himself and for Ogun State”.

He said he was optimistic that Mr Amosun, who is resuming as senator at the National Assembly after his exit as governor, would support his administration as the president of the country, adding that he (Buhari) is in the good books of Mr Amosun.

“I think he can continue to serve, not only Ogun State, but the whole country. I am very pleased that I have been in his good books, at least, publicly. So, in the Senate, I believe where he is going to sit for four years and I am going to remain, God willing, for four years as the president, I will automatically assume that he will support me.”

Mr Amosun, in his speech, noted that his administration’s tenure would come to an end “in a matter of days.”

“Even as we prepare to bow out of office, our desire to continue to contribute our quota to the socio-economic development of our dear state remains undiluted,” he said.

“Today’s event is an eloquent testimony of that desire. Even at the twilight of the tenure of our administration, we continue to ensure that life becomes more comfortable and abundant for our people, through infrastructural development.”

The governor appreciated the efforts of the federal government for complementing the efforts of his administration towards the socio-economic development drive in Ogun State.

“In keeping with the tradition of ‘firsts’ in accomplishments in Nigeria, our dear state has continued to enjoy a pride of place, even in the programs and policies of the federal government.

“The government and the good people of Ogun State are eternally grateful to the administration of President Muhammadu Buhari for considering our dear state for the execution and implementation of many projects and policies.

“We also appreciate the economic policies of the federal government, which have continued to impact positively on the people of Ogun State.

“These include, but not limited to, policies such as encouraging patronage of made-in-Nigeria products, of which Adire Ogun is set to benefit immensely. There is also the concerted Agricultural Policy of the federal government on growing-what-we-eat, which has resultantly given birth to our dear State joining a league of rice-producing States through “MITROS Rice”.

“Also, let me specially thank our dear president for releasing part of the federal road construction refund and for the anticipated release of the balance in the coming months. At this point, it is also important that I thank the entire people of Ogun State for their support and cooperation in the last eight years.

‘We leave office with fond memories of the love and support we have received from our people. More importantly, we leave with our heads held high, and knowing that we have taken Ogun State a notch higher in terms of socio-economic development.”