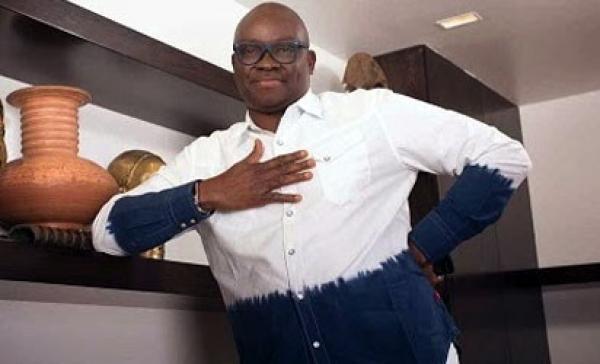 The immediate past Governor of Ekiti State, Ayodele Fayose, on Thursday said his successor, Kayode Fayemi, deserved to be chairman of the Nigeria Governors’ Forum, (NGF).

This is contained in a congratulatory message he sent to the Ekiti State governor.

Mr Fayose, in a statement made available to the News Agency of Nigeria (NAN) by his Media Aide, Lere Olayinka, said Mr Fayemi’s emergence as NGF Chairman was “well deserved of him and the people of Ekiti.”

He said: “I congratulate Governor Kayode Fayemi on his appointment and elevation as Chairman of the Nigeria Governors’ Forum (NGF)

“It is well deserved for you and the entire people of Ekiti. Politics will come and go, but Ekiti State will remain eternal

“Once again, you have my best wishes”, he said.

Mr Fayemi was defeated by Mr Fayose in the 2014 governorship election in Ekiti. Mr Fayemi, however, won the 2018 election to return as governor. He was inaugurated last October.

Meanwhile, prominent indigenes of state have asked Mr Fayemi to use the new office to advance the development of the nation and particularly Ekiti.

A former commissioner and current Chairman, Board for Technical and Vocational Education, Kayode Babade, who congratulated the new NGF chairman, described his emergence as a blessing to the state and the Yoruba race.

Mr Fayemi on Wednesday emerged the new NGF chairman through consensus, thus becoming the first in the history of the South West to attain such position.

Mr Babade advised him to use the new office to attract development and global support for Ekiti and to fight on the side of Nigerians by ensuring that there is equity and justice in the distribution of the nation’s wealth.

Mr Fayemi takes over from Zamfara Governor, Abdulaziz Yari for the next two years.

Mr Babade, who is also a former Leader of the State House of Assembly, said he was not surprised at the victory of Mr Fayemi based on his outstanding track records and leadership skills.

“Fayemi is a rare leader, he has displayed this uniqueness in all the offices that he has occupied. I want to congratulate the people of the state and the Southwest in general on this feat.

“I urge him to use the new office to reshape the politics of our state with this new position. The image of Ekiti has again been launched to a higher pedestal, being the first time a governor from our state and region will occupy this position.

In another statement, Sunday Adebomi, a retired army captian, congratulated the governor, describing his emergence as a welcome development, which according to him, is a manifestation of the confidence his fellow governors have in him.

Mr Adebomi stated that he had no doubt that Mr Fayemi would live up to expectation in the new assignment as a purposeful leader, fully committed to the advancement of APC and sustenance of democracy.

“I am confident that the governor will still surpass his predecessor, who used the position to negotiate for the disbursement of the Paris Club Refund and other intervention funds to states amid difficulties in the payment of salaries”.

NNPC and the Fuss Over Staff Re-Deployment By Gbenga Adeleke

NNPC and the Fuss Over Staff Re-Deployment By Gbenga Adeleke