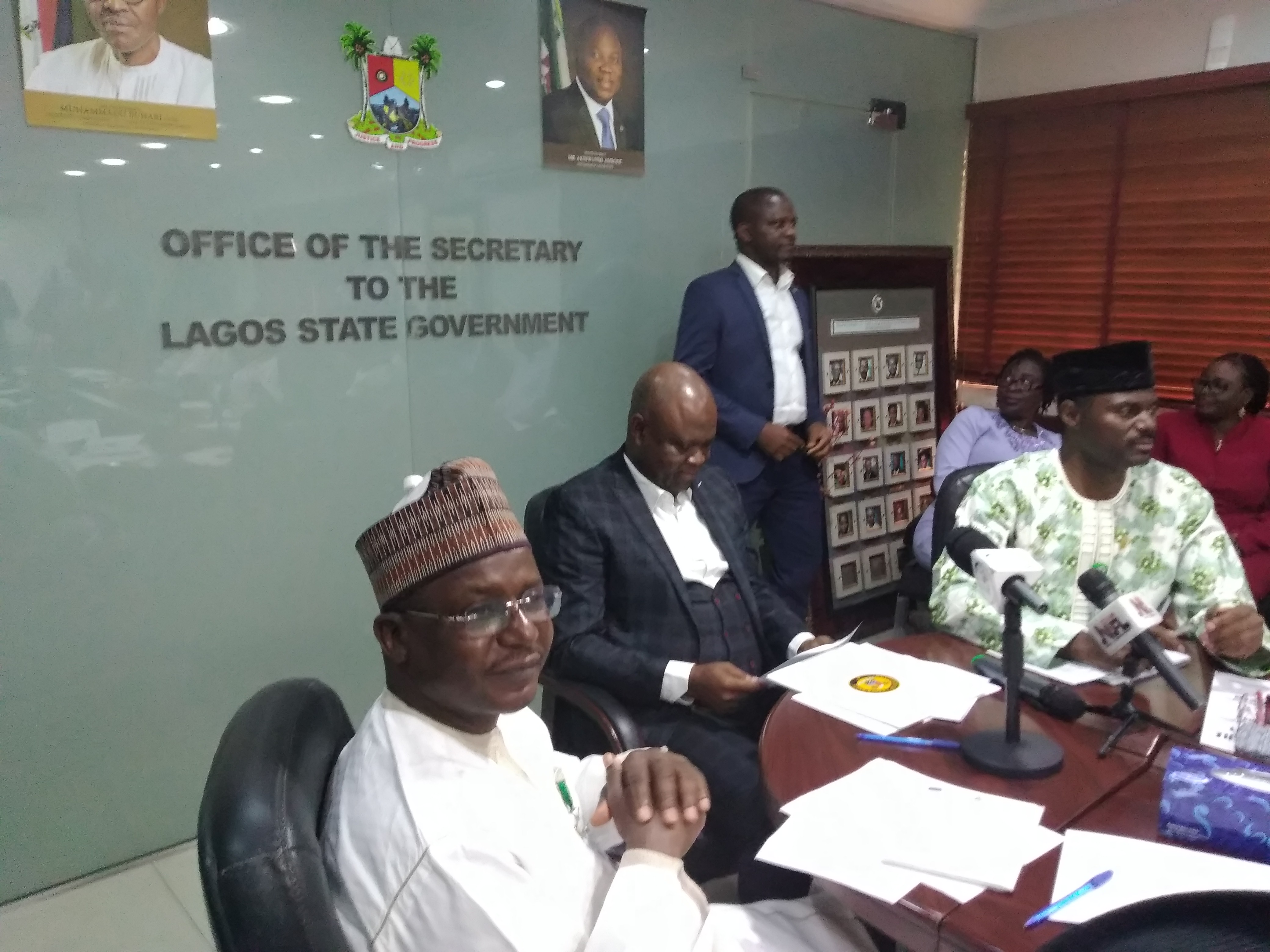 Jide Idris, Lagos state commissioner for health addressing the NIPSS delegation during a meeting on Tuesday.

#PHC4UHC: How technology will drive health insurance in Lagos – Commissioner

Lagos State is planning to fully roll out its state-run health insurance scheme in June.

Ahead of the launch, the government of the state said it adopted a technology based application to capture and ensure ease of access to the scheme by residents.

Jide Idris, the state’s commissioner for health, said technology will be vital to the success of the scheme.

He said this on Tuesday at a meeting with some Senior Executive Course participants of the National Institute for Policy and Strategic Studies, (NIPSS) in Lagos.

The NIPPS delegation is in the state for a study tour of its health sector. The visit is coordinated by NIPSS in collaboration with the Development Research and Project Centre (DRPC) through PACFAH@Scale.

Mr Idris, a former permanent secretary of the state, said the scheme was made mandatory for all residents and the government is currently creating awareness and capturing people into the scheme.

“With this technology, many people will be easily captured and they can easily access the scheme through the mobile application”, he noted.

He said the technology will also help in collection of data of those enrolled.

According to the official, about 120,000 residents have been enrolled into the scheme.

“All other funding schemes in the state will collapse into the state health insurance once it’s launched,” he noted.

THISDAY newspaper reported last December that the commissioner had in a statement, said the technology, ‘CarePay’ ICT platform was a mobile solution for the scheme administration.

It serves as a digital health exchange that would connect the three important stakeholders in healthcare scheme: payers, healthcare providers and the beneficiaries.

According to Mr Idris, the CarePay platform “will guarantee ownership of all data generated and ensure that these data can be used to make informed decisions”.

He said the technology will demonstrate how “digital mobile solutions can be utilised to improve decision-making and transparency, reduce transaction costs, and increase access especially for poor households.”

The Lagos State health insurance is an initiative targeted to reduce out-of-pocket spending for health by residents, especially the indigent.

Despite the promising features of the technology reeled out by the health commissioner, Mrs Ogbera said there was still poor knowledge of the scheme among residents of the state.

Mrs Ogbera, who also spoke to the NIPSS delegation on Tuesday, said raising more awareness is the “only way to make many people buy into the scheme.”

Role of HMOs in creating awareness

Just like Lagos, many other states have begun implementation of their State Health Insurance Scheme (SHIS).

Many states are proposing to disengage Health Management Organisations (HMOs) in establishing the scheme.

The Lagos State Government, however, said it would retain HMOs.

Adetokumbo Fabamwo, the Chief Medical Director, Lagos State University Teaching Hospital, in his presentation to the NIPSS delegation on Monday, said about 10 HMOs will be engaged.

He explained the role HMOs will play in creating awareness and capturing residents into the scheme.

“Registration is state-wide and that is why we decided to allocate HMOs to certain areas for ease of capture. If an HMO is said to cover Mushin for example, they will go out there and capture all the citizens of the area into the scheme because the higher the enrollees, the higher their capitation fee.

“If you tell people in Mushin to look for any HMO and join, enrolment will be slow. For the formal sector, we gave them a choice of HMOs to choose but for informal sector you allocate HMOs to them so as to achieve 100 per cent coverage.”

Many have linked poor coverage and service delivery of the National Health Insurance Scheme (NHIS) to the operations of the HMOs.

HMOs serve as the link between the scheme and the service providers.

The scheme disburses cash to HMOs, every three months, who in turn pay service providers monthly for health services of participants.

However, HMOs have allegedly not kept to that arrangement as service providers’ are unable to deliver adequate care.

Since inception, HMOs have received over N350 billion from the health insurance scheme.

The proposed bill to repeal the NHIS Act has passed third reading in the Senate and awaits presidential assent.

While the bill, which comprises of nine parts and 80 sections, makes health insurance mandatory for all Nigeria, it also makes the engagement of HMOs optional.

Meanwhile, PREMIUM TIMES reported how health experts agreed that health insurance should be made compulsory for Nigeria to achieve Universal Health Coverage (UHC) during the first phase of the NIPSS study tour in Abuja.