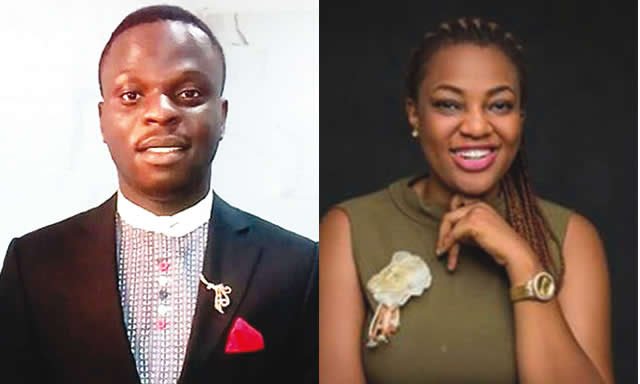 Lagos pastor confesses to having 10 sex tapes with ex-lover

A pastor in Lagos, Chris Omatsola, who appeared in a sex tape in November with his ex-lover, has revealed that there are more lewd videos, than the one which has gone viral.

Mr Omatsola, who leads Zionwealth of Life Assembly, claimed his ex-lover, Tamaratokoni Okpewho, recorded the videos on their phones because she enjoyed filming their intimate moments.

Mr Omatsola, an apostle, made the shocking revelation in a lengthy post on his blog, Zionweath News.

He wrote, “Princess and I had more than 10 sex tapes of ourselves on our phones as she enjoyed filming sex. I had deleted all our sex videos on my phone and she was aware and insisted she delete hers.

“Honestly, the sex-tapes were recorded sometimes in October 2017. She was holding the camera in some and I held the camera in others. We were both aware but we never knew it would go viral.”

He also shared a link to the post on his official Facebook page on Friday and hinted that he would no longer speak to the media about the issue.

Defending the decision to go public with his side of the story, Mr Omatsola, who also owns Krystal Properties, Lekki, said it was because he knows his ex-lover “will also come out with more lies and blackmail.”

“This day, I make bold to say with all honesty of heart and sincerity of purpose that it is true that I committed sexual fornication with Ms. Princess Tamaratokoni Okpewho.

“I have since repented and God has forgiven me. But I did not post our sex-tapes on the internet or assaulted her physically as she maliciously and fallaciously claimed and want us all to believe.”

He also shared details of how he found himself in the scandal.

“I met Princess Tamaratokoni Okpewho aka Toks David in September 2017, just before the Lekki Toll Gate after Quilox nightclub around 4:40 a.m.

“I was returning from a vigil in Adetokunbo Ademola, Victoria Island, that fateful day. She flagged down my car on the lonely road. She appeared drunk. Because it was dark and I thought it could be dangerous, I stopped and picked her.

“When we got to my house that night, she slept on the couch in the sitting room, while I slept in the bedroom.”

Mr Omatsola urged other pastors “to learn from his mistakes”.

“I also think ministers of God should learn from my fall. Watch your steps because the devil is on your tail.

“Be careful with women. Prayerfully help people. If you have fallen, don’t cover up. Seek God’s face with penitence and repentance.”

The scandal came to the fore in November after both parties clashed over the leaked sex video.

The controversial video was reportedly leaked by a phone repairer.

At the time, Ms Okpewho accused Mr Omatsola of releasing the video to force her into marrying him.

The cleric denied the claim, saying the video was leaked to blackmail him.

He would later allege that Ms Okpewho demanded N200 million from him.

Following the scandal, Mr Omatsola has since relocated his church to an unknown location.

He has also continued to post self-authored devotionals on his wall.