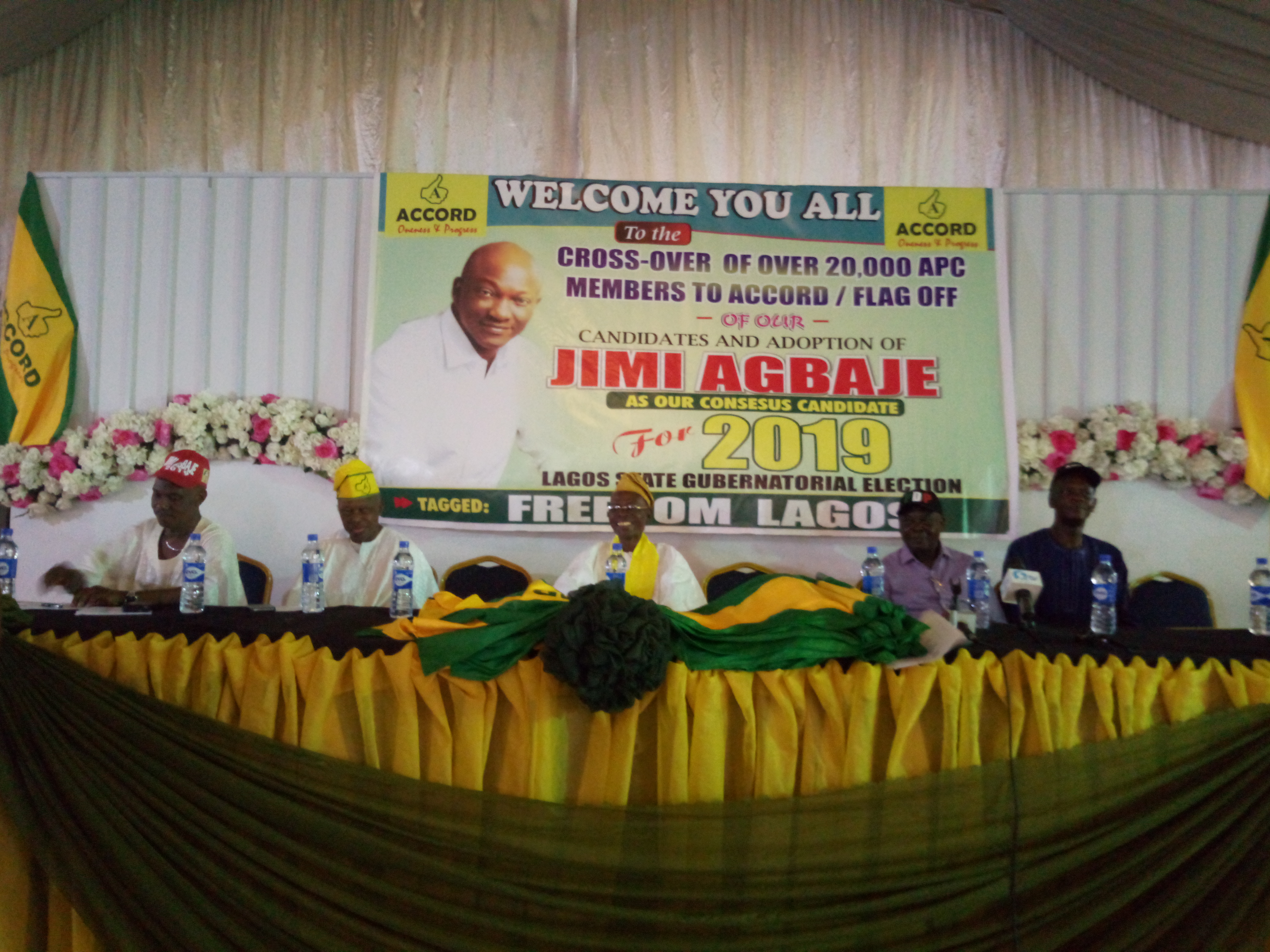 The Lagos chapter of Accord Party on Thursday formally adopted the Peoples Democratic Party’s Jimi Agbaje as their gubernatorial candidate for the 2019 election.

Mr Agbaje, while accepting the flag from the party, said the time has come to free Lagosians from bondage.

“I accept with all humility this honour you have shown us and the position you have endorsed us for,” said Mr Agbaje.

“As you have endorsed us easily, so shall we get to the government house easily and for those still on the other side, the freedom train is on the move and they should join when the momentum is not too much for them to catch up with.

“There is still space on the train now. It is time for freedom of Lagos and we say no to ‘Babasope.'”

The Accord Party also announced that it had welcomed 20,000 members who defected from the All Progressives Congress in the state.

The leader of the defecting APC members, Sunday Ajayi, said they left because of the level of impunity in the party.

“You are all aware of what is happening in Lagos for the past six months,” said Mr Ajayi, a former APC chairman in Orile -Agege.

“We did local government and state congresses, all in shambles because of one man Mr Impunity who believes without him we are nothing, and today we are here to show him he is no longer in the grass roots.

“We want to give them a Christmas gift of defection.”

Mr Ajayi said the “illegal kangaroo primaries” conducted by the APC about two months ago had candidates who paid for nomination forms being denied participation.

“It has never happened that a governor is denied second term because he is not a party man because you want to do abracadabra.

“Can you imagine such autocracy? But your wife is going for third term, we have people contesting for even fourth and fifth terms. Such impunity will no longer happen in Lagos. When we formed APC we were together but now we are disunited. They are gone in Lagos and Nigeria forever.

“He is going around planning himself for 2023, he believes in money but we believe in people in the grassroots and the grassroots people are waiting for him. We have thousands of people at home who have asked us to go ahead and they will follow us.

The chairman of the Board of Trustees of Accord Party, Isaac Adeniyi, said the party is poised to help unseat the ruling party in the state.

Nigerians react as unemployment grows by 4.3%

FG to Atiku: You are desperate