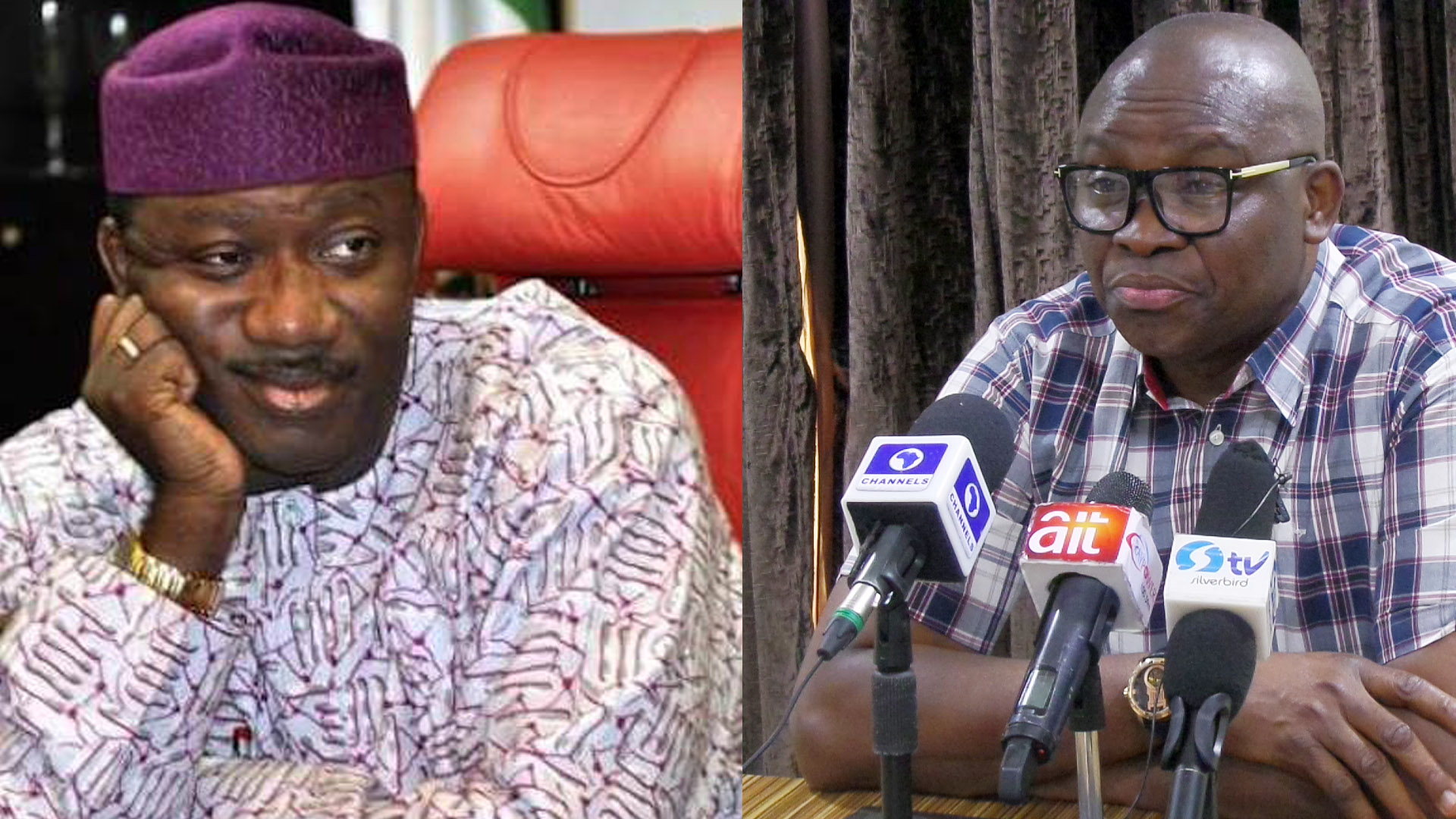 The Ekiti State Governor, Kayode Fayemi, and his predecessor, Ayo Fayose, are at loggerheads over the actual status of the state’s indebtedness under the last administration.

Mr Fayemi renewed the long standing controversy when at his inauguration on Tuesday, he said preliminary findings had shown that the Fayose administration had plunged the state into a debt of about N170 billion.

His allegation echoes Mr Fayose’s assertions when he took over in 2014 that Mr Fayemi had left office with a debt commitment which would not be liquidated until 2036.

But Mr Fayose’s media aide, Lere Olayinka, on Wednesday replied the governor, saying the state’s debt profile under the last government was not more than N60 billion, warning that the new governor was heading towards failure by his initial missteps.

He also said that the debt was either directly incurred during Mr Fayemi’s first tenure or as a result of the loans restructuring done at the instance of the federal government and the Federal Economic Council.

Mr Olayinka challenged Mr Fayemi to name the banks being owed the N170 billion and monthly repayments by the state government to such banks.

“He should not wait till 100 days to cook up false stories of how much debt was left by the Fayose administration. He should rather tell Nigerians how it is possible for a state that is indebted to the tune of N170 billion to be making N1.1 billion repayment monthly,” Mr Olayinka said.

“Instead of lying so blatantly to cover up his impending failure, Fayemi should publish the Debt Management Office (DMO), Ekiti State Executive Council and House of Assembly approvals for the loans since no loan can be taken without these approvals.

“The reality is that Fayemi is reputed for speaking from both sides of his mouth. In the past, when Fayose assisted him to be governor, he described him (Fayose) as an honourable person whose word is always his bond and today, he goes about denigrating the same Fayose.

“The federal government deliberately refused to release legitimate funds belonging to Ekiti State to the Fayose administration and for this reason, the arrears of salary could not be cleared as promised.

“We are aware that in a matter days, the withheld fund of over N30 billion is to be released to the state by the federal government as refund on federal roads construction, arrears of budget support and Paris Club refund.

“Our plea is that Governor Fayemi should stop making excuses and use the over N30 billion to pay workers salary.”

However, a statement by the Chief Press Secretary to the governor, Olayinka Oyebode, on Wednesday, appeared to have reviewed the governor’s earlier statement of N170 billion indebtedness down to N120 billion.

The statement read in part:

“The truth about the actual financial records of Ekiti State is now in the open going by the debt figures voluntarily submitted to statutory regulators, the Debt Management Office by the outgoing government of Governor Peter Ayodele Fayose in Ekiti State,” the statement read.

“Contrary to repeated claims by the Fayose Administration that Fayemi plunged the state into a debt burden that will not be paid off till 2036, it is now clear than the bond taken by the Fayemi administration is almost completely paid off with the first tranche of N20bn to be completed in October 2018 and the second tranche of N5bn bond due for payment in 2020.

“The report revealed that the domestic debt of Ekiti State leapfrogged by N3bn within the last three months from N117bn to N120bn between March and June 2018 making Ekiti state debt to quadruple since Fayose assumed office as the Governor in Ekiti State from N31bn in 2014 to N120bn.

“Although Governor Peter Ayodele Fayose recently got the approval of Ekiti State House of Assembly to further incur expenditure of N10bn barely 30 days to the end of his tenor as Governor of the State, current debt figure of N120bn does not include outstanding subventions due to tertiary institutions namely: Ekiti State University (EKSU), College of Education and College of Health Technology which is in excess of N5bn and N4.8bn 8months arrears of salaries and allowances due to the Local Government workers in the state and other contractual obligations not reported since end of the second quarter of this year.

“There is also no doubt that contractor’s obligations have been grossly understated in the report due to obvious reasons and until a proper review of the debt of the state is carried out by the incoming administration, it will be near impossible to determine accurately the indebtedness of the state and the damage done by the outgoing government.”

Mr Fayemi had on Tuesday vowed to commence a probe of the last government with a view to ascertaining the true financial position of the state.

He also promised to ensure the probe was carried out within the first 100 days in office.

Meanwhile, Mr Fayose is currently in the custody of the Economic and Financial Crimes Commission over allegations of fraud, a query he could not answer as governor due to the constitutional immunity he enjoyed as a state governor.

Disquiet in Enugu APC over ‘imposition of candidates’