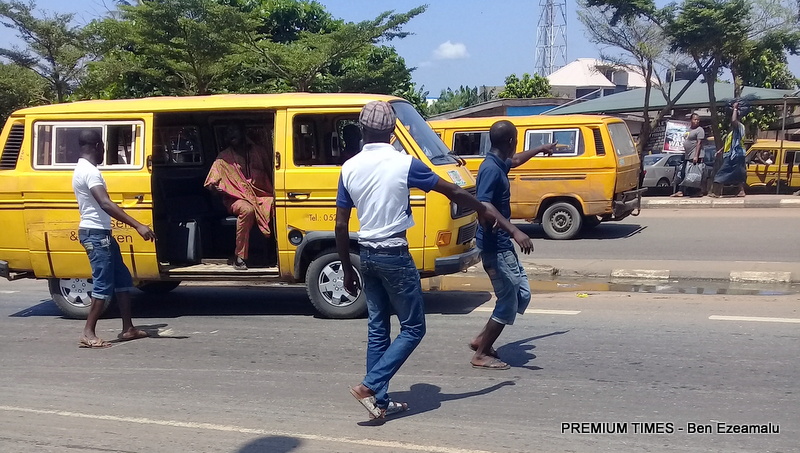 Dozens of commercial bus drivers on Wednesday blocked the LASU-Iyana Ipaja road to protest alleged harassment and extortion by police officers and officials of the Lagos State Task Force.

The protest which started at College Bus Stop was later moved to Igando market as all commercial buses were forced to discharge their passengers and join the march.

A driver who identified himself as Sir K narrated the state officials’ incessant harassment on them.

“The task force block our vehicles at both front and back with Danfo, LT, and their vehicles that are loaded with touts.

“You know that Igando is an authorised park, the task force will come with a bus that is loaded with touts and block the road from both front and back, all the yellow buses at that moment are in trouble.”

He said the law enforcement agents are accompanied by police officers and use commercial vehicles to disrupt their means of livelihood, harassing and illegally extorting them daily.

“Our buses are being seized by this task force, the owners will bring it back with a towing vehicle. The task force, who do not have any means of identification, collect within the range of N20,000 to N30,000 and they do not ask for their driving license or any relevant documents.

“Since they (task force) perceive that we respond to them fast, they have now turned this route to an ATM station 24/7, once they resume in the morning they close around 4 p.m. to 5 p.m.

“Today they came to our park (College Bus Stop) shooting guns, although it was not a stray bullet, they took all the buses at our base and those ones that they could not seize, they damaged the windscreen.”

Another bus driver, who identified himself as Eniolorunmo, said their protest is not to fight or disrupt the community peace but to express their dissatisfaction over the extortion by the task force.

He said they would go on strike so commuters can have a sense of what they are going through.

The protest caused a gridlock which lasted about an hour before the police and military arrived.

Abdulrafiu Aneru, who led the team of police officers to the scene, told PREMIUM TIMES that the situation is under control.

When contacted, Chike Oti, the Lagos State police spokesperson, denied the claims of extortion by the task force officials.

Last July, the police had issued a statement banning its officers from operating in mufti and commercial vehicles such as the yellow buses popularly known as Danfo or other commercial buses.