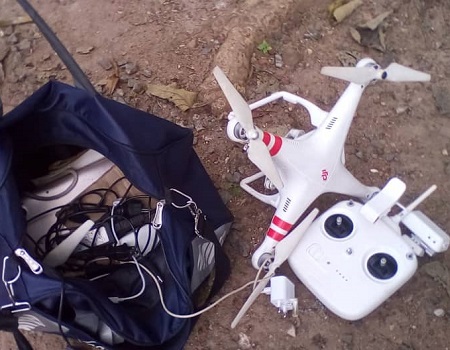 Two persons were on Tuesday arrested for allegedly flying a drone over the private residence of former governor of Ogun State, Segun Osoba.

The aide of the former governor, Adekunle Adeyemi, disclosed this in a press statement made available to journalists.

The two suspects, a lady and a young man, whose identities were not disclosed were allegedly caught by the private security guards attached to Mr Osoba’s house, located within the Government Reservation Area, Ibara Abeokuta, Ogun State’s capital.

Mr Adeyemi said the suspects allegedly flew the drones to monitor activities in the compound, adding that the drone was later shot down by Mr Osoba’s security aides followed by the arrest of the suspects, who, on interrogation, could not give satisfactory answer for the action.

He described the action as a breach of Mr Osoba’s security, recalling that a few years ago, unidentified people invaded a part of the same building and dug out buried armoured cables.

He said the former governor just returned from a trip to the United Kingdom on Tuesday and was in his Abeokuta home in preparation for a meeting to discuss a hitch-free conduct of the presidential primary of the All Progressives Congress scheduled for Friday.

“This will be another breach of security of Chief Osoba’s private security. A few years ago, unidentified persons invaded part of the compound and took reasonable time to dig out buried armoured cables. This was done in most professional manner.

“It will also be recalled that sometime ago, two bungalows on the premises were vandalised by unidentified hoodlums. Another breach was when insulting graffiti were written round the fence of Chief Osoba’s house, not too long ago,” the statement highlighted.

Mr Adeyemi added that, “those involved in the latest action have been handed over to an arm of government agencies for investigations.”

The Ogun State Police spokesperson, Abimbola Oyeyemi, when contacted, said he was not aware of the arrest.

“I am not aware of such arrest,” he said.

Data shows heart disease as Australia’s leading cause of death