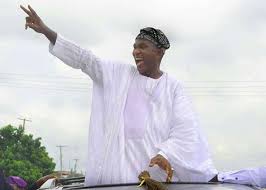 The former secretary to the Osun state government and governorship candidate of the Action Democratic Party (ADP) in Osun State, Moshood Adeoti, has begun his campaign rally in Ilesa towards the gubernatorial election of September 22.

The rally, held at the Eid’ praying ground, Imo street, Ilesa, had in attendance many chieftains of All Progressives Congress, APC, who had defected to the ADP.

Mr. Adeoti dumped the All Progressive Congress (APC) to pick the governorship ticket under the ADP after Gboyega Oyetola emerged as the APC candidate in the primaries.

While addressing the electorates, Mr Adeoti urged people not to vote for “Lagos Agenda”, assuring that his government will not take the state wealth to Lagos, if elected.

He assured workers of prompt payment of salary and pension, appealing to people to vote for him.

He vowed that he will constitute a panel to look into the programmes of the present administration under Aregbesola and review it for the betterment of the people of the state.

“We are going to set up a panel to look into the policy of the present administration. We will remove those that are not good and continue the good ones.

He said his government will also develop sport and give royal fathers their dues without marginalising anybody.

“We will not dictate for the party. The party will tell us what they want and we are going to comply with the party’s dictate.

The state chairman of the party, Olalekan Akinola, had earlier presented the party’s flag to Mr Adeoti, urging the people of Ilesa to vote for ADP.

Fayemi: I’ll leave what Fayose did in Ekiti to God