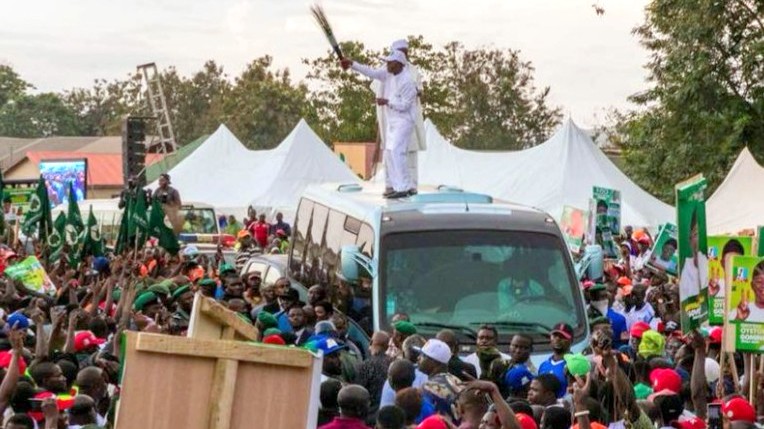 APC Flags Off Campaign In Omisore's Home, Gets Ooni's Blessing

Ahead of the September 22 governorship election, the ruling All Progressives Congress (APC) on Tuesday kicked off its campaign in Ile Ife, the home of Iyiola Omisore, a major contender under the platform of Social Democratic Party (SDP).

The outgoing governor, Rauf Aregbesola, led the campaign team to the palace of Ooni of Ife, Adeyeye Ogunwusi, to receive royal blessings for the party’s candidate, Gboyega Oyetola.

The monarch, while blessing Mr Oyetola prayed for success of his quest and assured Mr Aregbesola’s legacy could help his electoral victory.

Speaking at the palace, Mr Oyetola said serving with Mr Aregbesola is more than enough training for him on how to govern the state.

“I know where we started. I know where we are. I am not a candidate who needs any tutorial to lead Osun. As an apprentice, eight years are more than enough training period for anyone. I am the most suitable person to continue from where we are,” the APC candidate said.

Addressing the crowd after leaving the palace, Mr Aregbesola said their coming to Ife was for two reasons – to seek Ooni’s blessings and seek the votes of Ife people.

“Ooni has blessed us. He pointed out that today, Tuesday signifies victory, meaning Oyetola will record victory. God is with us. He has given us the wisdom and strength to take Osun to the promised land.

“After our initial foundation that must be laid by a maverick like me, now that we have laid a solid foundation, there is need for somebody with gentle disposition like Oyetola to continue with the construction of the super structure.”

He pleaded with the residents to “vote for the progress of the state by way of continuity.”

He also said party members who have defected may still consider returning and that their spaces are still open.

Party leaders who addressed the crowd include: APC Chairman in Osun State, Gboyega Famoodun and the state’s Deputy Governor, Titilayo Laoye-Tomori, amongst others.

Voters were urged to shun violence with opposition parties and encouraged to vote for APC on September 22.