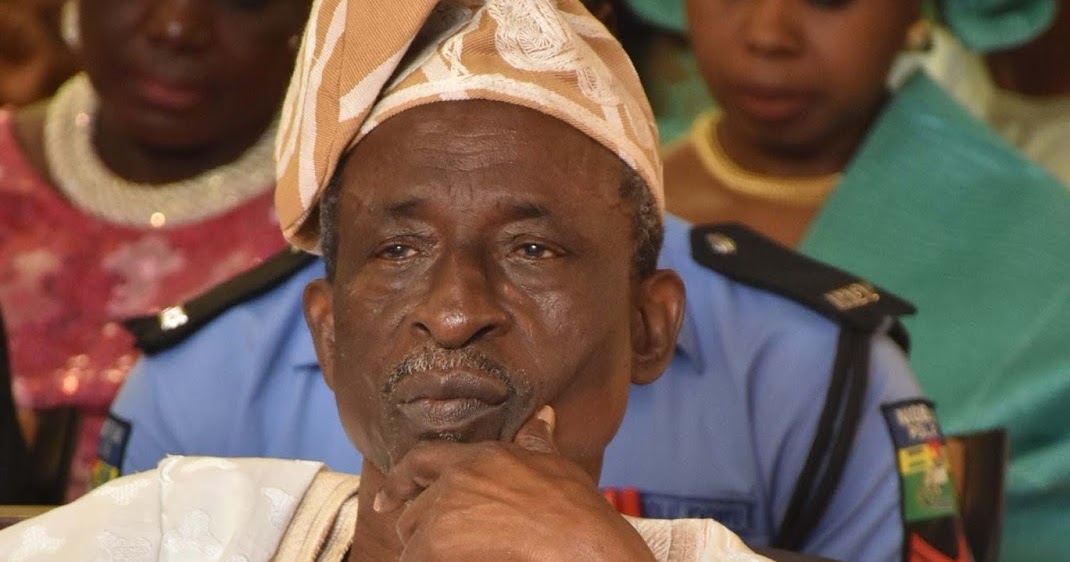 Alani Bankole, the father of former Speaker of House of Representatives, Dimeji, has petitioned the Inspector-General of Police, Ibrahim Idris, accusing the Ogun State Governor, Ibikunle Amosun, and Attorney-General of the state, Olumide Ayeni, of flouting a court order on a land matter involving him and the governor.

But the governor in a swift reaction on Sunday through Mr Ayeni said he would not join issues with Mr Bankole on the pages of newspapers.

Messrs Bankole and Amosun had filed separate suits before the State High Court in Abeokuta over the land.

But delivering judgment March 10, 2014 in suit number AB/335/2012 filed by Mr Bankole, Justice O.O Majekodunmi ruled that the revocation of the allocation of the land by the state government and its acquisition by Mr Amosun was illegal.

“It is hereby declared that the purported acquisition of the claimant’s land situated at Plot 1, Block V1, Ibara Commercial Centre, Ibara, Abeokuta,Ogun State is illegal, null, void and of no effect,” the court ruled.

“The purported revocation of the claimant’s right of occupancy over the land in dispute is hereby set aside, an order is hereby granted restraining the 1st defendant, his agents, privies and other representatives from disturbing the claimant’s quiet possession of the property situate at Plot 1,Block V1, Ibara Commercial Centre, Ibara, Abeokuta, Ogun State, save the portion which a road has already been constructed.”

Following the failure of the state government to comply with the judgement, Mr Bankole filed an amended originating summon dated February 2 this year but filed on February 5 before Justice Mobolaji Ojo at the High Court, Abeokuta.

Suit number AB/513/2017 prayed the court for reliefs “declaring the defendant’s action in entering, possession, excavating and erection of fence on the land without complying with the provisions of Section 44 (1) of the Constitution and Section 28 of the Land Use Act as illegal, unlawful, unconstitutional, null and void.”

Granting the prayers, the court ruled that the “purported revocation of the claimant’s right of occupancy vide notice of revocation dated 25th day, May 2012, is hereby set aside.”

The court added that the said notice of revocation (Exhibit G), was “also set aside to the extent that it affects, relates to, touches and concerns the claimant’s land.”

The judge then stated “An order of perpetual injunction is hereby granted restraining the defendants, their servants, agents, or any other claiming through them from interfering with or disturbing the claimant’s possessory right and quiet enjoyment of the land in dispute, and from taking any or further steps pursuant to the purported notice of acquisition dated the 25th day of May 2012.”

Apparently not satisfied with the judgments, the respondents filed a counter affidavit and written address at an Appeal Court in Ibadan, Oyo State Capital, which was brought to the notice of Ogun State High Court.

Justice Abiodun Akinyemi, in his ruling on the counter affidavit delivered on July 18, granted an injunction pending appeal “restraining the respondent from enforcing or taking any step to enforce the declaratory reliefs granted by the said judgment under relief 1 of the judgment,” adding that “there shall be no order as to cost.”

However, Mr Bankole alleged that Mr Amosun and his agents had commenced work on the land, despite the judgments in his favour and the latest ruling ordering the two parties to desist from taking possession of the land pending the determination of the case in the appeal court.

He said the development made him to write a petition to the Inspector-General of Police to call the governor to order, “before the situation gets out of hand.”

Mr Bankole further alleged that in a desperate move to deceive the judge, Mr Amosun through his agents moved to the land at about 2.30 a.m of July 16 to evacuate everything on the land.

“However, to my great surprise, while I took the ruling in good fate, Governor Amosun and his agents immediately moved to the land and commenced construction on it.

“Please be informed that all these rascality and diabolical impunity being perpetrated by Governor Amosun is being supervised by policemen attached to the Government House, some of who are permanently stationed at the site to provide cover for the illegality,” Mr Banoke stated in the petition.

The petition, attached with photographs of the policemen assigned to the controversial land, added further that, “I could not fathom the reason Governor Amosun is desperately trying to hijack a land that legitimately belong to me. This is the height of Executive rascality and disregard for rule of law by a man who swore to respect the constitution of our country.

“I will like to put it on record that no man has monopoly of rascality. The Governor’s attitude, despite being the Chief Security Officer of the State is capable of setting the State on fire, but as a man who is unrepentantly committed to the peaceful co-existence of Nigeria, and who believes that two wrongs can never make a right, I hereby request you, as the man saddled with the responsibility of maintaining peace and order to intervene and ensure compliance to the various judgments and ruling of the Ogun State High Courts.”

When contacted, the Ogun State Commissioner for Justice and Attorney-General, Mr Ayeni, who is the second defendant in the case, said he was not ready to respond to the issue on pages of newspapers.

‘If it is in relation to Chief Alani Bankole , I am not interested. I don’t believe in third party information, I have not seen the petition, so I will not comment on it. I don’t join issues on pages of newspapers. I join issues in court. Good bye,” Mr Ayeni said to our reporter.

One dead in Delta church collapse